Dr. Jonathan Backer is Einstein’s professor and chair of molecular pharmacology and a leading bench researcher on phosphoinositide 3-kinases, cellular proteins linked to various cancers. After hours, though, you may find him at a different kind bench: a piano bench, playing virtuoso variations with the New Rochelle Jazz Orchestra. 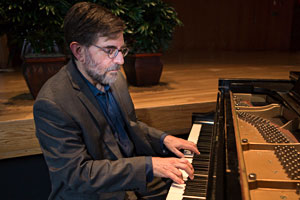 Before pursuing his medical degree and a career in research, Jonathan Backer, M.D., tried his hand as a professional jazz pianistAt a recent show, he improvised smooth solos, provided key support and, as co-bandleader, set a cool vibe in the room with his announcements of each song.

“One of the sax players serves as musical director during rehearsals, but I do pretty much everything else—finding rehearsal space, setting up the schedule, picking new arrangements for the band, getting gigs and making sure we have a full band every week,” said Dr. Backer. He has been with the orchestra, a mix of 17 semi-professional and professional musicians and music educators, for eight years. He has also played for three years with the Fairfield Counts, a Connecticut swing band that performs at summer concerts and festivals.

If few people at Einstein know of Dr. Backer’s musical talents, it is because he keeps his work and playing separate. He has never performed on campus. The only evidence in his office of his extracurricular passion are photos of jazz musicians Charlie Parker, Thelonious Monk, Charles Mingus and Roy Haynes at the Open Door in 1953 and of a Romare Bearden poster, “Out Chorus.”

That is not to say that music and science do not inform each other. “Experimental science and improvised music share a sense of solving problems—how to negotiate a harmonic sequence, how to fit one rhythmic pattern into another, how to respond to something another player does,” he said. “And you have to be willing to take chances. To quote [jazz saxophonist] Ornette Coleman, ‘It was when I found out I could make mistakes that I knew I was on to something.’” 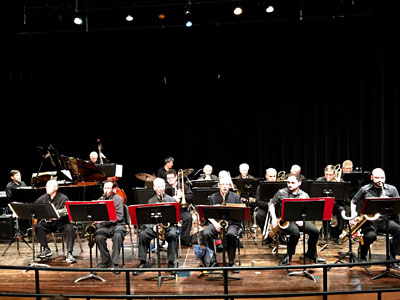 In his spare time, Dr. Backer enjoys performing with the New Rochelle Jazz Orchestra —Listen to their music!But there are differences too. “In improvised music, many solutions may work, but in science, reality imposes a rigid boundary—the cell does things a certain way,” he said. “Also, science pays better than music.”

He should know. After years of piano lessons and some private instruction at the New England Conservatory with Ran Blake and Jaki Byard, Dr. Backer entered Harvard University and majored in biochemistry. But upon graduating in 1979, he felt a stronger affinity to music than molecules and headed for New York City. “I found a loft on the Bowery above a restaurant called Phoebe’s that’s still there,” he said.

His day job in a Tay Sachs testing laboratory at Mount Sinai was “extremely boring” but fit his criterion of paid work for set hours, leaving him free to live the night life.

“I got to play with great people—John Zorn, Ned Rothenberg, Denis Charles, Tom Cora, Robert Dick,” he said. But making a living as a jazz pianist? “I failed,” he said, offering no excuses about the statistically negligible chances of success in a crowded city music market. Such unblinking self-assessment has likely made Dr. Backer the successful scientist and leader that he is.

Having It All as Musician- Scientist

After four years in New York living on the cheap, Dr. Backer entered Harvard Medical School, graduated, and then skipped residency training to pursue postdoctoral studies with Morris White and Ron Kahn at the Joslin Diabetes Center. He has been at Einstein since 1993.

And in the evenings, you know where he will be. Upcoming shows include a performance with the New Rochelle Jazz Orchestra, at 7:30 p.m. on August 31, at Hudson Park in New Rochelle, and with the John Fumasoli Trio at 7 p.m. on October 24, at Rosemary and Vine, in Rye. Samples of his performances with various groups can be found online; simply use the links provided or search for Jon Backer on www.Soundcloud.Com.