Home > Features > Ullmann At 50: Still at The Forefront of Multidisciplinary Biomedical Research

Ullmann At 50: Still at The Forefront of Multidisciplinary Biomedical Research

Since opening its doors 50 years ago, the Siegfried and Irma Ullmann Research Center for Health Sciences has epitomized the collaborative, multidisciplinary approach to biomedical research for which Einstein has become world-renowned. On Thursday, October 23, 2014, Einstein marked the 50th anniversary of the building's opening by hosting a special symposium, "Ullmann at 50: a Scientific Celebration of Groundbreaking Research in the Ullmann Research Center for Health Sciences," which was supported with generous funding from the Ullmann Family Foundation. 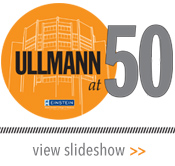 "We hope this event marks the beginning of another half-century of exciting innovation and scientific revelation," said Nancy Ullmann-Schneider on behalf of the foundation.

The impetus for constructing a home for biomedical research at Einstein came from Dr. Irving London, Einstein's founding chair of medicine, and Dr. Saul Korey, a recruit of Dr. London's who went on to found and chair the department of neurology. "Like me, Saul was a very strong advocate of bringing the strengths of molecular biology, cell biology, genetics, cancer biology and other disciplines to clinical medicine," said Dr. London. "We felt that it was imperative that the College of Medicine be grounded with these strengths both in educating students and in conducting research."

In 1958, Drs. London and Korey—themselves distinguished clinician-researchers—approached Einstein's dean, Dr. Marcus Kogel, to lobby for a new bench research facility that would attract the best doctors and researchers studying molecular biology, cell biology and genetics to join the College of Medicine's faculty. 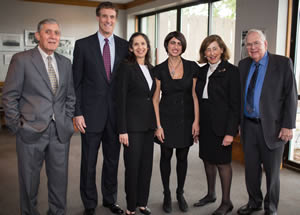 Einstein's Dean Allen M. Spiegel, M.D., with members of the Ullmann family (from left) Steven Schneider, Nancy Ullmann-Schneider, Nicole Ullmann, Lucia Ullmann and family friend Bill Mazo"Saul underlined what I had to say," Dr. London recalled, "and Marcus said that he would reflect on it and come to a decision very soon."

In May 1961, the College of Medicine announced a $2 million gift from Mr. and Mrs. Siegfried Ullmann toward construction of a "tower of learning." The National Institutes of Health provided an additional $2 million toward construction of the new $8.5 million research center. At the time, the award was the largest grant made under the auspices of a federal program providing matching building funds to medical and dental schools and nonprofit hospitals.

As Drs. London and Korey surmised, having the Ullmann building facilitated recruitment of top-notch faculty and scientists. Shortly after the ceremonial groundbreaking for the new building, world-renowned pathologist Dr. Harry Eagle joined the faculty to establish the department of cell biology. He later became the head of the new division of biology, which included the departments of molecular biology—founded by enzymologist Dr. Bernard Horecker—and developmental biology—created by biochemist Dr. Jerard Hurwitz. Einstein also was among the first medical schools to establish a department of genetics, which they did in 1961. It was headed by the prominent geneticist Dr. Salome Waelsch, and housed in Ullmann once the building was constructed.

"The new research center was to be a nexus for basic research in the biomedical sciences and very much part of the mission and vision of the medical school's founders, who created novel medical school departments—not only the traditional anatomy, biochemistry and physiology, but also molecular biology, cell biology, developmental biology and genetics," said Dr. Scott Emmons,professor of genetics and in the Dominick P. Purpura Department of Neuroscience, and holder of the Siegfried Ullmann Chair in Molecular Genetics.

Dr. Korey was among those closely involved in the planning of the 12-story building, suggesting the idea for its unique octagonal design. Its layout offered an innermost core that housed building services, such as duct and freight elevator shafts. This core was ringed on each floor by support services for the researchers—including temperature-controlled rooms, sterile rooms, electron microscopes and a conference room—that opened into a central corridor.

On the opposite side of the corridor were offices that led to labs, which were situated at the perimeter, along the window walls. The circular nature of the building's corridors also encouraged researchers to interact with one another.

"Natural light pours into laboratory windows 12 hours a day, as the sun rotates around the building," noted John Rasile, an architect in facilities and engineering at Einstein. "The design was meant to enhance productivity, because natural daylight energizes people."

Because of Ullmann's unique design, "there was increased communication as we constantly ran into each other in the circular hallways and shared equipment areas," noted Dr. Matthew Scharff, distinguished professor of cell biology and of medicine and the Harry Eagle Chair in Cancer Research/National Women's Division, who was among junior faculty recruited to work in the new building. "It created a unifying influence among colleagues that spread throughout the campus."

A Home to Centers of Targeted Investigation 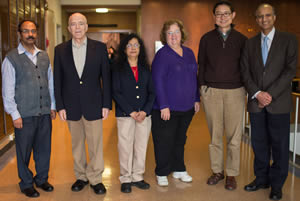 Members of the Marion Bessin Liver Research Center (from left): Drs. Jayanta Roy-Chowdhury, David Shafritz, Namita Roy-Chowdhury, Leslie Rogler, Liang Zhu and Sanjeev GuptaOver time, Ullmann served as home to several NIH-funded research centers, including the Albert Einstein Cancer Center, established in 1972 with Dr. Eagle as director; the Liver Research Center, launched in 1974 as the first institute in the nation devoted to the study of liver disease and injury, and initially directed by Dr. Irwin Arias; and the Human Genome Research Center, founded in the 1980s and led by Dr. Raju Kucherapati.

"The Liver Research Center included faculty members representing twelve academic departments—among them, biochemistry, biophysics and molecular biology," said Dr. Arias. "Most of the researchers didn't know about liver disease, and those who did learned what basic science could contribute."

As Ullmann neared completion, Dr. Korey was diagnosed with pancreatic cancer. He died seven months before the building opened. He would no doubt have relished the two-day colloquium that marked its opening, held at the College of Medicine on April 27 and 28, 1964.

Notable speakers at the colloquium, "Molecular Structure and Biologic Function," included Nobel Laureates Dr. Axel Hugo Theorell and Dr. Severo Ochoa. Other presenters were rising stars in the fields of quantitative biology, molecular biology and microbiology; one of them, Dr. Sydney Brenner, went on to win the 2002 Nobel Prize in Medicine.

"It was a prescient and impressive group of speakers," said Dr. Emmons,who headed the 50th anniversary planning committee.

Inspired by the forward-looking inaugural colloquium, the symposium committee invited speakers who are driving emerging research in cell regulation, the microbiome, neuroscience and bioengineering. They included Drs. Lucy Shapiro and David Relman, from Stanford, and Dr. Pamela Silver, of Harvard.

"We wanted a roster of scientists who will be as important in their fields 50 years from now as the speakers at the 1964 colloquium were during their careers," said Dr. Emmons.

The Melding of Medicine and Science

Also in 1964, in connection with the promise that Ullmann's facilities and researchers represented, Dr. Alfred Gilman, founding chair of pharmacology, took on the challenge of running the school's newly launched Medical Scientist Training Program (MSTP). Established with one of just three grants awarded by the National Institute of General Medical Sciences of the National Institutes of Health, the program offered a combined M.D.-Ph.D. degree.

Over its own 50-year history, Einstein's MSTP has become one of the most highly regarded in the nation—in no small part because of the seminal contributions of the school's scientists in such fields as biophysics, developmental biology, liver and blood studies, microbiology and neuroscience.

Reflecting on the accomplishments celebrated during "Einstein at 50," Dr. Emmons noted, "Ullmann continues to be a center for groundbreaking work and has fulfilled its purpose as 'a tower of learning' in every way. I think Drs. London, Korey and Kogel would be pleased to see how their vision continues to positively influence research at Einstein."