NEW YORK (March 26, 2014) – Migraine sufferers who experienced reduced stress from one day to the next are at significantly increased risk of migraine onset on the subsequent day, according to a new study conducted by researchers at the Montefiore Headache Center and Albert Einstein College of Medicine at Yeshiva University. Stress has long been believed to be a common headache trigger. In this study, researchers found that relaxation following heightened stress was an even more significant trigger for migraine attacks. Findings may aid in recommending preventive treatments and behavioral interventions. The study was published online today in Neurology®, the medical journal of the American Academy of Neurology. 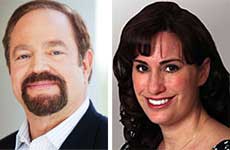 “This study demonstrates a striking association between reduction in perceived stress and the occurrence of migraine headaches,” said study lead author Richard Lipton, M.D., director, Montefiore Headache Center, professor and vice chair of neurology and the Edwin S. Lowe Chair in Neurology, Einstein. “Results were strongest during the first six hours where decline in stress was associated with a nearly five-fold increased risk of migraine onset. The hormone cortisol, which rises during times of stress and reduces pain, may contribute to the triggering of headache during periods of relaxation.”

“This study demonstrates a striking association between reduction in perceived stress and the occurrence of migraine headaches.”

“This study highlights the importance of stress management and healthy lifestyle habits for people who live with migraine,” said Dawn Buse, Ph.D., director, Behavioral Medicine, Montefiore Headache Center, associate professor, Clinical Neurology, Einstein, and study co-author. “It is important for people to be aware of rising stress levels and attempt to relax during periods of stress rather than allowing a major build up to occur. This could include exercising or attending a yoga class or may be as simple as taking a walk or focusing on one’s breath for a few minutes.”

Sponsorship: This study was supported by an investigator initiated grant from ENDO Pharmaceuticals, Chadds Ford, PA.