October 10, 2013 — (BRONX, NY) — Our ability to detect heat, touch, tickling and other sensations depends on our sensory nerves. Now, for the first time, researchers at Albert Einstein College of Medicine of Yeshiva University have identified a gene that orchestrates the crucially important branching of nerve fibers that occurs during development. The findings were published online today in the journal Cell.

The research focuses on dendrites, the string-like extensions of sensory nerves that penetrate tissues of the skin, eyes and other sensory organs. "The formation of dendritic branches—‘arbors’ as we call them—is vital for allowing sensory nerves to collect information and sample the environment appropriately," said Hannes Buelow, Ph.D., senior author of the Cell paper and associate professor of genetics at Einstein. "These arbors vary greatly in shape and complexity, reflecting the different types of sensory input they receive. The loss of dendritic complexity has been linked to a range of neurological problems including Alzheimer’s disease, schizophrenia and autism spectrum disorders." Dr. Buelow is also associate professor in the Dominick P. Purpura Department of Neuroscience.

The Human Genome Project, completed in 2003, revealed that humans possess some 20,500 genes and determined the DNA sequence of each. But for many of those genes, their function in the body has remained unknown. The newly identified gene falls into this "previously unknown function" category. In fact, the gene belongs to an entire class of genes that had no known function in any organism.

One way to learn what genes do is to study a model organism like the roundworm, which possesses a similar number of genes as people but only 956 cells, of which 302 are nerve cells (neurons). By knocking out or mutating roundworm genes and observing the effects, researchers can obtain insight into how genes influence the animal’s structure or physiology.

The Einstein scientists were looking for genes that organize the structure of the developing nervous system. They focused on a pair of roundworm sensory neurons, known as PVD neurons, which together produce the largest web of dendrites of any neurons in the roundworm—a sensory web that covers almost the entire skin surface of the worm and detects pain and extreme temperatures.

"The formation of dendritic branches — 'arbors' as we call them — is vital for allowing sensory nerves to collect information and sample the environment appropriately."

Suspecting that a gene acts in the skin to "instruct" nearby dendrites to branch, the researchers set out to identify the one responsible. To find it, they induced random mutations in the worms, singled out those worms displaying defects in PVD dendrite branching, and then identified the gene mutations that caused the defective branching.

This lengthy procedure, known as a genetic screen, was carried out by Yehuda Salzberg, Ph.D., the study’s lead author and a postdoctoral fellow in Dr. Buelow’s lab. The screen revealed that four mutations in the same gene caused defective branching of PVD dendrites. The researchers showed that this gene’s expression in the skin produces an extracellular protein that triggers normal branching of PVD dendrites during development. The dendritic branches of PVD neurons had previously been described as resembling menorahs, so the Einstein scientists named this gene mnr-1 and dubbed its protein menorin, or MNR-1.

The mnr-1 gene’s newly identified function in orchestrating dendrite branching is presumably not limited to roundworms. Versions of this gene are present in multicellular animals from the simplest to the most complex, including humans. Genes conserved in this way, through millions of years of evolution, tend to be genes that are absolutely necessary for maintaining life. 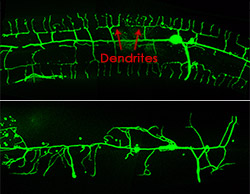 Click here to enlargeFurther study revealed that menorin synthesized in the skin was necessary but not sufficient to prompt PVD dendrite branching. The menorin protein appears to form a complex with SAX-7/L1CAM, a well-known cell-adhesion protein found in the skin and elsewhere in the roundworm. The researchers found evidence that dendrite branching ensues when this two-protein complex is sensed by DMA-1, a receptor molecule found on growing sensory dendrites.

"A fair amount was already known about factors within sensory neurons that regulate dendrite branching," said Dr. Buelow. "But until now, we knew next to nothing about external cues that pattern the sensory dendrites crucial to the functioning of any of our five senses. Hopefully, our success in finding two skin-derived cues that orchestrate dendrite branching will help in identifying cues involved in other sensory organs and possibly in the brain. Finding such cues could conceivably lead to therapies for replacing dendrite arbors depleted by injury or disease."

The authors report no conflicts of interest.