July 23, 2010 — (BRONX, NY) — For the third time in four months, the National Institute of Allergy and Infectious Diseases (NIAID) of the National Institutes of Health (NIH) has awarded Albert Einstein College of Medicine of Yeshiva University a research grant aimed at helping people infected with multidrug-resistant tuberculosis (MDR-TB). Taken together, all three NIH grants total $8.57 million. 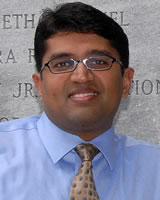 Neel R. Gandhi, M.D.The latest awardee – Neel Gandhi, M.D., assistant professor of medicine and of epidemiology & population health at Einstein – received a five-year, $4 million grant for the first-ever prospective study of antiretroviral therapy for people in South Africa who are co-infected with MDR-TB and HIV, the virus that causes AIDS. “Recent studies have shown that Africa is now facing a rising incidence of people infected with MDR-TB as well as HIV, raising concerns of a catastrophic convergence of the two epidemics,” said Dr. Gandhi, the study’s principal investigator.

According to the Joint United Nations Programme on HIV/AIDS, an estimated 5.7 million people in South Africa are living with HIV and AIDS - the highest prevalence of any country in the world. TB patients co-infected with HIV face an increased risk of developing active TB disease because HIV infection impairs the ability of the immune system to combat TB.

“No one has looked at how best to treat these patients,” said Dr. Gandhi. “The goal of our study is to gather evidence that will guide clinical practice and public health policy for MDR-TB/HIV disease worldwide.”

The study will involve 350 patients who live in the Tugela Ferry area of KwaZulu-Natal, South Africa where South African health officials estimate nearly 39 percent of pregnant women are infected with HIV. One hundred and fifty patients co-infected with MDR-TB and HIV will be given ART plus treatment for MDR-TB; their outcomes, as well as adverse events and their adherence to therapy, will be compared with: (a) 50 controls that have MDR TB, but not HIV, and (b) 150 controls that have drug-susceptible TB and HIV co-infection. 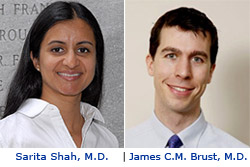 The control group patients will all receive TB therapy, and the 150 control patients with drug-susceptible TB and HIV co-infection will also receive ART. All patients will be followed for three years.

South Africa has the highest burden of HIV worldwide and a rapidly expanding MDR-TB epidemic. In South Africa and in other regions, co-infection with MDR-TB and HIV has been associated with exceedingly high mortality − up to 80 percent at one year.

In April, Einstein scientists were awarded a five-year, $3.9 million grant from the NIAID to study how extensively drug-resistant tuberculosis (XDR-TB) is transmitted in rural South Africa. “The findings could alter public health approaches for controlling the XDR-TB epidemic in the developing world,” said principal investigator Sarita Shah, M.D., M.P.H., assistant professor of medicine and of epidemiology & population health.

In May, James Brust, M.D., assistant professor of medicine, received a five-year, $665,000 NIAID Career Development Award to evaluate a novel, home-based treatment program he developed for patients co-infected with HIV and MDR-TB in rural South Africa. Until recently, MDR-TB was treated at centralized TB referral hospitals, with patients admitted for six months of treatment. However, with growing numbers of MDR-TB patients and limited healthcare infrastructure, this centralized approach is no longer working.