The new system, tested successfully on a small number of animals, could potentially prevent side effects associated with oral ED medications, if study results can be replicated in humans. That could mean safer and more effective ED therapy for millions of men with heart disease and other health problems affecting erectile function. The study is published today in the online edition of the Journal of Sexual Medicine.

Tens of millions of men worldwide have benefited from oral ED medications such as sildenafil (Viagra), vardenafil (Levitra), and tadalafil (Cialis). However, these medications — which belong to a class of drugs called phosphodiesterase type 5 (PDE5) inhibitors — have limitations. They can cause systemic side effects that can be serious. These side effects include headache, facial flushing, nasal congestion, upset stomach, abnormal vision as well as isolated reports of hearing and vision loss. Men who've recently suffered a heart attack or stroke or have severe heart disease should use these drugs with caution or not at all. In addition, "an estimated 30 to 50 percent of men with ED do not respond to oral use of PDE5 inhibitors," says senior author Kelvin P. Davies, Ph.D., associate professor of urology at Einstein.

The drug-delivery system, developed by Einstein scientists, consists of nanoparticles — each smaller than a grain of pollen — that can carry tiny payloads of various drugs or other medically useful substances and release them in a controlled and sustained manner.

The limited number of topical formulations of ED drugs has so far proven ineffective. This study was done to evaluate whether the Einstein nanoparticles, which have been shown to penetrate the skin, might allow the targeted delivery of compounds that treat ED and thereby avoid the drugs' systemic effects. 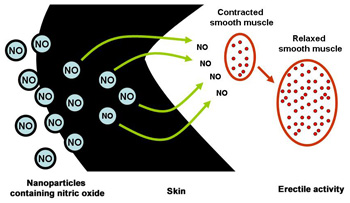 Nanoparticles developed by Einstein researchers can ferry
drugs or other medically useful substances across the skin.
In this study involving rats, nanoparticles contained nitric oxide
(shown above) or nitric oxide plus drugs sialorphin or tadalafil.
When carried across the skin, these agents relaxed smooth
muscle tissue, resulting in increased blood flow and erectile
activity.An effective topical therapy could be especially significant for those ED patients — particularly men with diabetes — who have reduced levels of nitric oxide (NO), the signaling molecule that dilates blood vessels responsible for erectile activity. These men, who often aren't helped by oral PDE5 inhibitor drugs, may benefit from direct application of NO or the PDE5 inhibitors.

"Most of the animals, nearly 90 percent, showed a response to treatment with the nanoparticles," says co-author Joel M. Friedman, M.D., Ph.D., professor of physiology & biophysics and of medicine. Dr. Friedman developed the nanoparticles with his son Adam Friedman, M.D., chief resident in the division of dermatology of the department of medicine at Montefiore Medical Center, The University Hospital and Academic Medical Center for Einstein.

"The response time to the nanoparticles was very short, just a few minutes, which is basically what people want in an ED medication," adds Dr. Davies. "In both rats and humans, it can take 30 minutes to one hour for oral ED medications to take effect."

Postmortem examination of the tissues at the site of administration showed no signs of local inflammation or toxicity. "In addition, when we applied the nanoparticles at therapeutic doses, we found no indication of systemic side effects," says Dr. Friedman.

The Einstein research team will carry out safety and dosing studies in rats in the coming months. Clinical studies on humans could begin in a few years if animal studies continue to show that the nanoparticle delivery system is safe and effective. But the investigators caution that the time from a proof-of-concept trial in animals to approved use in humans may be a decade or more.

The paper, "Nanoparticles as a novel delivery vehicle for therapeutics targeting erectile dysfunction," is published in the September 18, 2009 online edition of the Journal of Sexual Medicine. The lead authors are George Han, an M.D.-Ph.D. student at Einstein, Moses Tar, M.D., assistant professor of urology at Einstein, Dwaraka Srinivasa Rao Kuppam, a technician in the Einstein urology department, Adam Friedman, M.D., of Montefiore Medical Center, and Arnold Melman, M.D., chairman of urology at Einstein, also contributed to the research.