August 24, 2009 — (BRONX, NY) — Concussions, whether from an accident, sporting event, or combat, can lead to permanent loss of higher level mental processes. Scientists have debated for centuries whether concussions involve structural damage to brain tissue or whether physiological changes that merely impair the way brain cells function, explain this loss. Now, for the first time, researchers at Albert Einstein College of Medicine of Yeshiva University have linked areas of brain injury to specific altered mental processes caused by concussions.

The research, described in the August 26 edition of Radiology, provides compelling evidence that concussions involve brain damage. The findings suggest that diffusion tensor imaging (DTI), the brain scanning method used by the Einstein scientists, could help in diagnosing concussions and in assessing the effectiveness of treatments.

"DTI has been used to look at other brain disorders, but this is the first study to focus on concussions," said Michael Lipton, M.D., Ph.D., associate director of the Gruss Magnetic Resonance Research Center (MRRC) and associate professor of radiology, of psychiatry and behavioral sciences, and of neuroscience at Einstein and lead author of the study. "It proved to be a powerful tool for detecting the subtle brain damage that we found to be associated with concussions."

Each year, more than one million Americans sustain a concussion (technically referred to as mild traumatic brain injury). Concussions in adults result mainly from motor vehicle accidents or falls. While most people recover from concussions with no lasting ill effects, as many as 30 percent suffer permanent impairment — undergoing a personality change or being unable to plan an event. A 2003 federal study called concussions "a serious public health problem" that costs the U.S. an estimated $80 billion a year.

"By detecting brain injury early with DTI, and then initiating cognitive rehabilitation therapies for those patients, we may be able to limit the effects of concussions."

Michael Lipton, M.D., Ph.D.At present, diagnosis of concussions is based primarily on the patient's accident history and on clinical examinations that check for common concussion symptoms including headache, dizziness and behavioral abnormalities. There is no way of knowing from these exams who will suffer the most severe consequences and who will recover quickly. The results of the Einstein study indicate DTI scanning could provide a more objective way to diagnose concussions, determine whether brain injury has actually occurred following trauma, and possibly predict the lasting loss of executive function. Executive function refers to the ability to make decisions, organize, set priorities and manage time.

The Einstein research involved 20 people known to have suffered concussions (18 from motor vehicle accidents and two from falls) and 20 healthy control subjects. The patients were recruited from one hospital emergency room; two of them had lost consciousness, but only for a few minutes. Both the patients and control subjects underwent conventional brain imaging with magnetic resonance (MR) and computed tomography (CT) scanning, plus a battery of neuropsychological tests to assess executive function, which is often impaired after a concussion. All concussion patients underwent brain imaging and testing within two weeks of their accidents.

Experienced reviewers who evaluated the conventional MR and CT images of patients and controls found no abnormalities in either group. However, the neuropsychological results showed that the patients performed significantly worse than the controls on tests of executive function.

Patients and controls also underwent diffusion tensor imaging (DTI), a recently developed MRI-based imaging technique that can detect subtle changes in the brain by measuring the diffusion of water in the brain's white matter. DTI revealed abnormal brain regions in 15 of the concussion patients, while no abnormal regions were found in controls. Most importantly, the presence of major areas of structural damage in concussion patients (as shown by large alterations in normal water diffusion using DTI) predicted low scores on their executive-function tests. These damaged areas were located mainly in the brain's prefrontal cortex, which is essential for normal executive function and is susceptible to injury in concussion. 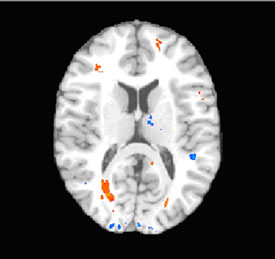 Colored areas show locations of brain injury,
including injury to the frontal lobe, in a patient
with mild traumatic brain injury.Dr. Lipton notes that use of DTI could prompt doctors to begin treatment early, when it's likely to be most useful. "The problems in functioning caused by concussions often don't become evident until weeks or months after the injury, suggesting that the brain pathology may actually expand over time," he notes. "By detecting brain injury early with DTI and then initiating cognitive rehabilitation therapies for those patients, we may be able to limit the effects of concussions."

"We are really excited by these findings," indicates Craig Branch, Ph.D., a co-author of the study and director of the Gruss MRRC. "For the first time we appear to be able to identify the subtle pathology sometimes caused by concussion, providing researchers a 'pathology target' for the development of therapies to reduce or eliminate the damage identified by this novel imaging method." Dr. Lipton adds that DTI could help in evaluating the effectiveness of existing therapies for concussion.