April 28, 2009 — (BRONX, NY) — A laboratory study by researchers at Albert Einstein College of Medicine of Yeshiva University suggests that an anti-cancer compound studied for treating blood cancers may also help in treating cancers of the head and neck. The work is reported in April 28th online edition of The Journal of Pathology. 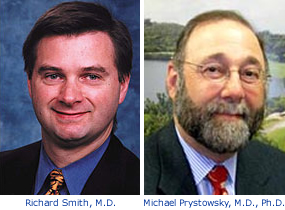 Head and neck cancer refers to tumors in the mouth, throat, or larynx (voice box). Each year about 40,000 men and women develop head and neck cancer in the U.S., making it the sixth most common type in the country. Surgery, chemotherapy and/or radiation are the main treatment options, but can cause serious side effects. Better treatments are needed, since only about half of patients with head and neck cancer survive five or more years after diagnosis.

The Einstein study involved a new class of chemotherapy agents known as histone deacetylase (HDAC) inhibitors, which affect the availability of genes for transcription resulting in protein synthesis. In many types of cancer, out-of-control cell growth results from certain genes that are either too active or not active enough in producing proteins. HDAC inhibitors appear to combat cancer by restoring the expression of key regulatory genes that control cell growth and survival to normal levels.

The Einstein researchers focused on a particular HDAC inhibitor known as LBH589 that has already shown some success in clinical trials involving people with cancers of the blood. The researchers found that LBH589 succeeded in killing tumor cells that had been removed from head and neck cancer patients and grown in the laboratory. 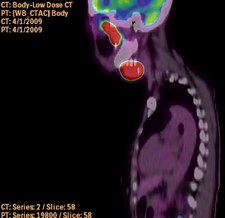 The patient shown in the PET/CT scan
above has advanced head and neck
cancer.The cancer is located primarily
at the base of the skull (upper red
area) and in the neck (lower red area).

"This report shows that an HDAC inhibitor is effective on head and neck cancer cell lines, and that is the first step toward use in humans" said Richard Smith, M.D., the lead clinician of the study. Dr. Smith is associate professor of clinical otorhinolaryngology-head & neck surgery and associate professor of surgery at Einstein, and is also vice-chair of otorhinolaryngology-head & neck surgery at Einstein and Montefiore.

The researchers also identified a set of genes whose expression levels change in response to the HDAC inhibitors—a finding that may help doctors identify patients most likely to respond to the drug. Plans call for testing LBH589 on head and neck tumor cells from more patients so that the set of genes that respond to the drug can be more firmly established.

"We are performing studies in mice to confirm these laboratory results, which hopefully will progress to human clinical trials of LBH589 for the treatment of head and neck cancer," said Michael Prystowsky, M.D., Ph.D., professor and chair of pathology at Einstein and corresponding author of the article.