April 1, 2009 — (BRONX, NY) — Scientists at Albert Einstein College of Medicine of Yeshiva University have proposed a sweeping new theory of autism that suggests that the brains of people with autism are structurally normal but dysregulated, meaning symptoms of the disorder might be reversible.

The central tenet of the theory, published in the March issue of Brain Research Reviews, is that autism is a developmental disorder caused by impaired regulation of a bundle of neurons in the brain stem that processes sensory signals from all areas of the body. 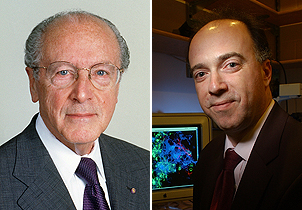 Dominick Purpura, M.D.    | Mark Mehler, M.D.The new theory stems from decades of anecdotal observations that some autistic children seem to improve when they have a fever, only to regress when the fever ebbs. A 2007 study in the journal Pediatrics took a more rigorous look at fever and autism, observing autistic children during and after fever episodes and comparing their behavior with autistic children who didn't have fevers. This study documented that autistic children experience behavior changes during fever.

"On a positive note, we are talking about a brain region that is not irrevocably altered. It gives us hope that, with novel therapies, we will eventually be able to help people with autism," says theory co-author Mark F. Mehler, M.D., chairman of neurology and director of the Institute for Brain Disorders and Neural Regeneration at Einstein.

Autism is a complex developmental disability that affects a person's ability to communicate and interact with others. It usually appears during the first three years of life. Autism is called a "spectrum disorder" since it affects individuals differently and to varying degrees. It is estimated that one in every 150 American children has some degree of autism.

Einstein researchers contend that scientific evidence directly points to the locus coeruleus—noradrenergic (LC-NA) system as being involved in autism. "The LC-NA system is the only brain system involved both in producing fever and controlling behavior," says co-author Dominick P. Purpura, M.D., dean emeritus and distinguished professor of neuroscience at Einstein.

The locus coeruleus has widespread connections to brain regions that process sensory information. It secretes most of the brain's noradrenaline, a neurotransmitter that plays a key role in arousal mechanisms, such as the "fight or flight" response. It is also involved in a variety of complex behaviors, such as attentional focusing (the ability to concentrate attention on environmental cues relevant to the task in hand, or to switch attention from one task to another). Poor attentional focusing is a defining characteristic of autism.

"What is unique about the locus coeruleus is that it activates almost all higher-order brain centers that are involved in complex cognitive tasks," says Dr. Mehler.

Drs. Purpura and Mehler hypothesize that in autism, the LC-NA system is dysregulated by the interplay of environment, genetic, and epigenetic factors (chemical substances both within as well as outside the genome that regulate the expression of genes).  They believe that stress plays a central role in dysregulation of the LC-NA system, especially in the latter stages of prenatal development when the fetal brain is particularly vulnerable.

As evidence, the researchers point to a 2008 study, published in the Journal of Autism and Developmental Disorders, that found a higher incidence of autism among children whose mothers had been exposed to hurricanes and tropical storms during pregnancy. Maternal exposure to severe storms at mid-gestation resulted in the highest prevalence of autism.

Drs. Purpura and Mehler believe that, in autistic children, fever stimulates the LC-NA system, temporarily restoring its normal regulatory function. "This could not happen if autism was caused by a lesion or some structural abnormality of the brain," says Dr. Purpura.

"This gives us hope that we will eventually be able to do something for people with autism," he adds.

The researchers do not advocate fever therapy (fever induced by artificial means), which would be an overly broad, and perhaps even dangerous, remedy. Instead, they say, the future of autism treatment probably lies in drugs that selectively target certain types of noradrenergic brain receptors or, more likely, in epigenetic therapies targeting genes of the LC-NA system.

"If the locus coeruleus is impaired in autism, it is probably because tens or hundreds, maybe even thousands, of genes are dysregulated in subtle and complex ways," says Dr. Mehler.  "The only way you can reverse this process is with epigenetic therapies, which, we are beginning to learn, have the ability to coordinate very large integrated gene networks."

"The message here is one of hope but also one of caution," Dr. Mehler adds. "You can't take a complex neuropsychiatric disease that has escaped our understanding for 50 years and in one fell swoop have a therapy that is going to reverse it — that's folly. On the other hand, we now have clues to the neurobiology, the genetics, and the epigenetics of autism. To move forward, we need to invest more money in basic science to look at the genome and the epigenome in a more focused way."

The paper by Drs. Mehler and Purpura, "Autism, fever, epigenetics and the locus coeruleus," was published in the March issue of Brain Research Reviews.