March 12, 2009 — (BRONX, NY) — Bacterial resistance to antibiotics is one of medicine's most vexing challenges. In a study described in Nature Chemical Biology, researchers from Albert Einstein College of Medicine of Yeshiva University are developing a new generation of antibiotic compounds that do not provoke bacterial resistance. The compounds work against two notorious microbes: Vibrio cholerae, which causes cholera; and E. coli 0157:H7, the food contaminant that each year in the U.S. causes approximately 110,000 illnesses and 50 deaths. 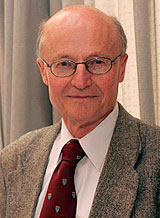 Vern Schramm, Ph.D.Most antibiotics initially work extremely well, killing more than 99.9% of microbes they target. But through mutation and the selection pressure exerted by the antibiotic, a few bacterial cells inevitably manage to survive, repopulate the bacterial community, and flourish as antibiotic-resistant strains.

Vern L. Schramm, Ph.D., professor and Ruth Merns Chair of Biochemistry at Einstein and senior author of the paper, hypothesized that antibiotics that could reduce the infective functions of bacteria, but not kill them, would minimize the risk that resistance would later develop.

Dr. Schramm's collaborators at Industrial Research Ltd. earlier reported transition state analogues of an enzyme that interferes with "quorum sensing" — the process by which bacteria communicate with each other by producing and detecting signaling molecules known as autoinducers. These autoinducers coordinate bacterial gene expression and regulate processes — including virulence — that benefit the microbial community. Previous studies had shown that bacterial strains defective in quorum sensing cause less-serious infections.

Rather than killing Vibrio cholerae and E. coli 0157:H7, the researchers aimed to disrupt their ability to communicate via quorum sensing. Their target: A bacterial enzyme, MTAN, that is directly involved in synthesizing the autoinducers crucial to quorum sensing. Their plan: Design a substrate to which MTAN would bind much more tightly than to its natural substrate — so tightly, in fact, that the substrate analog permanently "locks up" MTAN and inhibits it from fueling quorum sensing.

To design such a compound, the Schramm lab first formed a picture of an enzyme's transition state — the brief (one-tenth of one-trillionth of a second) period in which a substrate is converted to a different chemical at an enzyme's catalytic site. (Dr. Schramm has pioneered efforts to synthesize transition state analogs that lock up enzymes of interest. One of these compounds, Forodesine, blocks an enzyme that triggers T-cell malignancies and is currently in a phase IIb pivitol clinical study treating cutaneous T-cell leukemia.)

Biofilm formation in pathogenic Vibrio cholerae N16961 cell culture is
inhibited by MTAN inhibitor butylthio-DADMe-ImmucillinA
(BuT-DADMe-ImmA), biofilm (indicated by white arrows) is visibly
reduced in the presence of 1 micromolar inhibitor.In the Nature Chemical Biology study, Dr. Schramm and his colleagues tested three transition state analogs against the quorum sensing pathway. All three compounds were highly potent in disrupting quorum sensing in both V. cholerae and E. coli 0157:H7. To see whether the microbes would develop resistance, the researchers tested the analogs on 26 successive generations of both bacterial species.  The 26th generations were as sensitive to the antibiotics as the first.

"In our lab, we call these agents everlasting antibiotics," said Dr. Schramm. He notes that many other aggressive bacterial pathogens — S. pneumoniae, N. meningitides, Klebsiella pneumoniae, and Staphylococcus aureus — express MTAN and therefore would probably also be susceptible to these inhibitors.

While this study involves three compounds, Dr. Schramm says that his team has now developed more than 20 potent MTAN inhibitors, all of which are expected to be safe for human use: Since MTAN is a bacterial enzyme, blocking it will have no effect on human metabolism.

Other Einstein researchers involved in the study were Jemy Gutierrez, the lead author, Tamara Crowder, Agnes Rinaldo-Matthis, M. C. (Joseph) Ho and Steven C. Almo. The powerful inhibitors were reported in an earlier publication in collaboration with the Carbohydrate Chemistry Team of Industrial Research Ltd., in New Zealand.

The compounds in this paper have been licensed to Pico Pharmaceuticals, which plans to develop and initiate clinical trials of transition-state analogues. Dr. Schramm is a Pico Pharmaceuticals co-founder and chairman of its scientific advisory board.