The magazine's annual "Best of" awards recognize design and construction excellence in 20 different categories. Eligible projects are located in the tri-state area and substantially completed in the past year. An independent jury of industry experts judged a record 268 nominations and awarded projects based on such criteria as project management, client service, safety, design and functionality.

The top honor in the health care category was given to the five-story, 223,000-square-foot Price Center/Block Pavilion, Einstein's home for translational research. The new facility includes more than 40-fully equipped laboratories, a biosafety level 3 laboratory, common spaces to facilitate collaboration and a 107-seat auditorium.

The Price Center/Block Pavilion represents the largest medical research facility to be constructed in the Bronx since the College of Medicine opened in 1955. Designed by Payette Associates of Boston and built by Tishman Construction of New York, the facility was dedicated in June 2008. 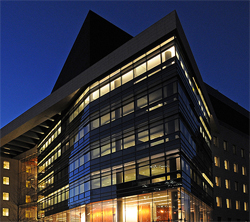 Research in the Price Center/Block Pavilion is at the frontier of biomedical science and has the potential to impact every area of medicine, from cardiovascular disease, cancer, and diabetes to genetic disorders and Alzheimer's disease. Researchers housed at the Price Center/Block Pavilion focus on genetic medicine and use their laboratory findings to develop medical advances that will benefit residents of the Bronx, New York City and, in the long term, the world.

The Price Center/Block Pavilion is named in honor of Michael F. Price and Muriel Block and her late husband Harold, who have made two of the largest gifts in the 53-year history of the medical school. Mr. Price, a pioneer in the mutual fund industry, made a donation of $25 million toward the creation of the Michael F. Price Center for Genetic and Translational Medicine at Einstein. The Price Center is housed in the new Harold and Muriel Block Research Pavilion. Mrs. Block's gift, valued at $22 million, is the second largest donation ever received by the medical school.

Winners of the Best of '08 awards were honored at an awards breakfast held this morning at the Marriot Marquis in Manhattan and are featured in the December issue of New York Construction. Winners in each category will be entered in the first-ever National Best of '08 competition and judged against winning entries from other regions. New York Construction is a McGraw-Hill publication.