August 10, 2008 —(BRONX, NY) — As people age, their cells become less efficient at getting rid of damaged protein — resulting in a buildup of toxic material that is especially pronounced in Alzheimer's, Parkinson's disease, and other neurodegenerative disorders. 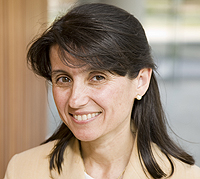 Now, for the first time, scientists at the Albert Einstein College of Medicine of Yeshiva University have prevented this age-related decline in an entire organ — the liver — and shown that, as a result, the livers of older animals functioned as well as they did when the animals were much younger. Published in the online edition of Nature Medicine, these findings suggest that therapies for boosting protein clearance might help stave off some of the declines in function that accompany old age. The study's senior author was Dr. Ana Maria Cuervo, associate professor in the departments of developmental & molecular biology, medicine and anatomy & structural biology at Einstein.

The cells of all organisms have several surveillance systems designed to find, digest and recycle damaged proteins. Many studies have documented that these processes become less efficient with age, allowing protein to gradually accumulate inside cells. But researchers continue debating whether this protein buildup actually contributes to the functional losses of aging or instead is merely associated with those losses. The Einstein study was aimed at resolving the controversy. 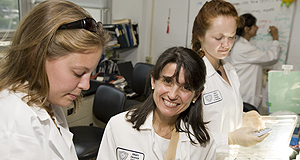 One of these surveillance systems — responsible for handling 30 percent or more of damaged cellular protein — uses molecules known as chaperones to seek out damaged proteins. After finding such a protein, the chaperone ferries it towards one of the cell's many lysosomes — membrane-bound sacs filled with enzymes. When the chaperone and its cargo "dock" on a receptor molecule on the lysosome's surface, the damaged protein is drawn into the lysosome and rapidly digested by its enzymes.

In previous work, Dr. Cuervo found that the chaperone surveillance system, in particular, becomes less efficient as cells become older, resulting in a buildup of undigested proteins within the cells. She also detected the primary cause for this age-related decline: a fall-off in the number of lysosomal receptors capable of binding chaperones and their damaged proteins. Could replenishing lost receptors in older animals maintain the efficiency of this protein-removal system throughout an animal's lifespan and, perhaps, maintain the function of the animal's cells and organs as well?

To find out, Dr. Cuervo created a transgenic mouse model equipped with an extra gene — one that codes for the receptor that normally declines in number with increasing age. Another genetic manipulation allowed Dr. Cuervo to turn on this extra gene only in the liver and at a time of her choosing, merely by removing the antibiotic doxycycline from the animals' diet.

To keep the level of the receptor constant throughout life, Dr. Cuervo waited until mice were six months old (the age that the chaperone system's efficiency begins to decline) before turning on the added receptor gene. When the mice were examined at 22 to 26 months of age (equivalent to approximately 80 years old in humans), the liver cells of transgenic mice digested and recycled protein far more efficiently than in their normal counterparts of the same age — and, in fact, just as efficiently as in normal six-month old mice.

Does maintaining efficient protein clearance in liver cells of an older animal translate into better functioning for the liver as a whole? Since a key function of the liver is metabolizing chemicals, Dr. Cuervo answered this question by injecting a muscle relaxant into very old transgenic mice and very old normal mice. The very old transgenic mice metabolized the muscle relaxant much more quickly than very old normal mice and at a rate comparable to young normal mice.

"Our study showed that functions can be maintained in older animals so long as damaged proteins continue to be efficiently removed — strongly supporting the idea that protein buildup in cells plays an important role in aging itself," says Dr. Cuervo. "Even more important, these results show that it's possible to correct this protein 'logjam' that occurs in our cells as we get older, thereby perhaps helping us to enjoy healthier lives well into old age."

Dr. Cuervo next plans to study animal models of Alzheimer's, Parkinson's and other neurodegenerative brain diseases to see whether maintaining efficient protein clearance in the brain might help in treating them. "Most people with these conditions are born with a mutation that gives rise to defective proteins, but they don't experience symptoms until later in life," says Dr. Cuervo. "We think that's because their protein-clearance systems can handle abnormal proteins when the person is younger but get overwhelmed as their efficiency falls with age. By preventing this decline in protein clearance, we may be able to keep these people free of symptoms for a longer time."

Cong Zhang, a graduate student working in Dr. Cuervo's laboratory, was the lead author of the Nature Medicine study. The research was supported by grants from the National Institute on Aging, an Ellison Medical Foundation Award and a Glenn Foundation Award.