BRONX, NY—(June 20, 2018)—It’s been known for years that humans and other mammals possess an antiviral gene called RSAD2 that prevents a remarkable range of viruses from multiplying. Now, researchers at Albert Einstein College of Medicine, part of Montefiore, have discovered the secret to the gene’s success: The enzyme it codes for generates a compound that stops viruses from replicating. The newly discovered compound, described in today’s online edition of Nature, offers a novel approach for attacking many disease-causing viruses. 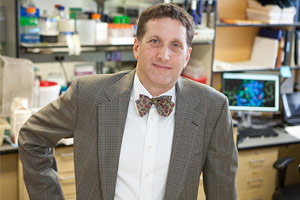 Steven C. Almo, Ph.D.“Nature has given us a template for creating a powerful and safe antiviral compound,” says study leader Steven C. Almo, Ph.D., professor and chair of biochemistry, professor of physiology & biophysics and the Wollowick Family Foundation Chair in Multiple Sclerosis and Immunology at Einstein. Dr. Almo and his colleagues at Einstein and Pennsylvania State University found that the compound, called ddhCTP, disrupts the replication machinery of Zika virus. The next step is to test the compound against a broad array of viruses.

Dr. Almo predicts that modifications to ddhCTP could make it even more potent. Furthermore, he says, “drugs based on this compound may have a favorable safety profile. We’ve been living with ddhCTP for many millions of years and long ago developed mechanisms to prevent it from interfering with the replication of our own cells.” Tyler Grove, Ph.D., a research assistant professor in Dr. Almo’s lab, and Anthony Gizzi, who received his Ph.D. from Einstein in May, are co-lead authors on the study.

Finding How Viruses Are Vanquished

Mammalian cells that become infected by viruses and other pathogens release signaling proteins called interferons. The interferons in turn trigger the expression of hundreds of genes—one of which is RSAD2, the gene that codes for the enzyme viperin (short for “virus inhibitory protein, endoplasmic reticulum-associated, interferon-inducible”). Studies have shown that viperin’s expression inhibits a broad spectrum of disease-causing viruses, including hepatitis C, rabies and HIV-1.

Researchers had proposed several theories for how viperin exerts its anti-viral effects, but precisely how it acted was a mystery. The current study reveals that viperin catalyzes the conversion of a nucleotide called CTP (cytidine triphosphate) into a structurally similar compound, or analog: the nucleotide ddhCTP—a previously undescribed molecule that sabotages viral replication.

“Nature has given us a template for creating a powerful and safe antiviral compound.”

Many viruses use CTP as a building block to synthesize the new strands of genetic material they need to replicate. The conversion of CTP to its analog, ddhCTP, throws a monkey wrench into virus’ ability to copy its genome. The analogue’s structure differs only slightly from CTP’s—but the difference is sufficient to bring viral replication to a halt.

Dr. Almo’s colleagues at Pennsylvania State University showed in laboratory studies that ddhCTP was highly effective at inhibiting the replication of three different strains of Zika virus—a mosquito-borne virus that causes an infection for which there is currently no treatment. “Based on our enzymology studies,” says Dr. Almo, “we think that ddhCTP may be able to inhibit all flaviviruses, a class of viruses that includes Zika as well as dengue, West Nile, yellow fever, Japanese encephalitis and hepatitis C.”

A Promising Platform for New Drugs

Dr. Almo says that ddhCTP appears to be “a completely novel drug scaffold” for designing antiviral drugs. “We are hoping we can generate variants of this molecule that will be even more effective,” he adds. “Those drugs would be based on a naturally occurring molecule, so they could have few off-target effects—a common problem with manmade nucleotide analogs, which can be effective but also quite toxic.” 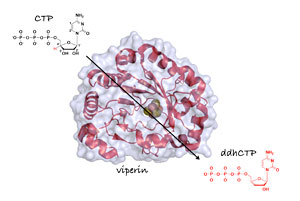 Drs. Gizzi, Grove, Arnold, Cameron, and Almo are co-inventors on a U.S. provisional patent application that incorporates discoveries described in this manuscript. The authors declare no other conflicts of interest.