January 24, 2018—(Bronx, NY)—A newly discovered family of viruses appears to play a major role in killing marine bacteria and maintaining the ocean's ecology. Preliminary evidence suggests that related bacterial viruses also occur in the human gut. The study, by researchers at Albert Einstein College of Medicine and Massachusetts Institute of Technology (MIT), was published online today in the journal Nature. 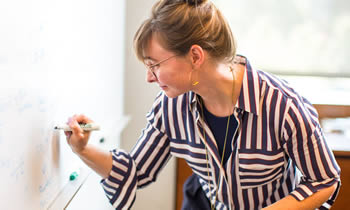 Libusha Kelly, Ph.D."Bacteria are key components at the bottom of the ocean's food chain, meaning that viruses—which can infect and kill bacteria—are also vital for understanding the ocean's health and function," says study co-leader Libusha Kelly, Ph.D., assistant professor of systems & computational biology and of microbiology & immunology at Einstein. She notes that viruses also kill bacteria in the human body. "By expanding what's known about the kinds of viruses that infect bacteria," she says, "this study allows us to look at other ecosystems like the human gut, to detect previously unknown viruses and to learn how they might be influencing bacterial populations that are vital for health or that contribute to disease."

The most abundant viruses in the oceans (and on the entire planet) are so-called double-stranded DNA (dsDNA) viruses. Of these viruses, the "tailed" variety (their tails are used to infect bacteria) have been extensively studied. "Non-tailed" dsDNA viruses appear to be quite common but are less well understood—mainly because they are difficult to culture and analyze. "Our collaborator Martin Polz at MIT developed a model system that overcomes these limitations," says Dr. Kelly, "making it possible to study the role of viruses in complex microbial communities in the lab."

“This study allows us to look at other ecosystems like the human gut, to detect previously unknown viruses and to learn how they might be influencing bacterial populations that are vital for health or that contribute to disease.”

In the new study, lead author Kathryn M. Kauffman, Ph.D., a postdoctoral associate in Dr. Polz's lab at MIT, collected daily samples for three months from waters off the Massachusetts coast. Viruses found in the samples were incubated for two weeks in cultures of Vibrionaceae bacteria (a common family of marine bacteria). More than 200 viruses that successfully infected and multiplied in the Vibrionaceae bacteria were randomly selected for genomic analysis.

Eighteen of the viruses were found to be members of a new family of small, non-tailed dsDNA viruses. The researchers named the new family Autolykiviridae, after Autolykos, a character in Greek mythology notorious for being difficult to catch.

The Kelly lab next asked whether these viruses preyed on bacteria besides the Vibrionacea. Her lab conducted computational analyses showing that viruses related to the Autolykiviridae infect many other types of marine bacteria, suggesting that these viruses are important predators, not only in the area in which they were isolated but potentially the entire ocean. "We showed that viruses related to the Autolykiviridae are infecting many diverse groups of ocean bacteria as well as other bacterial groups that we cannot currently identify," says Dr. Kelly.

The researchers found several reasons why previous ocean studies of viral diversity have almost entirely missed non-tailed dsDNA viruses such as the Autolykiviridae. A key reason: Viral genomes are often bound to proteins. To efficiently extract the DNA of viral genomes, researchers should use proteases (enzymes that break down proteins) but often don't do so.

Dr. Kelly believes that the presence of Autolykiviridae-like viruses is not limited to the oceans. "We've found related viral sequences in the gut microbiome," she says, "but we don't yet know how they influence microbial communities in the gut or how important they are for health."

"Investigating the diversity of non-tailed dsDNA bacterial viruses in other environmental systems is a major next step," says Dr. Kauffman. "We also need to uncover the molecular basis of the distinctive interactions of the Autolykiviridae with their hosts."

The study is titled, "A major lineage of non-tailed dsDNA viruses as unrecognized killers of marine bacteria." The other Einstein authors are: Julia M. Brown, Ph.D., and William K. Chang, Ph.D. Additional authors include: Fatima A. Hussain, Joy Yang, Philip Arevalo, David VanInsberghe, Joseph Elsherbini, and Michael B. Cutler, all of MIT; and Radhey S. Sharma, Ph.D., of the University of Delhi, who was a visiting researcher at MIT.

This work was supported by grants from the National Science Foundation and the WHOI Ocean Ventures Fund.