November 13, 2017—BRONX, NY—The number of older adults with Alzheimer’s disease continues to rise, but the number of treatments for the condition has not kept pace. Now, researchers at Albert Einstein College of Medicine, part of Montefiore, have received a $6.3 million grant from the National Institutes of Health (NIH) to identify networks of genes in healthy centenarians that protect them against dementia. The results could help identify new targets for drugs to treat Alzheimer’s. 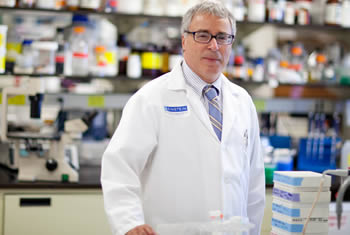 Nir Barzilai, M.D.According to the Centers for Disease Control and Prevention, approximately 5.4 million people in the United States live with Alzheimer’s, the most common type of dementia. It is currently the sixth leading cause of death among all adults. It is estimated that by 2050, nearly 14 million people aged 65 or older will live with the disease—nearly half of them over the age of 85.

“Aging is the number one risk factor for Alzheimer’s,” says Nir Barzilai, M.D., co-principal investigator on the grant, director of the Institute for Aging Research, and the Ingeborg and Ira Leon Rennert Chair in Aging Research. “But there are individuals with extraordinary longevity—95 years or older—who have a natural resistance to dementia. We hope to unlock the secrets in their genomes to reveal promising targets for drug development.”

Zhengdong Zhang, Ph.D.Dr. Barzilai and Zhengdong Zhang, Ph.D., co-PI on the grant and associate professor of genetics at Einstein, will tap into the wealth of genomic data generated from two existing longitudinal studies on aging—the Longevity Genes Project, a group of over 600 centenarians, who at age 95 have no signs of dementia; and LonGenity, a study of the children of centenarians, and age-matched controls without parental history of longevity. These two groups were followed prospectively and include neurocognitive assessments for cognitive decline and Alzheimer’s.

For more than a decade, Dr. Barzilai has led the Longevity Genes Project, which studies the genetically homogenous population of Ashkenazi Jews. Previous studies have identified genes that appear to help preserve cognitive function. Building on past successes, the research team will expand their approach to investigate networks of genes that provide protection against genes that would otherwise cause disability and disease.

“Aging is the number one risk factor for Alzheimer’s. But there are individuals with extraordinary longevity—95 years or older—who have a natural resistance to dementia. We hope to unlock the secrets in their genomes to reveal promising targets for drug development.”

The top candidates will be validated in other external human aging studies and in neuron models. They can then be targeted for new drug development.

“Using advanced genetic analysis, we can move past picking out individual genes,” explains Dr. Zhang. “We can see which genes are preserved together, but also how they can act on genetic variants we know can cause disease. We are hopeful we can discover new targets for future drug design.”

The grant, titled “Resilience to Alzheimer’s Disease in Humans with Exceptional Longevity,” is from the National Institute for Aging, part of the NIH (1R01AG057909).