July 12 , 2017—NEW YORK—Researchers at Montefiore Health System and Albert Einstein College of Medicine were awarded a $3.4 million grant from the National Institutes of Health to implement a smoking cessation study for people with opioid use disorder (OUD). The study will examine a novel approach: incorporating a medication that reduces tobacco cravings into an opioid rehabilitation program. Conducted at Montefiore-affiliated clinics in the Bronx, the project will provide smoking cessation support to a diverse population that often lacks resources to quit tobacco and is disproportionately affected by tobacco-related diseases. 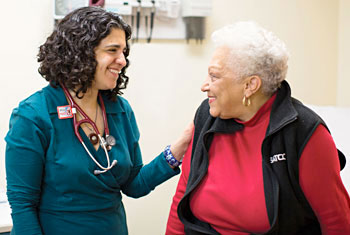 Shadi Nahvi, M.D., M.S.“As the opioid epidemic skyrockets, smoking has become the leading cause of death for people struggling with substance use,” says Shadi Nahvi, M.D., M.S., attending physician at Montefiore and associate professor of medicine and of psychiatry and behavioral sciences at Einstein. “By simultaneously treating opioid and tobacco addiction, we can help people who are often left out of smoking cessation programs achieve their goals of leading healthier lives.”

In earlier research, Dr. Nahvi and her team found that 10 percent of opioid-dependent smokers who were given varenicline (Chantix), a prescription drug that decreases cravings and the pleasurable effects of tobacco products, were able to quit smoking.  They also determined that the success rate doubled when patients were offered adherence support. Using “directly observed therapy,” the medication was dispensed and taken in-person by opioid treatment program nurses. These results inspired Dr. Nahvi’s team to launch this program to further optimize smoking cessation success rates for patients receiving opioid treatment.

Dr. Nahvi and her team will recruit 450 patients who smoke from Montefiore’s Division of Substance Abuse (DoSA) to:

“By simultaneously treating opioid and tobacco addiction, we can help people who are often left out of smoking cessation programs achieve their goals of leading healthier lives.”

In a 2006 survey, Montefiore researchers found that 83 percent of patients in its substance abuse clinics were current smokers—five times the rate found in the overall New York City population. Nearly half of the smokers in the Montefiore survey were thinking about quitting in the next six months, and an additional 22 percent were immediately ready to quit.

Dr. Nahvi will have collaborators on the study: Einstein investigators Julia Arnsten, M.D., M.P.H (Co-I), professor of medicine (general internal medicine); of epidemiology & population health; and of psychiatry and behavioral sciences; chief, Division of General Internal Medicine; and Director, Center for Comparative Effectiveness Research; and Moonseong Heo, Ph.D., (Statistician), professor of epidemiology & population health; as well as researchers from Fordham University, the University of Kansas, the University of Toronto, and the University of California, San Francisco.