December 1, 2016—(BRONX, NY)—The National Institutes of Health has awarded researchers at Albert Einstein College of Medicine and Pennsylvania State University a five-year, $12.2 million grant to continue studies on the aging brain, Alzheimer’s disease and other dementias. More than five million Americans are living with Alzheimer’s disease—a number that is expected to double by 2040 as baby boomers age.

Richard B. Lipton, M.D.Scientists at the Einstein Aging Study will conduct the research in collaboration with experts at Pennsylvania State University. Their studies will enroll seniors who will be equipped with smartphones on which they’ll answer questions testing their thinking ability—an effort to measure the cognitive changes that precede the onset of dementia.

“We will also look at those risk factors for cognitive decline that can be corrected, including stress, pain, vascular disease and poor sleep,” says Richard B. Lipton, M.D., co-principal investigator on the grant and the Edwin S. Lowe Chair in Neurology at Einstein, professor and vice chair of neurology at Einstein and Montefiore. “By linking specific risk factors to cognitive decline in the study participants, we hope to develop personalized interventions that will prevent the onset of Alzheimer’s dementia.”

“Alzheimer’s disease is usually diagnosed after many years of cognitive decline,” says Martin J. Sliwinski, Ph.D., professor of human development and family studies at Penn State University, director of the Penn State Center for Healthy Aging and co-principal investigator on the grant. “The subtle changes in the brain and in cognition during pre-Alzheimer’s are not well understood and can be difficult to track using typical one-time, in-person cognitive evaluations – ‘snapshots’ that can yield misleading results.”

Martin J. Sliwinski, Ph.D.The researchers say accurate data from their study will provide insight into the natural progression of the disease, shed light on the variability between individuals and help evaluate treatment effectiveness.

The Einstein Aging Study will recruit 500 community dwelling participants over age 70 in the Bronx. The seniors will receive customized smartphones, which—over a 14-day period—will ask them multiple times a day to record their personal assessments on a range of measures and also play several short matching and memory games.  These “measurement bursts” will allow the researchers to average multiple measurements so they can more accurately assess an individual’s sense of well-being and cognitive status and track changes over time.

Participants will also wear fitness trackers to measure sleep patterns and activity, along with monitors to measure heart rate. Some will undergo magnetic resonance imaging (MRI) of their brains, allowing researchers to assess the hippocampus, the part of the brain associated with memory, and other cranial regions. 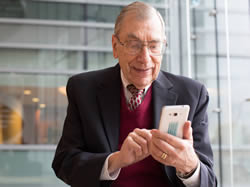 Dr. Lipton has led the Einstein Aging Study since 1992, focusing on the aging brain, normal aging, mild cognitive impairment, Alzheimer’s disease and other dementing disorders. The study, supported since 1980 by grants from the National Institute on Aging, involves an interdisciplinary team of neurologists, neuropsychologists, neuropathologists, neurochemists, social workers and other health care professionals. Over the course of three decades, the study has supported pioneering research in cognitive aging, increased our understanding of preclinical states of dementia and served as a national and international resource for Alzheimer’s disease research. The new NIH funding will allow investigators to expand their research scope by using this mobile phone-based approach and collaborating with experts at Penn State.

The grant is titled “Einstein Aging Study” (2P01AG003949-32). Additional researchers on the study include Mindy Katz, M.P.H., senior associate in the Saul R. Korey Department of Neurology, and Carol Derby, Ph.D., associate professor in the departments of neurology and epidemiology and population heath at Einstein, and Joshua Smyth, Ph.D., professor of biobehavioral health and medicine at Penn State, and Jacqueline Mogle, M.S., Ph.D., assistant professor in the College of Nursing at Penn State.