Einstein Awarded $148 Million for Research from NIH in 2015

December 1, 2015—(BRONX, NY)—Investigators at Albert Einstein College of Medicine received $148 million in research funding from the National Institutes of Health during the federal fiscal year of 2015. Below are some highlights of those received between July 1 and September 30.

Looking Through the Doors of Visual Perception 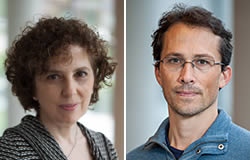 Elyse Sussman, Ph.D. (left), Adam Kohn, Ph.D.Elyse Sussman, Ph.D., and Adam Kohn, Ph.D., have been awarded a three-year, $1.7 million grant to study how visual adaptation contributes to visual perception. Visual adaptation is a widespread process in which recent visual inputs dramatically influence brain activity and perception. However, adaptation’s function in vision is poorly understood. Based on preliminary data, the researchers hypothesize that adaptation may be a form of predictive coding that “educates” perception by taking special notice of new or unexpected events while discounting expected ones. They will test this hypothesis by conducting research involving human electroencephalography (monitoring and recording electrical activity in the brain), monkey neurophysiology and computer modeling. These studies may reveal how the visual circuits of the brain influence perception—knowledge needed for treating people with visual-processing deficits and for developing prosthetic devices for aiding vision. Dr. Sussman is professor in the Dominick P. Purpura Department of Neuroscience and of otorhinolaryngology – head and neck surgery. Dr. Kohn is associate professor in the Dominick P. Purpura Department of Neuroscience and of ophthalmology & visual sciences.

Steven C. Almo, Ph.D.For any organism, the network of molecular interactions that occur intracellularly, intercellularly and between its cells and their external environment is known as its interactome. Very little is known about interactions involving the one-third of proteins that human cells secrete or that are present on their surfaces (e.g., cell-surface receptors). These proteins detect environmental and other cues critical to both normal physiology and disease including autoimmune disease, infectious diseases and cancer. Steven Almo, Ph.D., has been awarded a three-year, $1.9 million grant to map the “Ecto-Interactome” —the entire set of interactions involving secreted and cell-surface proteins—using two high-throughput platforms now being optimized. This mapping effort could both increase our understanding of basic biology and lead to novel strategies for treating a wide range of human diseases. Dr. Almo is professor and chair of biochemistry, professor of physiology & biophysics, the Wollowick Family Foundation Chair and Immunology and director of the Einstein Macromolecular Therapeutics Developmental Facility.

Zev Williams, M.D., Ph.D.The placenta’s health is crucial to the health of both fetus and mother. Abnormalities in placental structure or function cause pregnancy complications including preterm birth, miscarriage, stillbirth and preeclampsia. Zev Williams, M.D., Ph.D., has received a five-year, $3.8 million grant to develop methods for noninvasively monitoring placental function so that problems can be detected early and treated. The research is premised on the fact that changes in the expression of coding and non-coding genes reflect the functional state of an organ; and those changes in gene expression can be detected by assessing that organ’s transcriptome:  the identity and concentration of all its RNA molecules—mRNA  as well as noncoding types including tRNA, rRNA and microRNA. Dr. Williams’s laboratory, in collaboration with Thomas Tuschl, Ph.D., at Rockefeller University and the Howard Hughes Medical Institute, has developed an RNA sequencing method for profiling placental microRNAs found in the mother’s blood. His project will advance this technology to permit non-invasive monitoring of the placental transcriptome using both maternal blood and urine. Ideally, this work will result in a noninvasive tool for gaining insights into the processes underlying pregnancy-related diseases and indicate when therapeutic interventions are needed. Dr. Williams is assistant professor of obstetrics & gynecology and women’s health and of genetics and director of the Program for Early and Recurrent Pregnancy Loss (PEARL) at Einstein and Montefiore.

Eric Bouhassira, Ph.D.People with sickle cell disease and other chronic anemia conditions typically receive transfusion therapy over many years. But for patients of Asian and African backgrounds, finding compatible donors can be difficult: The high degree of genetic diversity in their blood group antigens means they tend to have rare blood groups; yet most blood donors are whites and of European ancestry whose blood group antigens are much less diverse. Over time, the difficulty in finding well-matched donors for these patients causes a high incidence of alloimmunization (unwanted immune response following transfusion of genetically different blood cells). Eric Bouhassira, Ph.D., has received a four-year, $2 million grant to develop methods for the laboratory production of red blood cells that people with rare blood groups can use safely. One part of the project involves a panel of six donors with rare blood types. From skin cells of these individuals, Dr. Bouhassira and his colleagues at the New York Blood Center will generate induced pluripotent stem cells that will be made to differentiate into hematopoietic stem cells and then into red cells that lack the antigens responsible for causing immune reactions. The goal is to produce “universally safe” red cells in sufficient quantity for use in the production of reagent red blood cells and eventually for life-saving transfusion therapy. The first people to receive such cells would be patients with sickle cell disease who have no other treatment options. Dr. Bouhassira is professor of cell biology and of medicine and Ingeborg and Ira Rennert Professor of Stem Cell Biology and Regenerative Medicine.

Opioid Use among People Living with HIV

Joanna Starrels, M.D., M.S.The dramatic increase in misuse, addiction and overdose of prescription opioid (PO) analgesics stems largely from providers prescribing POs for chronic pain. That puts people living with HIV at particular risk, since they suffer disproportionately from chronic pain and from substance use and mental health disorders that increase their risk for PO misuse. Joanna Starrels, M.D., M.S., has been awarded a four-year, $2.3 million grant to study how PO use influences the health outcomes of people living with HIV and chronic pain, 250 of whom will be followed over a 12-month period. The main goals of her research are to gather evidence that can help guide the clinical management of patients living with HIV and chronic pain and to improve the health of these patients. Dr. Starrels is associate professor of medicine at Einstein and attending physician, internal medicine at Montefiore.

Sophie Molholm, Ph.D.Up to 90 percent of kids with autism spectrum disorders (ASD) have “sensitivity issues”—too sensitive or not sensitive enough to their environment or not able to integrate sensory information in an orderly way. Such problems impair ASD children’s educational efforts and social opportunities as well as their long-term outcomes. Sophie Molholm, Ph.D., and her research partners have been awarded a five-year $3.18 million NIH grant to better understand the brain processes responsible for these sensitivity issues and to test the effectiveness of Sensory Integration Treatment (SIT), a non-invasive intervention for treating sensory symptoms in ASD. The testing will involve 180 children aged 6-8.5 who have ASD and sensory issues. They will be randomized to receive either 10 weeks of SIT, 10 weeks sessions of a commonly used behavioral intervention (Discrete Trial Training) or no treatment. Outcome assessment will involve behavioral and electrophysiological measures taken at baseline, immediately after treatment and 12 weeks following treatment. The team will evaluate SIT’s impact on functional skills and autism severity and look for possible neurological mechanisms by which this intervention may work. Dr. Molholm is associate professor of pediatrics and of neuroscience, the Muriel and Harold Block Faculty Scholar in Mental Illness and associate director of the Rose F. Kennedy Intellectual and Developmental Disabilities Research Center. 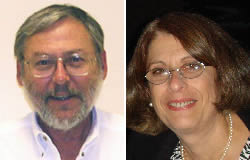 David Spray, Ph.D. (left), Eliana Scemes, Ph.D.Astrocytes (literally ‘star-like cells’) are the most numerous glial (non-neuronal) cells in the central nervous system (CNS). Once considered relatively inert, astrocytes are now recognized as performing a wide range of essential functions in the healthy CNS. A key function involves astrocyte projections called endfeet, which interact with endothelial cells lining cerebral microvessels to form the blood-brain barrier. David Spray, Ph.D., and Eliana Scemes, Ph.D. have received a joint five-year, $2.6 million NIH grant to study how astrocyte gap junctions—the specialized protein channels connecting the cytoplasm of adjacent astrocytes--regulate the organization of astrocyte endfeet and thereby contribute to blood-brain-barrier integrity. In particular, Dr. Spray and Dr. Scemes’ research will focus on the role of connexins--the proteins that make up gap junctions—in preserving astrocyte polarity. This work, done in collaboration with Erik Lee Snapp, Ph.D., may lead to new therapies against multiple sclerosis, stroke and other disorders that occur when loss of astrocyte polarity disrupts the blood-brain barrier.  Drs. Spray is professor in the Dominick P. Purpura Department of Neuroscience and of medicine. Dr. Scemes is professor in the Dominick P. Purpura Department of Neuroscience.

Nicholas Sibinga, M.D.Over the past several decades, patients suffering from end-stage organ failure have greatly benefited from donated kidneys, hearts and other organs. Unfortunately, graft vascular disease (GVD) limits the long-term effectiveness of almost all donated organs—even when immunosuppressant drugs are used. In GVD, lesions consisting of smooth muscle cells and extracellular matrix develop within the intima (innermost layer) of vessels of the donated organ. No therapies have yet proven effective in preventing or reversing GVD. As they accumulate, GVD lesions restrict blood flow and lead to organ failure. Nicholas Sibinga, M.D., has been awarded a four-year, $2.1 million grant to study the role that a cellular growth factor called Colony Stimulating Factor-1 (CSF-1) plays in GVD. In previous studies involving mice, Dr. Sibinga, in collaboration with Richard Stanley, Ph.D., has shown that the absence of CSF-1 either in tissue recipients or in donor tissue significantly limits the size of GVD lesions. Now he will investigate whether inhibiting CSF-1 could be a treatment strategy for minimizing GVD and prolonging the function of transplanted organs. Dr. Sibinga is associate professor of medicine and of developmental & molecular biology.