Before entering Einstein, first-year medical student Jessica Faiz taught geometry at a high school in the South Bronx. She noticed something was missing at the school. 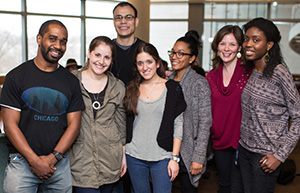 Members of the EiSci team (from left): Dayle Hodge, Gila Hoffman, Jorge Aguilar, Carly Hirschberg, Sabriya Stukes, Dina Tsukrov and Leah Guthrie"The biggest problem I saw was that the students didn't really know about the opportunities available to them, especially in math and science. I had a few students who wanted to be doctors or to go into healthcare, but they had no idea about the path to get there," Ms. Faiz said.

Now, she's trying to change that. Last September, Ms. Faiz and eight fellow students, who also have backgrounds in teaching or reaching out to youth, formed EiSci with the mission of exposing high school students in the Bronx to careers in science or medicine. The club, which is part of Einstein's Community Action Network and supported by the Community Based Service Learning Program, consists of 21 Einstein medical and graduate students who visit Pelham Lab High School in the East Bronx two Friday afternoons a month. The visits alternate between EiSci's two central components—workshops designed to give the high schoolers hands-on experience learning about science and one-on-one mentoring sessions. 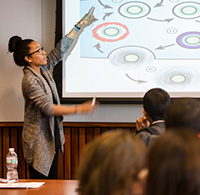 "I think we've excited them about science," said Gila Hoffman, a first-year medical student who is among the EiSci leadership.

One popular workshop allowed the Pelham Lab students to compare the human brain to animal brains. Milena Pajovic, a ninth-grader who wants to be forensic pathologist, said "I loved everything about the program, but the brain workshop changed my life."

She explained, "I held a brain. I held a human brain. It was the happiest moment of my entire life."

Learning from Each Other

Perhaps the most rewarding part of EiSci is the relationships that volunteers and students form during one-on-one mentoring sessions."We've enjoyed getting to know each other and learning from each other," said Ms. Hoffman. "It's been such a rewarding experience." 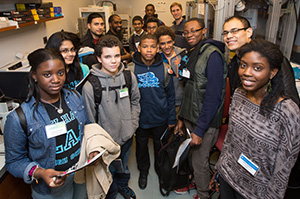 Pelham Lab students with their mentorsCarly Hirschberg, a first-year medical student and co-leader of EiSci, agreed, noting, "The students think of us as peers rather than teachers.We talk about everything from how to manage their daily lives and how to make the best use of their time to where they want to go after high school."

From answering questions about scholarships and student loans to introducing various career paths in healthcare or scientific research, the EiSci volunteers expose the high schoolers to a life they might not have thought possible.

"We always say we go to med school around the corner and they don't really believe us," said Ms. Hirschberg.

That changed on March 12 when the students took a field trip to Einstein for the first time. Daniel Layer, Pelham Lab's science teacher observed, "Many of my students don't know anyone outside of their teachers who have gone to college, so the visit was a great way for them to see what medical school is like in person. Until now, it's only been people saying, 'Oh you should go to college,' but they didn't really know what that meant."

During the field trip, Mr. Layer and his students toured Einstein and took part in mini-lessons offered by staff at the medical school's MicroPET, Analytical Imaging and Protein Production facilities. The students will return to Einstein in May to show off the diverse science projects they've been working on with their EiSci mentors. Each student will present their research to their entire student body at the inaugural EiSci Medicine and Research Pre-Professional Conference.

The club's leaders hope EiSci can expand to more schools in the Bronx next year, so they can reach more students.

"It's important because a lot of high school students don't know their career options after high school," said Ms. Hirschberg. "We hope to demonstrate some of the ways you can continue your education to become whatever you want to be."