From professional articles to academic assignments to patient records, medicine is often awash in a sea of words. Why, then, would a physician or a scientist want to churn out more of them – especially in a "blogosphere" that's already crowded with an estimated more than 180 million web logs? 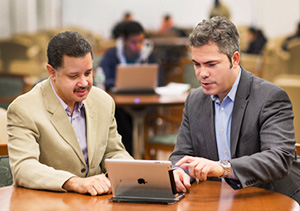 Blog co-editors (from left) David Flores and Paul Moniz"Writing for Einstein's blog, The Doctor's Tablet, definitely complements the work I do, by allowing me to take a step outside of it," said Dr. Lisa Shulman, a featured contributor who is associate professor of clinical pediatrics and director of infant and toddler services at the College of Medicine's Children's Evaluation and Rehabilitation Center. "For me, this writing is really about 'meta-medicine.'"

The Doctor's Tablet recently celebrated its second birthday; it is intended to capture personal opinions, observations, and experiences throughout medicine. They include those of physicians, researchers, educators, medical students and healthcare professionals, according to Paul Moniz, managing director of communications and marketing, who co-edits the blog with social media manager David Flores.

"The Doctor's Tablet looks at doctoring from a variety of vantage points," said Mr. Moniz. "Even though we're on eight other social or multimedia platforms, the blog is unique because it allows our authors the space and format to present nuanced viewpoints and to share their thoughts with a broad audience that includes doctors, nurses, medical students and people interested in healthcare." 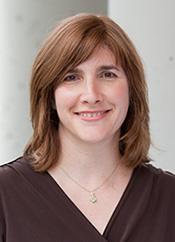 Lisa Shulman, M.D. is among The Doctor’s Tablets featured contributorsSince its launch in January 2012, 87 blog authors have written more than 200 posts for The Doctor's Tablet, attracting a 90 percent increase in blog visitors this year over last. The content has been republished on influential digital media sites including The Huffington Post, the popular medical website KevinMD.com and Wing of Zock, a blog affiliated with the Association of American Medical Colleges.

The content is as varied as the writers, focusing on a host of medical specialties, medical education, research, bioethics, and other topics.

Dr. Shulman often finds her topics in the personal experiences of helping children with developmental disabilities. One of her most popular posts, "Goldilocks and the Three Moms of Children with Autism," reflected on the role of family choices – and her own role – in educational planning for three 5-year-old boys with similar diagnoses of autism.

"Even when parents have enough information to make informed choices, we still end up with a variety of viewpoints: A class size that's too big for one family may be too small for another," Dr. Shulman wrote in her post. It's that type of musing that she enjoys most.

"These introspective pieces strike a chord with me because they allow me to really think about my practice of medicine, to put it into perspective," she said, recalling her post. "I think I derive strength, personally even more than professionally, from the experience of writing them. I hope they are helpful for others as well." 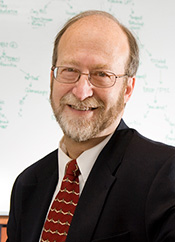 Paul Marantz, M.D. also is a featured contributor for the blogThe freedom to focus on topics that are personal or that extend beyond the Einstein campus is an important one, Mr. Flores believes. He and Mr. Moniz provide editorial guidance, but the words of the blog are those of the contributors, he explained.

"I think that's one of the things that make The Doctor's Tablet authentic, and why the content is shared so much," he said. "We're not just looking at Einstein, we're looking at what's going on in medical education, research and healthcare in the rest of the country and the world."

Another of the blog's six featured contributors is Dr. Paul Marantz, associate dean for clinical research education and director of the Center for Public Health Sciences, who often offers a more "worldly" perspective in his offerings. An epidemiologist, he has blogged about the frequent conflict between popular sentiment and evidence-based reasoning regarding public health issues.

"Each time I use the tongs, I am increasing the risk of transmitting an infectious agent, both to myself and to every other customer using those tongs. As a medical and public health professional, I was immediately embarrassed that I had not previously considered this, and I resolved to mend my ways," Dr. Marantz wrote.

But he also noted the "harsh and disapproving looks" of other customers when he selected a deli item for purchase and picked it up by hand. "So, even though I knew the hand-selection approach was safer, I briefly succumbed to the majority-rule principle, he wrote. "... In such cases, we ought to seek not 'consensus,' but evidence-based conclusions."

The purchase of a roll in a New York deli may seem an unlikely inspiration for a 628-word online essay. But Dr. Marantz believes worthwhile topics abound if one is mindful of considering them. He finds the experience of writing about those topics valuable.

"This is my first and only blog, and I didn't have a lot of expectations," he said. "But the experience has been really satisfying. The Doctor's Tablet gives you an outlet, a voice you may not have in other ways. You see something that the public misunderstands and you want to say something, to elucidate them. And maybe you can have an impact."