You've heard the expression, "the cure is worse than the disease." Well, antibiotics became the cure that made the disease worse.

Liise-anne Pirofski, M.D.,
chief of infectious diseasesAccording to the Centers for Disease Control and Prevention (CDC), antibiotic-resistant "superbugs" infect some two million people each year, killing 23,000 of them—and the list of microbes able to withstand every antibiotic in the armamentarium is growing at an alarming pace. While diligent hand-washing and other infection control procedures in medical facilities have proved helpful, infectious disease experts blame the proliferation of multidrug-resistant organisms (MDROs) on excessive or inappropriate use of antibiotics.

With no new superbug-slaying antibiotic agent on the horizon, these experts agree that Antibiotic Stewardship Programs (ASPs) that promote judicious and effective antibiotic use—and educate clinicians about best practices—are vital to slow the onslaught of MDROs.

In 2006, Dr. Liise-anne Pirofski, recognized the need and the opportunity for an ASP as she assumed her role as chief of the division of infectious diseases at Einstein and its University Hospital, Montefiore Medical Center. She led the effort to initiate an ASP at Montefiore, designed to educate providers and promote prudent antibiotic use.

The Einstein-Montefiore ASP launched in July 2008 at Montefiore's Moses and Weiler campuses, and expanded during 2013 to Wakefield and the Children's Hospital at Montefiore. Dr. Pirofski recruited infectious disease specialist Dr. Belinda Ostrowsky, associate professor of clinical medicine at Einstein, to lead the stewardship program. While, thus far, ASP activities have predominately affected the inpatient wards and emergency rooms, Dr. Ostrowsky hopes to expand the program to the ambulatory setting.

"Our stewardship program is unique because it was founded within the infectious diseases division, with academic and clinical goals, and the whole division is invested in it," explained Dr. Pirofski. 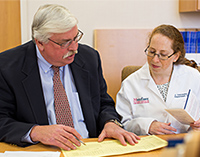 "Our stewardship program is educational, not punitive," noted Dr. Ostrowsky. "Rather than telling people how to prescribe, we provide data that helps them to make informed choices."

The program, now in its fifth year, restricts certain drugs as agents of last resort. In doing so, it has achieved notable impact: "Between 2009 and 2011, we spent roughly $1 million less on antibiotics," said Dr. Ostrowsky.

The stewardship program also aims to change prescribing habits. While the CDC estimates that half of antibiotic prescriptions are unnecessary or inappropriate, through collaboration and an education-focused clinical approach, the Einstein-Montefiore ASP has been able to better educate an estimated 1,000 Montefiore physicians on the proper selection, dosage and duration of antibiotic treatment. "We want our physicians to consider certain factors when they get out their prescription pads," said Dr. Ostrowsky. "For example, is the medicine they're choosing treating a bacteria or a virus? Are they selecting a broad-spectrum antibiotic when a narrow-spectrum agent could be equally effective? Is the dosage and length of treatment appropriate? These questions can guide them in determining the best treatment option."

"The success of ASPs is crucial in New York City, which has long been the epicenter of multi-drug-resistant and hospital-acquired infections," said Dr. Currie. MDROs are a particular problem because the city's six dozen acute-care hospitals routinely transfer patients between facilities, and some of these patients may harbor an infectious organism without any signs or symptoms.

Take, for instance, antibiotic resistant C. difficile colitis—a potentially fatal hospital-acquired infection that the CDC regards as an "urgent threat." This infection is almost alwayspreceded by prescription of antibiotics, which vary in their ability to cause the infection," noted Dr. Currie.

Drs. Currie and Ostrowsky were the lead investigators for the Montefiore-based ERASE C. difficile (Evaluation and Research on Antimicrobial Stewardship's Effect on C. difficile) study that involved 10 hospitals in the New York metropolitan area, 3 of which are associated with Einstein-Montefiore.Funded by the Agency for Healthcare Research and Quality (AHRQ) and the CDC, the ERASE studywas designed to determine which antibiotics were responsible for the majority of reported C.difficile cases and to devise targeted interventions in order to reduce infections.

Three antibiotics were found to be implicated in the largest number of cases: the penicillin Zosyn (a combination of piperacillin and tazobactam); the quinolones (e.g., ciprofloxacin and levofloxacin); and higher generation cephalosporins. The study laid the groundwork for development of a tool kit for the AHRQ that gives hospitals a blueprint for developing ASPs to design interventions that directly target C. difficile and measure the effectiveness of each one.

Since the advent of the antibiotic era, doctors focused on "killing the bug," said Dr. Pirofski, adding, "Overuse of broadly active drugs created MDROs and increased incidence of fungal infections." She believes that stewardship will promote the idea of treating infectious disease by boosting immune response—which represents a growing area of infectious disease research at Einstein.

According to Dr. Pirofski, the ASP structure could also lead to increased research dollars. "With the rollout of widespread healthcare reform, there's increasing attention on quality outcomes on the federal and state levels," she said.

"We're setting the example for others to follow," added Dr. Ostrowsky. She advises hospitals wanting to implement an ASP to "start small, if you don't have a lot of resources, and prioritize to get the low-hanging fruit and build momentum for your program."