Charting His Next Chapter

For some physicians, medicine is more than a career; it is a calling. Case in point: Robert W. Marion, M.D., Einstein Class of 1979.

Dr. Marion has dedicated his professional life to diagnosing and treating young children with rare genetic disorders or serious developmental disabilities such as autism, spina bifida and Down syndrome; helping his patients and their families cope with the physical, social and emotional challenges they face; counseling couples whose genetic inheritance predisposes them to producing offspring with these severe conditions; and grieving with the parents of children for whom the prognosis is grim. 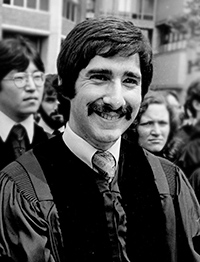 Robert W. Marion, M.D., Einstein Class of 1979A well-known figure on the Einstein campus, Dr. Marion has worn multiple hats as clinician, researcher, educator and administrator—including his role for the past seven years as director of Einstein's Children's Evaluation and Rehabilitation Center (CERC). During his nearly 38 years at Einstein, Dr. Marion has been deeply committed to, and admired by, his patients, students and colleagues, both at the College of Medicine and its affiliated teaching hospitals. So it may come as a surprise to many in the Einstein community to hear that he recently stepped down from his post as director of CERC.

But to those closest to him, Dr. Marion's decision to step back from the position that represented the culmination of his life's work makes perfect sense. They know it was a thoughtful response to a two-part wake-up call that Dr. Marion received in early December 2012. The pair of life-altering events—one joyously expected, the other an unwelcome shock—came in close succession. On December 5, his first grandchild, Sadie, was born. Three days later, he suffered a heart attack.

For the vigorous 61-year-old with no family history of heart disease, it was a cataclysm that sparked a serious bout of deep contemplation and soul searching. "All things considered, I was extremely fortunate. Because I received outstanding care almost immediately, I survived."

But that night, after his angioplasty was completed and he lay in bed in the ICU, he realized that if he wanted to see his granddaughter grow up, he needed to make major changes in his life. "It was clear that one of those changes had to be finding a way to decrease stress," he said.  So working closely with Dr. Allen M. Spiegel, the Marilyn and Stanley M. Katz Dean at Einstein, a mutual decision was reached to pass the mantle of administrative leadership at CERC to a successor.

A Pioneer of Pediatric Genetics 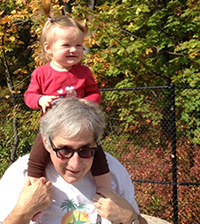 Dr. Marion at the Rochester Zoo with his granddaughter, Sadie.Board certified in both pediatrics and medical genetics, Dr. Marion bears the proud title of "Einstein lifer," having spent all but one year of his nearly four decades practicing medicine at the College of Medicine. After earning his M.D. degree in 1979, he did his pediatrics internship at the Boston Floating Hospital, Tufts-New England Medical Center. He then returned to Einstein-affiliated hospitals for a residency in pediatrics, a fellowship in medical genetics and training in genetic counseling.

It was a mandatory community medicine project with the genetic counseling program during his first year of medical school that got him hooked on clinical genetics. At the time, just prior to the technological revolution that led to the human genome project, Bob Marion had no inkling that his chosen path was destined to become the new cutting edge of medicine.

Dr. Marion joined the Einstein faculty in 1984.  In 2004, he drew the world's attention, when he served as pediatrician to the Aguirre twins, Clarence and Carl, who were co-joined at birth and separated as toddlers in a series of successful, landmark operations at the Children's Hospital at Montefiore.   Two years later, following a series of promotions, he was named director of the Rose F. Kennedy University Center for Excellence in Developmental Disabilities (UCEDD) and of CERC, the renowned clinical arm of the UCEDD. A year later, he was invested as Einstein's second Ruth L. Gottesman Chair in Developmental Pediatrics.

Over the years, Dr. Marion has taken on the toughest cases, identifying rare genetic anomalies and treatments that have given his young patients the best possible opportunity for enjoying productive, fulfilling lives—giving them and their parents a realistic sense of hope.

One notable example is Alena. Born in Siberia and adopted just a few months before her 4th birthday by a couple from New York, Alena exhibited an array of symptoms such as heart murmur, slight hearing loss, short stature, slightly stooped posture and mildly coarsened facial features. Alena's pediatrician had referred her to a pediatric cardiologist, who felt there might be more to Alena's problem than a simple heart murmur and recommended that she be seen by a medical geneticist.  Alena's mother, Marcia, was given Dr. Marion's name.

Within minutes of meeting Alena in the waiting room at the Children's Hospital at Montefiore, Dr. Marion suspected that the little girl had Maroteaux-Lamy syndrome (also known as Mucopolysaccharidosis, type VI)—a life-threatening condition in which cells that form the body are missing an enzyme needed to break down complex chemicals. Testing confirmed his theory.  Marcia was devastated. But as luck would have it, Dr. Marion had read of an experimental enzyme replacement therapy for Maroteaux-Lamy and, with Marcia's permission, he tried to get Alena into a Phase 3 clinical trial. Although that wasn't possible because of her age, when Naglazyme was approved by the FDA, the youngster was the first patient in the northeast to receive the treatment. Today, thanks to ongoing drug treatments, Alena is a bright, physically active teenager with a busy social life.

In the spring of 2009, the Einstein Women's Division honored Dr. Marion with its Spirit of Achievement Award.  The award, which cites individuals who have made outstanding contributions in their fields, was presented to him by Alena.

Shaping the Future of CERC 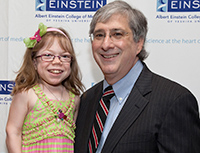 Alena with Dr. Marion at the 2009 Spirit of Achievement awards luncheon.Soon after taking the helm of CERC, Dr. Marion set about realizing his long-held vision of bringing a clinical research component to the center. Working in close collaboration with Dr. Spiegel, he inspired the members of Einstein's Women's Division to raise $3 million toward the hiring of CERC's first research director—Einstein alumnus John Foxe, Ph.D. '99, a leading cognitive neuroscientist.

Beyond diagnosing and treating the medical problems he encounters in the clinic, Dr. Marion is determined to help shed light on their biological origins. He is optimistic that the rapid advances taking place in the burgeoning arena of genetics research will speed the discovery of better ways to treat and prevent these debilitating conditions and relegate them to medical history.

For the past few years Dr. Marion has embraced the role of physician-scientist, pursuing his own research, which he intends to continue. Currently, he is collaborating with Einstein faculty members Drs. Bernice Morrow and John Greally on a project to determine the genomic profile of autism and other developmental disorders. In addition to several other genetics studies focused on autism, he is investigating 22q11 deletion syndrome, a group of physical and neurological disorders caused by the deletion of a small piece of chromosome 22. Children with 22q11 are frequently misdiagnosed as having autism.

For many years Dr. Marion shared his knowledge and teaching talents by conducting genetic rounds at CERC. So he was no stranger to the center when he succeeded Dr. Herbert Cohen, who retired as director in 2006.

Reluctant to relinquish administrative responsibility for CERC until a transition plan was in place, he developed one last winter, with the help and support of Dr. Spiegel and Dr. Judy Aschner, Einstein's new chair of pediatrics. Then, in early August, Dr. Marion called his staff together for a special "town hall meeting" to officially announce the change in leadership at CERC. In a heartfelt speech, he emphasized that CERC is one big family, and thanked everyone present "for permitting me to be a part of that family."

"I will not be disappearing from CERC," he reassured his friends and colleagues. "I plan to continue playing a role here. So, this is far from goodbye."

As he transitions to strictly clinical work, Dr. Maris Rosenberg, associate professor of clinical pediatrics, who has been director of medical training at CERC for the past 27 years, will serve as the center's interim director.

A Gifted Educator and Author 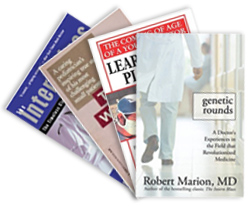 Since 1984, Dr. Marion has been an inspiring teacher and mentor to countless Einstein medical students and postdocs. He has been awarded the Samuel M. Rosen Award for Excellence in Medical Student Teaching (selected by Einstein's medical students); the Lewis M. Fraad Award for Residency Education and the Obrinsky Award for excellence in medical student teaching in the department of pediatrics; and was inducted into the Leo M. Davidoff Society, which honors teachers who have made outstanding contributions to the education of students and Einstein.

In addition to teaching, Dr. Marion has also thrived as a writer. He is the author of seven books including The Intern Blues, The Boy Who Felt No Pain (winner of a Christopher Award), Learning to Play God and Genetics Rounds: A Doctor's Encounters in the Field That Revolutionized Medicine. Some of these works of fiction and nonfiction have been translated into approximately 10 languages. All of them illuminate the human side of medicine in Bob Marion's sensitive, compelling voice.

With his passion for working with patients, Dr. Marion plans to remain active on the clinical front, seeing patients at CERC once a week and at the Children's Hospital at Montefiore several times a week. He will stay on as medical director of the Einstein-Montefiore Williams Syndrome Clinic, which he founded, and as director of the Einstein/Montefiore spina bifida clinic. He also will continue his involvement with the new cardiogenetics clinic at Montefiore and, over the next few years, will assist with three other Montefiore clinics: the 22q11 deletion syndrome clinic; the craniofacial center for children with cleft lip and cleft palate; and the clinic for Hermansky Pudlak Syndrome, which primarily affects Puerto Rican children.

"Bob Marion's contributions to Einstein have been immeasurable," said Dr. Spiegel. "He embodies the College of Medicine's mission to train the most compassionate and highly skilled physicians and researchers."

"We at CERC feel extremely fortunate that Bob will continue to play an active role as advisor, consultant, teacher, and director of the RFK UCEDD," added Dr. Rosenberg. "Personally, I am proud to be his friend, grateful for all that he has taught me and look forward to continuing to learn from him for many years to come."