A Woman with Initiative

"Family" was the underlying theme of the celebration held on June 27, 2013, to commemorate the career and life of Dr. Sylvia Wassertheil-Smoller. "At Einstein, my mom gained much more than a job. She gained a second family," Dr. Jordan Smoller told the more than 100 colleagues, relatives and friends gathered in Lubin Dining Hall to honor her. 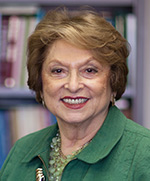 Dr. Sylvia Wassertheil-SmollerHis heartfelt comments, and occasional teasing about her nurturing ways, mirrored those of the event's other speakers, who ranged from leadership at Einstein and Montefiore Medical Center to colleagues and former students. More than one identified her as "the ultimate mensch," emphasizing her warmth, generosity and genuine caring for colleagues and students, as well as her willingness to get in the thick of things. There was even a poem that paid homage to her flair for fashion.

In addition to the verbal accolades, Dr. Smoller was named distinguished university professor emerita of epidemiology & population health and the Dorothy and William Manealoff Foundation and Molly Rosen Chair in Social Medicine Emerita.

She was one of 161 faculty members newly hired in Einstein's so-called "Class of '69"; 44 years later, only she remains. During that time, she served as an investigator, educator, administrator, and mentor to generations of students, fellows and junior faculty. 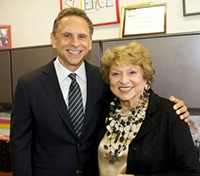 Dr. Smoller with her son, Jordan.In 2002, WHI reported that use of hormone replacement therapy (HRT) — thought to prevent a range of health problems in postmenopausal women — actually raised the risk of heart attack, stroke, and dementia. The study also found that HRT increased women's breast cancer risk. "These findings resulted in a marked drop in the prescription of hormones for postmenopausal women," noted Dr. Smoller. "As a result, I think many lives have been saved."

Quick to note that she's not done yet, she added "In WHI's latest phase, we're doing genetic studies and conducting the ‘Long-Life Study' of 8,000 women who have surpassed age 80."

"Sylvia is remarkable as a researcher and as an individual. Her contributions have helped create enormous opportunities for our department," said Dr. Thomas Rohan, professor and chair of epidemiology & population health.

For example, she was founding principal investigator at Einstein of the NIH's Hispanic Community Health Study, for which the College of Medicine is one of just four sites nationwide examining a variety of health determinants among Latinos. She also was a founding member of the American Heart Association's Task Force on Women's Health, and has published more than 200 scientific papers and book chapters, as well as a textbook: Biostatistics and Epidemiology: A Primer for Biomedical and Health Professionals(Springer-Verlag).

"I owe my science career to my father. He promulgated a spirit of enquiry – almost a Socratic method," recalled Dr. Smoller. Her ultimate focus on medical research, however, was influenced by the death of her first husband, David Wassertheil, who died of Hodgkin's disease, in 1968, when their son, Jordan, was six. Dr. Smoller recalled, "I knew nothing about medicine, but I wanted to know what Hodgkin's disease was, what caused it and how such a devastating thing could happen." 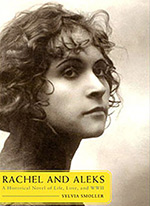 Dr. Smoller's historical novel, Rachel and AleksThe following year, she joined what was then Einstein's department of community health as an assistant professor and became the first statistician on the Einstein faculty. "I was a single mother then, and I did my best with a lot of help," she recalled. "One thing I always did was have dinner every night at home with my son."

Those dinners clearly had an impact. Jordan Smoller is now associate vice chair and director of psychiatric genetics at Massachusetts General Hospital, and professor of psychiatry at Harvard Medical School. He also is one of his mother's favorite collaborators.

In 2009, using WHI data, they found that postmenopausal women who take antidepressants face a slightly increased risk for stroke and death. And now, they're collaborating on the fourth edition of her textbook.

"Working with my son has been unqualifiedly fantastic," she said. "When we write a paper together, the right word comes to one of us and we both recognize it immediately."

The feeling is mutual.

"My mother has been an inspiration to me for all of my life", he told the assembled celebrants. "It's no coincidence that I ended up becoming a scientist, physician and epidemiologist.  I have learned to listen to my mother ? which is why I brought a sweater in case it gets cool. But what has been most inspiring to me is her courage, her optimism and love of life despite the inevitable losses and sadness it can bring. Her remarkable ability to balance her work life and her family life, and even to make her work life into a family life."

Looking to the Future

While Dr. Smoller plans to keep a hand in the research realm, she also looks forward to spending more time with her "amazing granddaughter," four-year-old Ava.

She also may use the time to write.  In 2007, she published Rachel and Aleks, a historical novel that is really a fictionalized account of her family's escape from the Nazis. "I wanted to show how so many things in life hang by a thread."

Rarely one to sit idly, she added, "While I may also take a course in literature or music, for now I plan to take some time to see what the future might hold."

(To view slideshow of gallery, click on an image below; then move your mouse over the left or right margins to navigate.)