Home > Features > One Size Does Not Fit All: Researchers Explore the Complexity of Pancreatic Cancer

One Size Does Not Fit All: Researchers Explore the Complexity of Pancreatic Cancer

For most patients, a diagnosis of pancreatic cancer is synonymous with a death sentence. This is particularly so for individuals with the common form, known as adenocarcinoma, which affects the cells that provide the fluids and enzymes required for digestion. But there also is a rare type of pancreatic cancer that arises from the neuroendocrine or islet cells in the pancreas, where hormones such as insulin are produced. This type of cancer results in a different clinical picture. Einstein scientists are engaged in innovative research that addresses both types of cancers of the pancreas. 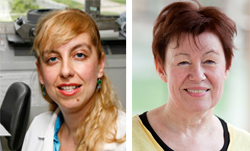 Ekaterina Dadachova, Ph.D. and Claudia Gravekamp, Ph.D.The prognosis for adenocarcinoma of the pancreas is certainly grim. The disease is insidious, and is among the deadliest of cancers, with a five-year survival rate of only 4 percent. More than 45,000 new cases will be diagnosed this year, while more than 38,000 people will die from the disease, according to the National Cancer Institute.

While many types of cancers can be cured by surgery or radiation if detected at an early stage, that is not the case with this type of pancreatic cancer.  It rarely causes noticeable symptoms, and usually is only diagnosed after it has metastasized to other organs, an advanced stage for which current treatments are minimally effective.

Dr. Ekaterina Dadachova, professor of radiology and of immunology & microbiology, and Dr. Claudia Gravekamp, associate professor of microbiology & immunology, have set their sights on improving the prognosis for patients with this type of pancreatic cancer. Employing a unique approach, they have used a weakened form of Listeria bacteria to infect tumor cells in a mouse model to deliver a radioisotope.

Mice treated with this technique experienced a 90 percent reduction in the number of metastases, compared to untreated controls. Their findings were published in the May issue of the Proceedings of the National Academy of Sciences.

The key to the therapy is the ability of the Listeria to infect tumors selectively; that is, without also harming normal cells. In an earlier study, Dr. Gravekamp had shown that cells in the microenvironment of tumors suppress the body's immune response. This allows Listeria to survive in the tumor cells – while normal cells rapidly eliminate the bacteria with help from the immune system.

Dr. Dadachova, who has developed other novel applications of radioimmunotherapies, suggested harnessing Listeria to deliver the radioisotope 188rhenium to pancreatic cancers in mice.

"I was familiar with the 188rhenium isotope from our previous clinical research in which we used it to treat melanoma," she said.  "Its effectiveness is due to the high radiation dose it delivers to the tumor, yet it is also safe because it has a relatively short half-life."

While the initial results are encouraging, Drs. Dadachova and Gravekamp are continuing to refine the technique, and may try "piggy-backing" additional anti-cancer agents for delivery via the bacteria.

"There is much more work that lies ahead before we know if this will become a useful strategy for treating pancreatic cancer in humans," said Dr. Dadachova. "But if we can stop the metastases, it's our hope that we can effectively suppress the disease, and allow patients to live longer."

Addressing another Form of Pancreatic Cancer 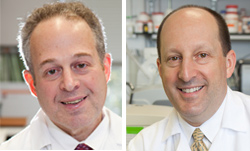 Richard Kitsis, M.D. and Steven Libutti, M.D.As Drs. Dadachova and Gravekamp progress with their studies, another Einstein-Montefiore duo is exploring the other, rare form of the disease, called pancreatic neuroendocrine cancer (this type of pancreatic cancer gained attention when Steve Jobs was diagnosed with it).

Drs. Steven Libutti and Richard Kitsis have teamed to better understand the consequences of the genetic defect that causes the islet tumors that characterize this form of the cancer, which is known as multiple endocrine neoplasia type 1 (MEN1). Pancreatic neuroendocrine tumors account for less than 5 percent of all pancreatic tumors, and can be benign in their course or malignant, according to Dr. Libutti, director of the Montefiore Einstein Center for Cancer Care and associate director of clinical services at the Albert Einstein Cancer Center.

In their research, which is funded with a $1.7 million, five-year "Provocative Questions" grant from the NCI, Drs. Libutti and Kitsis are using a mouse model of this disease to learn how mutations in the MEN1 gene – a tumor suppressor – lead to cancer in the islet "endocrine" portion of the pancreas. "Since patients with MEN1 carry the gene mutation in every cell of the pancreas and other parts of their bodies, we hope to learn why other areas of the pancreas or other tissues are not affected by the mutation in this gene as well," said Dr. Kitsis, director of Einstein's Wilf Family Cardiovascular Research Institute.

"If we can better understand how these tumor suppressor genes are expressed, and the factors that make them tissue-selective, we may be able to better determine which patients need to be treated – and how to treat them," added Dr. Libutti. "The knowledge we gain may also have implications for other types of cancer."

I. David Goldman, M.D.Indeed, researchers at Einstein and elsewhere are realizing that successful treatment of pancreatic cancer and other cancers may hinge on understanding very subtle differences in their genesis. Just as no two patients are identical, no two cancers are. And so treating pancreatic cancers requires an array of therapies.

"As we examine cancers more closely, we are learning that genes associated with cancers in one organ may also be associated with cancers in other organs," noted Dr. I. David Goldman, director of the Albert Einstein Cancer Center. "The hope is that by obtaining a more individualized analysis of each cancer, including the different types of pancreatic cancer, we may eventually create more targeted and less toxic therapies that slow the progression of the cancer, extending lives and improving the quality of patients' lives.

"While we've made incremental improvements, we've barely scratched the surface. Pancreatic cancer is a formidable opponent."