On April 26, 2013, six months after announcing a prestigious $3 million grant from the nationally renowned Glenn Foundation for Medical Research, the College of Medicine officially celebrated the inauguration of its new translational research center focused on the biology of aging. Named the Paul F. Glenn Center for the Biology of Human Aging Research, the facility is dedicated to studying the complex aging process, creating ways to slow and potentially reverse cellular degeneration and reducing age-related diseases. 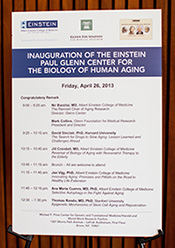 Mark Collins, president and director of the Glenn Foundation for Medical Research, based in Santa Barbara, California, praised Einstein's ongoing commitment to aging research, noting "Einstein and the new center will contribute to improved understanding of aging and move the field forward."

Einstein joins an elite group of only six other research facilities nationwide that have benefited from the Glenn Foundation's generous support of aging research, all of which are part of the Glenn Consortium for Aging Research. The other consortium members are: the Buck Institute for Research on Aging; Harvard Medical School; Massachusetts Institute of Technology; Princeton University; Salk Institute for Biological Sciences; and Stanford School of Medicine.

For the inauguration of the new center, researchers from Einstein, Harvard University and Stanford University gathered to share their aging research findings, which delve into a range of biological and genetic aspects that could prove pivotal in both delaying and reversing biological decline. Ultimately, these investigations aim to prevent or mitigate diseases, thereby allowing people to live longer, healthier lives. 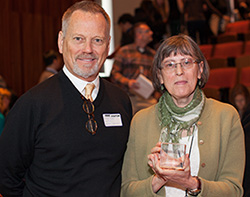 Mark Collins, president and director of the Glenn Foundation for Medical Research, presented Dr. Jill Crandall with a $60,000 "Glenn Award""Aging is a major risk for many debilitating and costly chronic diseases – including cancer, cardiovascular disease, Alzheimer’s and diabetes. These diseases pose a significant burden on public health and national and local resources," noted Dr. Nir Barzilai, director of the new Glenn Center and of both the Institute for Aging Research and the National Institutes of Health’s Nathan Shock Centers of Excellence in the Basic Biology of Aging at Einstein.

Building a Bridge in Research

The launch of the new center occurred at a particularly poignant, time when Einstein investigators are poised to move aging research from animal models to human clinical studies. This represents a paradigm shift in the aging research realm that could help propel the field into new areas of scientific discovery and, ultimately, interventions.

"We're beginning to build that bridge between basic biology and working with humans, which is what we've always aspired to do," said Dr. Barzilai, who also is professor of medicine and of genetics, and holds the Ingeborg and Ira Leon Rennert Chair of Aging Research.

He continued, "The unique research goals of this center are to uncover the genetic and biological mechanisms that protect against human aging and age-related diseases and to develop novel preventive and therapeutic interventions that promote what we refer to as human 'healthspan,' a term we define as enjoying good health for as long as possible." 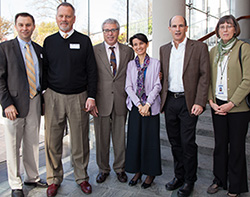 During the celebration of the new center, Mr. Collins presented a $60,000 "Glenn Award" to Dr. Jill Crandall, director of the Diabetes Clinical Trials Unit and of the Clinical Research Methodology Unit in Einstein’s Diabetes Research Training Center. Glenn Award recipients are selected from nominees provided by an anonymous scientific advisory committee. Our interest is in increasing ’healthspan,’ not just lifespan," said Dr. Crandall, who also presented her research during the inaugural event. "We plan to use this support from the Glenn Foundation to enhance our translational studies with resveratrol and to explore potential anti-aging effects of other compounds."

She added, "There have been many promising discoveries related to the basic mechanisms of aging, but very little has been rigorously studied in humans. Testing hypotheses of aging in humans is the necessary first step to develop treatments. Our research will hopefully yield new insights into ways to reverse age-related metabolic disorders."

"If we don't delay aging, then we won't have an impact on age-related disease," said Dr. Barzilai.  "Our new Paul F. Glenn Center for the Biology of Human Aging Research greatly advances our abilities to have a positive impact on human health and aging."