Editor’s Note: Seven years ago, we shared the remarkable story of Lilly Port, a Super Ager taking part in the Longevity Genes Project led by Dr. Nir Barzilai, director of Einstein’s Institute for Aging Research. We share Ms. Port’s story again, in honor of her memory and her contributions to research on healthy aging; Ms. Port died on Saturday, October 24, at 107—just weeks shy of her half birthday. Of more than 750 centenarians who have taken part in the project, Ms. Port also was among the oldest participants at the time of their deaths. Other such individuals include Helen Kestenbaum, who passed away earlier this month at over 107, and the four Kahn family siblings, who lived to 102 (Lee), 106 (Peter), and 109 (both Helen [Reichert] and Irving, though they reached that age years apart). The eldest participant to date lived to age 112. Einstein thanks these individuals and their families for the invaluable insights on aging that their participation has afforded researchers.

On Saturday, May 11, 2013, Lilly Port gathered with friends and family at Chat American Grill, in Scarsdale, NY, to celebrate her centennial. Throughout the sit-down dinner that followed a festive cocktail hour, guests were treated to images from Ms. Port's trip to Machu Picchu, when she was 99, along with photos highlighting other aspects of her life. She told those assembled, "People always want to talk about Machu Picchu, but I've been on safari in Tanzania and to Cambodia, Laos and Vietnam, too." Among travel plans for 2013 are visits to Texas, the Hawaiian Islands, and London.

The hike up to the ruins at Masada, in Israel, is quite steep and challenging enough that an elevator is available for those who prefer a lift. Even so, at the age of 96, Lilly Port walked the at times harrowing, serpentine trail to the top, with her caretaker Carolina Gonzalez by her side. "I climbed up," she said with pride. "Taking the elevator would be cheating." 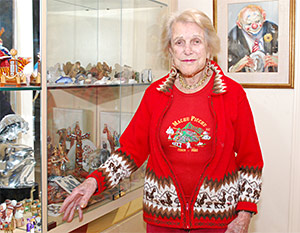 Lilly posing with souvenirs from her travelsThat was four years ago. But time has done little to slow down Ms. Port, who last year, at 99, climbed among the ruins at Machu Picchu. "There were two young men who walked alongside me. They would give me a push to help me when I needed it," said Ms. Port, describing her adventure in Peru.

Just as traveling is in Ms. Port's blood, longevity is in her genes. The centenarian, who turned 100 on May 13, 2013, is a participant in Einstein's Longevity Genes Project, run by Dr. Nir Barzilai, the Ingeborg and Ira Leon Rennert Chair of Aging Research and director of Einstein's Institute for Aging Research. The project is an ongoing study, investigating the genes of Ashkenazi Jews age 95 and older, which seeks to understand why centenarians enjoy extremely long life spans, with physical health and brain function far better than expected in the 9th and 10th decades of life. (Descended from a small founder group, Ashkenazi Jews are more genetically uniform than other populations, making it easier to spot gene differences that are present.)

"Lilly demonstrates how to be young at a very advanced age. She truly inspires us as we seek to understand how healthy aging like hers is possible," said Dr. Barzilai, who also is research director of the National Institutes of Health's Nathan Shock Center of Excellence in the Basic Biology of Aging and co-director of the Paul M. Glenn Center for the Biology of Human Aging Research. "With every step she takes to conquer peaks throughout the world, she also helps us uncover secrets of healthy longevity."

Ms. Port certainly has enjoyed good health — as had each of her three husbands, each of whom lived into his 90s or older. Charlie Port, who passed away several years ago, was 101. "I have been lucky in love and in life," said Ms. Port, whose only health complaint involves a problem with her retina that impedes her vision.

"I am grateful for the technology that allows me to read my New York Times every day," she noted, showing off the special reader that enlarges the newspaper's print so that she can read it — which she does, from cover to cover. "I even have one that fits in my suitcase that I use when I travel. It is wonderful." 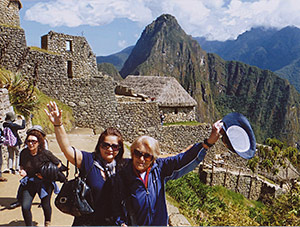 Lilly with Carolina at Machu PicchuDuring her travels, Ms. Port usually has Carolina with her, too, who assists her with reading signs and restaurant menus, and first began assisting Ms. Port when her vision problems prevented her from driving on her own.

In spite of her reduced vision, she otherwise remains active, taking exercise classes at a community center and walking up to a mile or more in a day whenever weather permits. She also goes up and down the winding staircase in her home as often as her needs require it. In a video depicting Einstein's "SuperAgers," she tells Dr. Barzilai "67" when he asks her the number of times per day she uses the stairs.

"I feel really blessed that nothing else bothers me. Fortunately, I'm in good condition."

In fact, she recently sold back the apartment she had purchased "in a fit of madness" at a local retirement community. She explained, "It was very nice, but when I walked in, it felt like old age engulfed me. Most people there used walkers or a wheelchair, and my closest friend no longer recognized me. I realized I don't belong there."

A Shared Love of Travel

Ms. Port believes she comes by her wanderlust naturally. Born Lilly Hahn in Vienna, Austria on May 13, 1913, she recalls her businessman father's love of travel and the many trips she took with both her parents within Austria and to neighboring countries. "It was important to my father that I learn about travel and other cultures. When I was 10 or 11, he made sure I learned English and French. And, as a teen, I spent one winter learning Italian so that I could speak with the natives during my summer vacation there."

She loved travel so much, whenever she saw a train go by she would wonder where it was headed, wanting to be aboard it. "During a visit to England when I was 17, I realized I was happy there because I saw a train go by and I didn't want to be on it," she recalled.

Among Ms. Port's fondest memories of traveling in her youth was a trip to a ski chalet with friends that she took at age 14. "We rented a chalet in the Alps and the skiing was wonderful. Nothing can beat skiing."

She first learned to ski at age 6, and enjoyed both downhill and cross-country throughout her life. She had continued to cross-country ski within the last decade, meeting a group on the golf course that adjoins her home's backyard.

Fleeing the Nazis & Coming to America

Soon after Hitler came to power, Lilly returned to England at the invitation of the family friends she had visited as a teen. "They wrote and said ‘Our home is your home,' and that was like a ticket to heaven. It was very difficult for Jews to travel then." 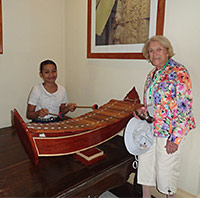 Lilly with young girl playing the xylophone in Laos.After living through the blitz in London, in 1941 Lilly learned that a man named Sandor "Al" Bruck had sponsored her to come to the United States. "He signed an affidavit that said I would not be a burden to society and that he would be responsible for me. I was one of about two dozen people he helped immigrate to the United States."

Having earned a Ph.D. in economics in Vienna, she first worked at Macy's and then General Foods. She also had her own radio show and wrote one of the first books focused on empowering people with disabilities.

Though 30 years apart in age, Lilly and Al fell in love and, at 23, Lilly Hahn became Lilly Bruck. Mr. Bruck was a widower with two grown sons, and the company he owned was the largest manufacturer of nurses' uniforms. He and Lilly were happily married for nearly 50 years at the time he died. And they had a daughter, Sandra, who now lives in Texas with her husband.

Thanks to Al's shared love of travel, the couple took many cruises and other vacations, seeing sights throughout the world, including Japan, China, Kenya and Hawaii.

Ms. Port also enjoyed travel cruises with her second husband, David Lieb, and with Charlie. "I went to Hawaii with Al and David. It is one of my favorite places. Unfortunately, Charlie and I were not able to get there together."

This July, she will return to Hawaii once more, this time with Carolina, her husband and their daughter. "They have never been to Hawaii, so I am taking them. They take care of me and give me a nice, warm life. This is something I can do for them."

She added, "It's exciting to see new places, and to find out about different people and how they live. I hope to travel as long as I can walk and can afford it."

(To view slideshow of gallery, click on an image below; then move your mouse over the left or right margins to navigate.)