Einstein Scientists and Machinists Team Up on a Unique Collaboration

Einstein is known as an institution without walls, a place where even graduate students and postdocs can reach across disciplines to seek partners in study who can help them achieve their research objectives. While these collaborative efforts usually take place among Einstein researchers, occasionally, they take on different players. This outside-the-box, "what-if" approach to questioning life's mysteries has led to some interesting outcomes – few more so than a recent collaboration between Einstein researcher Dr. Arne Gennerich, Einstein M.D.-Ph.D. student Matthew Nicholas and three members of Einstein's machine shop staff. 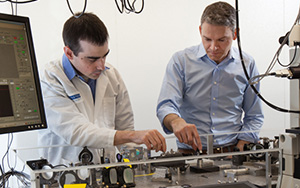 Arne Gennerich, Ph.D. (at right) with MSTP student Matthew NicholasDr. Gennerich, assistant professor of anatomy and structural biology and a member of Einstein's Gruss Lipper Biophotonics Center, researches cytoplasmic dynein, a motor protein akin to a tiny biological nanomachine, which helps transport cellular organelles, like mitochondria, along a network of microtubules from the outer areas of a cell towards the nucleus. These microtubules are analogous to railroad tracks, with dynein like a locomotive.

"We study this process to observe dynein dysfunction on the single molecule level – at the nanoscale level – to identify molecular defects caused by mutations in proteins that regulate dynein function in nerve cells," explained the electrical engineer turned biophysicist and cell biologist. "In doing so, we seek to identify the basis for therapies for a range of neurological diseases in which dynein dysfunction has been implicated, such as motor neuron degeneration and the birth defect lissencephaly."

To conduct his studies, Dr. Gennerich uses microscope technology that can visualize motor proteins moving inside cells. But he and Mr. Nicholas – a student in his lab – wished to do so with even greater detail. They envisioned building a better microscope that would allow them to image the movements of individual motor proteins and their accessory proteins, while simultaneously measuring the forces that these tiny proteins generate.

Imagine looking at a satellite image of New York City on Google Maps, where you see the Bronx, Brooklyn, Queens, Manhattan and Staten Island as if they were a clump of cells and then you zoom in on a specific ‘cell,' such as the Bronx, for a more detailed view. 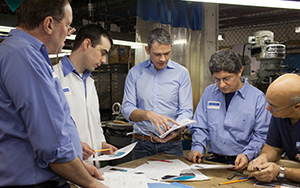 The team (from left): Mike Rottenkolber, Matthew Nicholas, Arne Gennerich, Ricardo Ibagon and Tony Leggiadro"Using our scope, you zoom in even further, and you can see individual cars and trucks moving on the roads around the Einstein campus," said Mr. Nicholas. "Think of dynein as a truck carrying cargo, and we want to follow its movement and measure the horsepower of its engine."

To get this kind of in-depth detail, the researchers needed a unique, high-resolution, multicolor-imaging microscope with the ability to measure molecular forces. Only it didn't exist.

Scoping Out the Specs

They decided to create such a microscope themselves, but found it would require customized parts in order to meet their specific needs. "That's when we turned to Tony, Mike and Ricardo," said Dr. Gennerich.

Tony, Mike and Ricardo are Tony Leggiadro, who heads the Einstein machine shop within facilities management & engineering, and his colleagues, Mike Rottenkolber and Ricardo Ibagon. Together, the three men have 130 years of experience as machinists and fabricators between them. They describe themselves as "all-around prototype machinists" who can modify or retrofit off-the-shelf equipment to enable Einstein's researchers to conduct their experiments. When the right part is not commercially available, they build it from scratch.

"The scientists show us schematic drawings, and we discuss what they want the apparatus to be able to do. Then we make measurements and help fine-tune the design or suggest alternatives if we don't have the equipment to execute the original design," explained Mr. Leggiadro.

In this case, Dr. Gennerich and Mr. Nicholas needed some customized parts to complement specific components they were using to construct the scope. Their microscope combines laser and sensitive fluorescence imaging cameras, and one design challenge was the need to stabilize the laser beam, which forms an optical trap to increase the precision of the measurements made with the microscope.

"A tug-of-war between dynein and the optical trap, created by focusing the laser through the lens, allows us to measure the maximum amount of force dynein can exert to pull cargo along a microtubule," explained Dr. Gennerich. "We can determine this by noticing when the protein molecule is unable to escape the trap to continue moving forward." 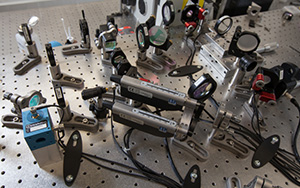 A close-up perspective of the microscopeHowever, because air circulation in the room can slightly misalign the laser beam, and because they are looking at such tiny objects, the researchers' measurements could be thrown off. To address this, Mr. Nicholas and the machine shop team designed and built an airtight acrylic plastic box to encase the microscope components, which are arrayed on a long vibration-free table. A lid with handles allows the scientists to get inside the box to calibrate or move equipment.

"The box was a weird configuration, and we couldn't use flat gaskets to create airtight seals, so we came up with a flexible gasket made from silicon tubing," said Mr. Leggiadro. "To make it, we had to get special tools, and then modify the tooling."

"We went through at least two rounds of design and revision," said Mr. Nicholas, who assembled the box on the microscope along with Mr. Ibagon once all the parts for the box had been fabricated.

"That box was one of dozens of parts we made," recalled Mr. Rottenkolber. The machinists also fabricated mounts of various shapes and sizes for lenses, mirrors and other optical components that had to be precisely positioned.

While a handful of labs have also developed combined fluorescence imaging and optical trapping microscopes, the Gennerich-Nicholas creation has a capability the others don't – detecting up to four fluorescent colors simultaneously. Tagging dynein, microtubules and other proteins that bind to dynein with different fluorescent dyes offers simultaneous visualization of their interactions. This  helps researchers see how these molecular elements regulate dynein's motion and force generation along the microtubule.

"Few labs worldwide have the expertise and resources to implement this type of microscope," said Mr. Nicholas.

"Because Einstein is committed to providing the resources and in-house expertise, we can do such groundbreaking work," added Dr. Gennerich, who estimates that a commercially built scope comparable to their creation would cost $600,000, rather than the $250,000 they spent.

"Thanks to this support, we are pushing the limits of microscopy techniques that can help us understand the molecular causes of human disease. This is central to the mission of our Gruss-Lipper Biophotonics Center," said Dr. Gennerich.