At a special luncheon designed to introduce Einstein’s Office of Diversity Mentoring and how it can help members of underrepresented groups at the College of Medicine build successful careers in the face of often overwhelming odds, Dr. Genevieve Neal-Perry, Einstein’s recently appointed associate dean for diversity mentoring, stated: “Knowing about enrollment and graduate rates for underrepresented individuals in health and science is powerful knowledge. And I am here to be your advocate for obtaining information that can help you develop a plan to achieve your career goals.” 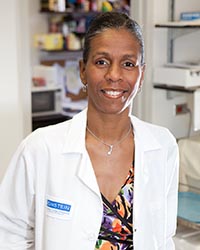 Genevieve Neal Perry Dr. Neal-Perry has embraced her new role because she knows firsthand how important mentors can be – especially for people from diverse backgrounds. “None of my family members are in medicine or science,” she said. She credits two “wonderful mentors” with helping her succeed.

“I’m not a super outgoing person,” she said. “But my mentors told me, ‘You have to make sure you’re meeting the people in your field and you must get out there and talk about yourself and your research.’”

In shaping the office of diversity mentoring, Dr. Neal-Perry is doing all she can to help junior faculty, postdocs, and Ph.D. and M.D.-Ph.D. students from diverse backgrounds do the same, developing programs that will facilitate career development and excellence at Einstein and beyond.

To accomplish this, she and her staff will be introducing a variety of events and opportunities. These include presentation of awardsto senior faculty members who have mentored Einstein junior faculty in their career development, and holding town hall meetings, the first of which will be held in mid-February, focused on “Achieving Institutional Excellence through Diversity and Inclusion.” Dates for other events are in the works, as well, and will be posted on the Diversity Mentoring website. 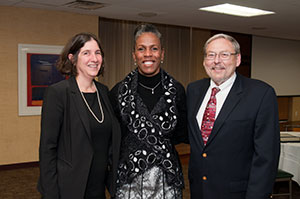 Dr. Neal-Perry with Drs. David Spray and Betsy Herold, recipients of the 2012 Faculty Mentoring AwardsDr. Neal-Perry also is creating a “circle of mentors,” a designated group of Einstein faculty members who will be available to give critical feedback to junior faculty on grant proposals, and developing a “mentoring alliance,” an online site through which junior faculty can post specific questions that will be answered by mid- to senior-level faculty members according to their areas of expertise. She also plans to establish a “mentor institute,” through which faculty members will receive training to become mentors; to hold a retreat, “It’s All about Science, Mentoring and Career Development,” aimed at faculty, postdocs, and Ph.D. and M.D.-Ph.D. students; and to host an annual Excellence through Diversity Day.

Why Focus on Underrepresented Groups in Science and Medicine?

Einstein’s focus on diversity mentoring mirrors an important national trend. According to the Center for American Progress, a nonpartisan educational institute based in Washington, DC, underrepresented minority groups now make up 36 percent of the workforce – a figure that is expected to increase as the nation becomes more racially and ethnically diverse.

Despite their growing numbers, however, women and minorities are still under-represented in medicine and science. For example, while African Americans comprise more than 13 percent of the U.S. population, they make up fewer than 4 percent of doctors. “It’s challenging when people think the world is color-blind just because it’s 2012,” said Dr. Caryn Rodgers, assistant professor of pediatrics, who has been a mentee and a mentor.

“That mentorship was pivotal in my career development because it allowed me to see in the flesh that I, too, could do this", said Dr. Rodgers, who earned her Ph.D. at St. John’s University. “It made a huge difference in my feeling of possibility.”

Dayle Hodge, a third-year Einstein M.D.-Ph.D. student currently pursuing the Ph.D. portion of his dual degree, agrees that it’s crucial for aspiring professionals to have relatable role models. He serves as a mentor to several African -American and Hispanic American students from Fordham and Lehman Colleges. Because his mother was a doctor, Mr. Hodge did not view a medical career as unattainable. “But many black kids don’t know an engineer, a lawyer or a doctor, so they don’t consider those things doable.” 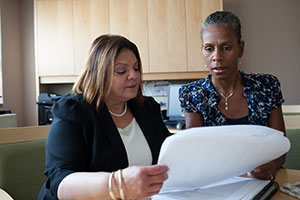 Dr Neal Perry with Elizabeth Piñzon, Ed.D., administrator for the office of diversity mentoringHe continued, “Minority youth are not getting enough positive messages that they can succeed.” Among the challenges, he noted, is that in some minority communities ambitious youths are led to believe that doing well and having such aspirations is uncool.

“Serious students may be viewed as ‘outcasts’ — people who think they’re better than those around them,” he explained.

Another Einstein mentor and mentee, Chinazo Cunningham, emphasized the importance of talking with mentees about issues that go beyond diversity. At Einstein, Dr. Cunningham is an associate professor of family and social medicine, but at home, she is a wife and mother of three children. “Prospective mentees often ask ‘How you do this with kids?’”

Dr. Cunningham is currently mentoring two Einstein residents and four junior faculty members, meeting with each weekly. “Although it’s a lot of work to do mentoring the way I believe it should be done,” she said. “I really want to take people on and make that investment.”

To be a good mentor, say those who’ve done it, it’s important to create an environment where growth and candor are encouraged. “One of the things I valued in my mentor-mentee relationship was honesty and mutual respect,” said Dr. Neal-Perry. “If they didn’t agree with something I proposed, they would freely express why they disagreed with me. But they would also remind me that I should always consider the pros and the cons of the discussion and that in the end it was a decision that I would have to live with.”

Looking ahead, Dr. Neal-Perry wants every member of Einstein’s junior faculty to have mentoring and career development plans in place. “They don’t have to follow them exactly,” she concluded. “But I want to see that they’ve thought about their interests at the career and personal level, they have a vision for a five-year and a ten-year career development plan and that they’ve considered how their personal as well as professional lives will intersect throughout the years to come.”