Home > Features > The Einstein Aging Study: Unlocking the Mysteries of Alzheimer's and the Brain

The Einstein Aging Study: Unlocking the Mysteries of Alzheimer's and the Brain

Once a year, Edward and Grace Siemer come to Einstein to undergo evaluations. In addition to a standard physical examination, they are given tests of brain function to assess their ability to think, move and feel. These tests, which are conducted as part of the Einstein Aging Study (EAS), reveal information about their abilities for memory and planning, and assess their coordination, strength, balance and walking – all of which are critical for maintaining independence late in life. Participants also have the option to receive biochemical tests of their blood and saliva, physiological tests and an MRI of the brain. 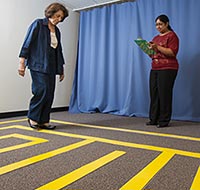 Tests assess participants' gait and coordinationMr. and Mrs. Siemer, who are in their early 80s, don't have to worry about insurance or copayments for these evaluations, though, since they are participants in the EAS.

"Taking part in the research has had other benefits, "noted Mr. Siemer. "One time, they found my blood pressure was elevated and the neurologist made a referral to my physician."

"He ended up getting by-pass surgery," added Mrs. Siemer. "We're so grateful that his problem was picked up, and truly believe a massive heart attack was avoided."

Supported by a grant from the National Institute of Aging, the EAS team includes neurologists, neuropsychologists, social workers and other healthcare professionals. During the four decades of research conducted thus far, more than 2,000 individuals have been studied, all Bronx residents, 70 years and older. In studying them, the researchers have sought to learn about the normal aging processes of the brain and to understand the challenges resulting from Alzheimer's and other forms of dementia. 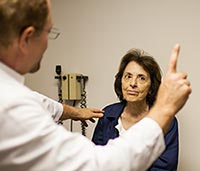 During the physical exam"One of the overarching themes of our research is identifying risk factors that promote healthy brain aging and prevent Alzheimer's disease," said Dr. Richard Lipton, director of the EAS since 1992, professor and vice chair in the Saul R. Korey Department of Neurology, and the Edwin S. Lowe Chair in Neurology. "Everybody knows if you want to prevent heart attacks and strokes, you watch out for high blood pressure and high cholesterol. That same notion of risk factor modification is applicable to Alzheimer's. Some of the risk factors overlap, like obesity, diabetes and blood pressure.

"We also study some novel risk factors such as chronic pain and mall vessel disease," he added. "And we examine behaviors that may positively affect the brain, such as cognitive engagement and physical activity."

In the course of their studies, the EAS staff has developed several of the most widely used neurocognitive tests that assess memory and other brain exercises. They also have developed procedures to use these tests to detect current Alzheimer's disease at its earliest stage and to predict the future onset of dementia. "If we can identify individuals who have early indicators of Alzheimer's, who have not yet developed dementia," noted Dr. Lipton, "we might be able to develop strategies to protect them from the disease's devastating consequences."

"Because we want our study participants to be representative of older adults in our Bronx community, we identify potential participants from Medicare or voter registration lists and select people at random for an invitation to the study," explained Dr. Lipton. After screening potential participants on the telephone, those who are eligible are invited to the EAS center for an assessment. At any given time, the EAS is tracking from 600 to 700 individuals.

"There are a lot of very interesting memory tests," said Mrs. Siemer. "They might give you a short story and then ask you to relate it back to them, giving all the important info."

"They'll also give you a series of numbers and expect you to feed them back to them," her husband added. "And sometimes they'll ask you to say the alphabet while you're walking."

According to Dr. Lipton, this latter test helps identify whether a person's mind can synchronize two tasks at the same time, since many older people have a tendency to stop moving if they're talking or figuring something out. Often, these exercises are timed so that researchers can track an individual's performance over years of study participation.

The testing process also allows for the "good days and bad days" that many older people experience. "We do very frequent measures of cognition," explained Dr. Lipton. "For example, we might give somebody a short cognitive test for 10 days in a row. Chances are, in that period the good days and the bad days will average out." Participants take these tests using specially programmed smartphones.

Among its findings, the EAS team has found that "cognitive reserve" plays a large part in a person's ability to withstand major or minor damage to the brain. "The better educated you are, the more you participate in cognitive activities, the more cognitive reserve you have," said Dr. Lipton. "People who did things like completing crossword puzzles, playing chess or writing for pleasure showed less memory decline as they got older."

The Einstein Aging Study teamHe added, "We surmise that these forms of cognitive engagement may stimulate the brain. Or perhaps if you're highly educated, you have a lot of synapses and may be able to withstand more brain insult before you develop cognitive decline."

The Einstein team also is examining the link between pain (as in arthritis or nerve damage) and future cognitive problems. "We ask participants how much pain interferes with their ability to do daily activities," said Dr. Molly Zimmerman, an EAS investigator, neuropsychologist and assistant professor of neurology. "That's data we're collecting right now. Once you experience pain chronically, it sets up a certain biological cascade within the brain that may have negative effects on brain structure and function."

To further illuminate how the brain changes when chronic pain is present, Dr. Zimmerman also is using neuro-imaging. "We're examining the mechanisms that link pain to Alzheimer's and we believe it's a remediable risk factor, because most pain is treatable," she noted.

Vascular disease may be another factor in cognitive decline, and Dr. Carol Derby, associate professor of neurology, heads a new EAS project focused on this. "Using retinal photography, we can study the structure of the small blood vessels in the retina, which offers a good indication of what the structures of the small vessels in the brain might be," she explained.

In addition, a special ultrasound study will test how well the vessels in the brain constrict and dilate in response to demands for oxygen. "These are unique, non-invasive measures that allow us to study what's going on in the brain," said Dr. Derby. This particular study is so new the data is still being collected.

Over the course of the EAS's four decades of study, the fields of cognitive aging and of Alzhiemer's disease have been completely transformed by developments in diagnostic tools, identification of preventable risk factors and the ability to identify early Alzheimer's disease, as well as by developments in neuroimaging and blood markers, and the emergence of promising new therapies. During that time, findings made by Einstein investigators have contributed greatly to what we know about aging.

"We also do a lot of work with genetics, looking at common genes that contribute to the development of Alzheimer's and other genes that may protect the brain, said Dr. Lipton. "The APOE-4 gene variant is one such gene linked to increased risk for Alzheimer's."

He concluded, "Our investigators have been on the cutting-edge of many of these exciting developments. But our success would have been impossible without people like the Siemers, who continue to generously participate in our research. There are no words to properly express our gratitude to each participant and to our remarkable community."