Trying to outrun an avalanche – that's a good metaphor for what the Diabetes Clinical Trials Unit at Einstein is trying to accomplish. 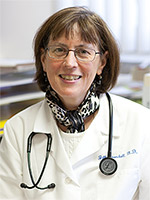 Jill Crandall, M.D."If we don't find a way to prevent or delay diabetes and its complications, we are facing a national tragedy in terms of people's quality of life and productivity, and massive healthcare costs," said Dr. Jill Crandall, an endocrinologist who is professor of clinical medicine and director of the Einstein-Montefiore Diabetes Clinical Trials Unit.

According to the Centers for Disease Control and Prevention, more than 25.6 million Americans have type 2 diabetes, and another 79 million have risk factors for the disease. With doctors diagnosing 1.9 million new cases each year, one in three Americans will eventually develop diabetes if current trends continue.

In addition, the American Diabetes Association has estimated that total healthcare expenditures for each person with diabetes are $11,744 a year. Much of these expenses go to diabetes education, nutritional counseling, glucose monitoring, medication to control blood glucose levels and treating complications of the disease – which can include blindness, kidney failure and amputations. Without effective treatments to reverse or stop progression of impaired glucose tolerance (IGT, also known as prediabetes) to diabetes, it's estimated that related costs will spiral even higher.

Stopping Trouble Before It Starts 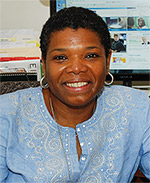 Janet Brown-Friday, R.N., MPHThe National Institutes of Health (NIH) has funded several large, long-term studies to address this looming public health crisis. Einstein is 1 of 27 sites nationwide taking part in the Diabetes Prevention Program (DPP) and its long-term follow-up, the Diabetes Prevention Program Outcomes Study (DPPOS). The DPP/DPPOS has followed roughly 3,000 overweight adults with IGT for an average of 10 years to determine whether type 2 diabetes can be delayed or prevented.

The results reveal two approaches that can prevent or delay the onset of type 2 diabetes and reduce risk factors for heart disease: intensive lifestyle changes – modest weight loss; walking, biking or other moderate exercise for at least 150 minutes a week; and limiting fat to less than 25 percent of caloric intake – or treatment with metformin, a drug already in use to treat diabetes by improving insulin sensitivity.

After approximately 10 years of follow-up in the DPPOS, participants in the intensive lifestyle group had a 34 percent lower risk of developing diabetes and the metformin group had an 18 percent lower risk compared to the placebo group, which received only standard lifestyle recommendations. "Obesity is a major risk factor for type 2 diabetes, so it makes sense that losing weight will have a favorable impact on diabetes," said Dr. Crandall, who also is an attending physician at Einstein's University Hospital, Montefiore Medical Center. "And now that we demonstrated we have an effective intervention, clinicians should be more aggressive in screening people for prediabetes."

Making a Change for the Better

For those in the DPP lifestyle group who transitioned into the ongoing DPPOS "it's been about 15 years now, and they have been fantastic in their personal commitment," said Janet Brown-Friday, a registered nurse who is program coordinator for the DPP/DPPOS at Einstein. "They have truly made beneficial changes; some of them appear to be permanent." 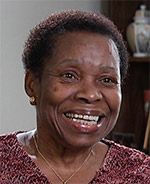 Study participant Althea FowlerOne such participant, Althea Fowler, was eager to be part of the DPP/DPPOS because of a strong family history of diabetes. Her father, an older sister and a younger brother died of related complications. "My brother was only 51 when he died. The year before his death, he had three amputations – first he lost his toe, then they cut his leg off mid-calf, and then above the knee."

Ms. Fowler was 59 years old and overweight when she entered the DPP study in 1999. and was already on medication to control elevated blood pressure and cholesterol levels. As part of the intensive lifestyle intervention, her group received classes to learn about portion sizes and cutting excess fat and calories from their diets, and she began taking four-mile walks several days a week. After she lost roughly 20 pounds, her doctor was able to lower the dose of her blood pressure medication.

"Among the positive outcomes of the study is that interventions developed within DPP/DPPOS are being used as models for health promotion programs for people at high risk of diabetes," noted Ms. Brown-Friday. "These programs teach participants how to make the same healthy lifestyle changes that worked for our study participants."

There also is the "pay it forward" effect among participants. Because Ms. Fowler is so pleased to have avoided diabetes for more than a decade, she makes it her business to share what she's learned about nutrition and often encourages friends and family members to accompany her on a long walk. She's having a positive effect: "One of my friends started walking with me, and now she's got her husband walking with her."

More Work to Be Done

The latest phase of the DPPOS will determine whether complications can be prevented or delayed in people who have progressed from prediabetes to type 2. Dr. Crandall expects this data to be reported in 2015.

"The current average age of our study participants is mid-60s, so this phase will also have implications about maintaining an active lifestyle with advancing age," said Dr. Crandall. Study participants will be assessed for their ability to maintain physical function – gait speed, arm strength, leg strength and balance – as well as for memory and cognition.

With emerging research suggesting a relationship between type 2 diabetes and forms of dementia, "we are zeroing in on whether our interventions will improve other age-related conditions associated with diabetes," said Dr. Crandall.

Dr. Crandall is also looking into another potential treatment to prevent diabetes: resveratrol – a natural compound in grapes and red wine. Based on the promising results of a pilot study she led on the effect of resveratrol on glucose metabolism in people who have IGT, Dr. Crandall was awarded a $600,000 grant from the American Diabetes Association for a larger study that involves 30 people between the ages of 50 and 80 who have prediabetes.

The results of the new study should be reported in 2014. If the earlier finding that taking resveratrol supplements can decrease the spike in blood glucose levels that occurs after meals while also improving insulin sensitivity is confirmed, she plans to propose additional research to determine how resveratrol works and which patients are likely to benefit from taking it.

"Even though weight loss and exercise are effective in preventing or delaying diabetes, we need additional therapies," said Dr. Crandall.  "If treatments such as resveratrol are proven safe and effective, we will have a new approach to help the many people who are at risk for diabetes."

While her research focus has been to stave off diabetes, Dr. Crandall knows this is not possible with all patients. "It's also important for researchers to look into which commonly prescribed drugs to treat diabetes will be most effective in delaying or preventing the devastating complications of the disease," to provide doctors guidance on best practices.

"No intervention will be 100 percent effective," said Dr. Crandall, "which means we have more work to do."