Barn Owls in the Bronx: Offering Clues to Brain Function

While there have been sightings of the occasional red-tailed hawk at Einstein, few would expect to encounter a colony of barn owls.  Yet, a quick elevator ride in the Kennedy Center presents a unique and exotic environment where barn owls are the star. 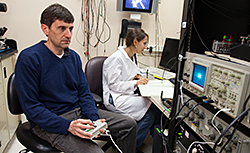 Dr. Peña generates a series of noises while observing the owl's reactions to the sounds and their locationsIt is here that Dr. José L. Peña, associate professor in the Dominick P. Purpura Department of Neuroscience, and his team, are studying how owls hear, with the goal of unlocking secrets connected to brain function.

"Through our research we seek to understand how populations of neurons control behavior," explained Dr. Peña.  "The owl offers advantages because we can easily measure their behavior.  And we can connect neurons with behavior to understand how the neurons code that behavior."

Owls use two main cues to detect sound direction and then create a ‘brain map' of auditory space.  When that occurs, their heads orient toward the sound.  That makes working with owls particularly helpful to understanding how the brain processes sound.

"Owls are the perfect partners for this research because we know the variables and cues they use for detection," Dr. Peña continued. "We can see in the owl's brain where detection occurs, and the head turn is easy to measure." 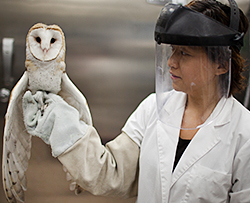 Ph.D. student Jennifer Wang, with one of the owlsTo study the owls, he and his team have built a futuristic soundproof booth that features a hemispheric array of 144 speakers. At its center are a rotating platform where the owl roosts and customized owl earphones.

"The set-up is quite unique," noted Dr. Peña. "Each speaker is individually connected so we can alter the delivery of sounds.  Other labs have just one movable speaker or smaller arrays, but our setup affords better resolution in space and we can stimulate several positions at one time."

Inside the booth, the speakers emit an eerie hushed symphony of click, scratch and rustling sounds.  "These are the sounds that an owl's prey makes at night. It is the sound of mice walking on leaves," Dr. Peña said.

The sound can be completely randomized, explained Jennifer Wang, a Ph.D. student currently working in Dr. Peña's lab.  "It's like raindrops on a tin roof, so they don't know where it will be coming from. 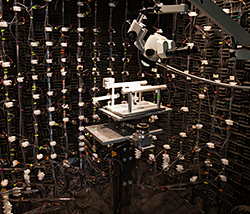 Dr. Peña's futuristic soundproof booth features a hemispheric array of 144 speakers and a perch for the owlsAs the sounds are played, the team measures the neurons' response, the owl's head turn and how much its pupils dilate when it detects a sound.

"Lately we've been studying why owls make mistakes, systematic mistakes, to learn about perceptual biases.  Humans have this, too, so we're observing where and how a bias is created in the brain," said Dr. Peña. Recent findings connected to this work were featured as the cover stories in the August 1 issue of the Journal of Neuroscience, this year, and in Nature Neuroscience, last year.  Additionally, through the Collaborative Research in Computational Neuroscience program − which funds innovative approaches to science and engineering research on brain function−Dr. Peña and colleagues have received an NIH grant for $1.8 million to support collaborative research using his owls.

Of his current work, he noted, "The brain allocates more processing power to critical functions. It dedicates more mass to the frontal space, so that owls have better resolution in the front. However, when the sounds come from the periphery, this leads them to think the sound source is closer to the front than what it really is".

An example of perceptual bias: If you look at oblique lines and horizontal lines, the horizontal lines will look more intense even if they are actually exactly the same lines rotatedHe continued, "It is like ‘betting.' In nature, prey that is more likely caught lies in the front.  If it is farther away from the front, the owls are more likely to miss.  So, the perceptual bias helps to zoom in on the prey that they are most likely to catch."

He added, "The brain has specialized to make us more fit. For example, that's why we have better sense of touch in the tips of our fingers than in an elbow."

Dr. Peña's research in neuroethology is at the forefront of investigation into the neural mechanisms that control behavior.  "Behavioral specializations point us in a direction.  They give us a place to look.  We don't just approach the brain as a black box," he said.

But, it has even larger implications. "Although it seems like I do unusual experiments with exotic creatures that may appear distant from medicine and from daily life, there is value to humans," he said.  "In addition to shedding light on how the brain works, our studies intend to provide a more general understanding of nature; and we need to understand nature because we are part of it."