This summer, the Center for Disease Control (CDC) announced it had expanded its testing recommendations for hepatitis C, for the first time calling for all baby boomers — those who were born between 1945 and 1965 — to get tested for the virus. Baby boomers were singled out because they are five times more likely than other American adults to be infected with the disease. Previously, the CDC recommended testing only for those who have a known risk for hepatitis C. (Complete testing guidelines.) 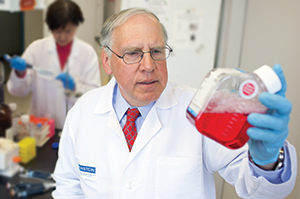 Allan Wolkoff, M.D.Like many people, you may not know much about hepatitis C. A blood-borne disease, hepatitis C likely emerged in the 1960s and then spread widely and silently (symptoms typically don't appear until decades after infection), primarily among intravenous drug abusers and people receiving blood transfusions. A test developed in 1992 now protects the blood supply from hepatitis C contamination. This advance sharply reduced new infections but they still occur, largely among drug abusers. Meanwhile, old infections persist.

"We see many patients who contracted hepatitis C years ago, perhaps through a blood transfusion, by getting a tattoo or by experimenting with drugs with a needle—even just once in their teenage years," said Dr. Allan W. Wolkoff, professor of medicine and of anatomy and structural biology at Einstein and chief of the division of gastroenterology and liver diseases at both Einstein and Montefiore Medical Center.

The CDC estimates that about 3.2 million Americans—more than 1 percent of the population—now harbor the hepatitis C virus. About two-thirds of those infected will eventually develop chronic liver disease, either irreversible scarring of liver tissue (cirrhosis) or, in rare cases, liver cancer.

While there are vaccines for preventing infection with hepatitis C's viral cousins, hepatitis A and B, there's no protection against hepatitis C. On the positive side, for those already infected, drug treatments and lifestyle changes, such as avoiding alcohol, can help prevent hepatitis C's devastating complications. And if all else fails, there's one last option: a liver transplant—although the demand for donated organs far outstrips the supply, limiting the use of this life-saving therapy.

Therapies Good and Getting Better

The outlook for hepatitis C sufferers has never been better. Until recently, doctors had just two, nonspecific medications for the disease: ribavirin (a generic antiviral) and interferon-alpha (an immune system booster). Used together, they can achieve cure rates up to 40 percent. Last year, the FDA approved two new drugs, the protease inhibitors boceprevir and telaprevir, which directly block the virus from replicating. Clinical trials, conducted at Montefiore and other sites, reported cure rates of up to 75 percent when either of the drugs were added to the standard two-drug regimen. (A cure is defined as no sign of the hepatitis C virus six months after the last dose is administered.)

Still, the current treatment regimen is far from ideal, in part because of the continued reliance on ribavirin and interferon-alpha. The latter, in particular, can cause an array of side effects, from joint pain to flu-like symptoms, making it difficult for many patients to adhere to treatment. But that may soon change, according to Dr. Paul Gaglio, professor of clinical medicine at Einstein and medical director of adult liver transplantation at the Montefiore Einstein Center for Transplantation. "I'm optimistic that the next generation of hepatitis C drugs—several dozen of which are already in the clinical pipeline—will lessen our reliance on interferon, or eliminate its use altogether. That should improve treatment compliance and cure rates."

Sanjeev Gupta, M.D., M.B.B.S.Dr. Gaglio and his colleagues at Montefiore are now conducting clinical trials of several promising hepatitis C drugs, including an NS5A inhibitor (which blocks a protein that the virus needs to reproduce) and a polymerase inhibitor (which interferes with the virus's ability to assemble DNA building blocks).

Dr. Gaglio believes that the future of HCV therapy and the ability to eradicate viral infection and cure the vast majority of patients will be a reality. "The future of hepatitis C therapy will likely include combining several different, potent medications to achieve just the right ‘cocktail' " he said. "Ideally, we want a combination of drugs that is effective at killing the virus, but that doesn't lead to resistance and is easy to tolerate."

Thinking Small: MicroRNAs to the Rescue

Meanwhile, Einstein researchers are investigating wholly new therapies for hepatitis C, including treatments based on microRNAs, which are small bits of RNA that cells use to dampen or shut down gene expression.

"One of the great unanswered questions about hepatitis C is why the virus survives and replicates in some individuals but not in others," explained Dr. Sanjeev Gupta, professor of medicine and of pathology and the Eleazar & Feige Reicher Chair in Translational Medicine. A physician-scientist, Dr. Gupta suspects that this variation in response is due, at least in part, to one's microRNAs.

When liver cells are infected with hepatitis C, he elaborated, they react by generating inflammatory mediators—such as natural interferons, cytokines, and chemokines—which ramp up the body's immune response. Infected cells also produce an array of microRNAs in an attempt to silence the virus's genes. However, it appears that, in some people, the hepatitis C virus is able to hijack the microRNAs, turning off those that are harmful to the virus and turning on those that are beneficial.

Using a variety of techniques, Dr. Gupta is trying to determine which microRNAs are involved in this battle royale between virus and cell, and how the balance of power can be tilted in the cell's favor. "Our ultimate goal is to create molecular mimics, that is, synthetic microRNAs, which have antiviral properties."

All of this progress is of little use if people aren't tested for the virus, so that they can undergo treatment before permanent damage occurs. "Before you can treat a disease, you need to know you have it," said Dr. Wolkoff. "The problem is that nearly half of people with hepatitis C don't know they're infected."

Why aren't more people tested for hepatitis C? Physicians deserve some of the blame, acknowledged Dr. Wolkoff, since many are unaware of the risk factors for the disease or are uncomfortable discussing with patients the behaviors related to the infection. "Even a small increase in physicians talking with their patients about hepatitis C could make a big difference."