The challenges of conducting research in a developing nation can be numerous — from political instability that can delay projects for months to collaborators who can only use Internet at night or frequent lack of electricity that can last days. In spite of such challenges, Einstein researchers Drs. David Lounsbury, Ilir Agalliu and Adebola Adedimeji have focused on the benefits that an international collaboration can offer as they embark on a unique research project in Nigeria. 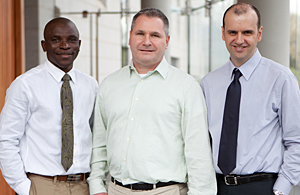 Adebola Adedimeji, Ph.D., David Lounsbury, Ph.D. and Ilir Agalliu, M.D., Sc.D.Before coming to Einstein in 2008, Dr. Lounsbury, assistant professor of epidemiology & population health and of family and social medicine, had the opportunity to meet Dr. Chioma Asuzu, a clinical psycho-oncologist from the University College Hospital (UCH) in Ibadan, Nigeria. While working together for several months at Memorial Sloan-Kettering Cancer Center, the two researchers discussed the health woes in Nigeria, particularly issues surrounding the high prevalence of prostate cancer in Nigerian men and the poor five-year survival rate of less than 40 percent. Through their discussions, they realized there were many cross-cultural issues between their nations and that much could be gained by working together.

Within a year of their meeting, Dr. Lounsbury joined Einstein to work on community-focused cancer prevention and control, giving him the opportunity to observe how health challenges in the Bronx related to similar difficulties in Ibadan.

"I learned how the public health models we're trying to improve in under-served communities in the Bronx are not so removed from day-to-day challenges in Ibadan. Poverty is poverty, and it impacts health as well as the ways in which healthcare institutions can be responsive to the needs of the population."

Through Einstein's Global Health Center (GHC), Dr. Lounsbury obtained a mini-grant for travel to Nigeria, where he learned more about the challenges shared between the Bronx and the most populous nation in Africa. During that trip Dr. Lounsbury met Dr. Akin Adebiyi, from UCH, who had a shared interest in cancer and in assessing and increasing positive outcomes in his community. 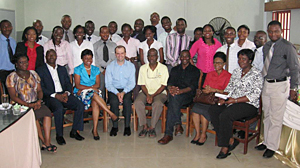 Drs. Agalliu and Adedimeji at front, near center, with members of UCH's department of community medicine."During those initials discussions, we realized that there was tremendous interest in prostate cancer and much that we could learn," said Dr. Lounsbury. "At Einstein, we have a number of experts with interest in and understanding of prostate cancer issues, particularly how they relate to the high prevalence in African-American men in the United States."

One of those experts is Dr. Agalliu, assistant professor of epidemiology & population health. His expertise made him a natural for collaborating on the project. As he relates, "Being originally from Albania, which is still a developing country, makes this so exciting, to see how we can interact in a way that is mutually beneficial to both the developed and developing world."

Soon after Dr. Lounsbury returned from Nigeria, he met another colleague new to Einstein, Dr. Adebola Adedimeji, assistant professor of epidemiology & population health, who also was drawn to the potential collaboration. A native of Nigeria, Dr. Adedimeji was intrigued by the possibility of working with his home country. Moreover, the focus on prostate cancer was of particular interest.

He explained, "I lost a close relative to prostate cancer and that raised my awareness of its prevalence and made me want to do more."

When Dr. Adebiyi visited Einstein during the summer of 2010, the group began to formalize their collaboration by determining the focus and scope of a pilot study. They then received a GHC pilot grant to support their case-control project. Titled "The Feasibility of Population Level Epidemiological Research on Prostate Cancer in Ibadan, Nigeria," its aim is to assess knowledge, attitudes, and beliefs regarding participation in clinical studies. 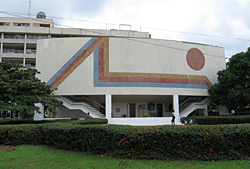 University College Hospital, in Ibadan, Nigeria"We'll look at various aspects of conducting a large-scale study, including the feasibility to recruit appropriate numbers of prostate cancer patients and controls, collect and store specimens, and learn from recruitment and participation rates," noted Dr. Lounsbury.

"We're particularly grateful to our chairman, Dr. Thomas Rohan, who is a co-investigator in the study and has provided valuable input and guidance on how to conduct such feasibility studies," added Dr. Agalliu. "In addition to understanding treatment attitudes, we hope to get preliminary estimates of the prevalence of various risk factors and for family history of prostate cancer in Ibadan. These will help inform any future studies of similar scale that we may do in Nigeria."

Using the GHC pilot grant funding, Drs. Agalliu and Adedimeji traveled to Ibadan to oversee the start-up of the study and set up the protocol and procedures for recruitment of both prostate cancer patients and controls.

"The current study explores feasibility and is focused on individuals who already have a certain form of cancer," explained Dr. Adedimeji. "We also need to look at those who will develop cancer and those who have it but don't know."

To further the capabilities and direction of their studies, the Einstein-UCH team recently joined the University of Pennsylvania Consortium run by Dr. Timothy Rebbeck, a collaborative of approximately eight sites in the United States and South and East Africa aimed at better understanding prostate cancer incidence, mortality, and prevention among men of African descent.

"We're grateful to be invited into this large prostate cancer consortium," said Dr. Agalliu. "We hope our involvement will allow us to build upon our current work. We're particularly interested in  information that can help address the question of whether there may be a genetic link relevant to the high incidence and mortality from prostate cancer in both African-American and African men."

He continued, "The disparity we see in the United States could be genetic or environmental, or it could be related to access to healthcare. We hope to garner further information about prostate cancer markers that can help answer this question."

Through their efforts in Nigeria thus far, the Einstein trio note that there is a wealth of lessons to be learned. "This initial study can help build capacity in Nigeria for future studies, not just in prostate cancer, but in other cancers and other diseases, as well," said Dr. Agalliu. "We're setting up logistics that will support a multitude of large-scale studies in Nigeria."

Dr. Adedimeji agreed, adding, "There is a lot to learn here in terms of dealing with global public health issues. With so much of global health resources supporting the fight against HIV/AIDS, many non-communicable diseases have increased greatly. Now is the time to educate ourselves and to work to reduce the cases of diseases like prostate cancer."

"The world is getting smaller very fast," said Dr. Lounsbury. "Problems in Nigeria are problems for us in the United States, and vice versa. Collaborations such as this are opportunities to exchange information and learn what is working as well as what the challenges are."

He continued, "Working with a different culture helps you to see possibilities faster and quicker because you are getting input from people who are in a different place traditionally and socially. It allows for innovative solutions to our shared problems."