At Einstein, the concepts of community service and social awareness are integrated into the fabric of the institution. However one alumna, Dr. Miriam Levitt-Flisser (Class of 1971), recently took them to a new level when she was elected mayor of Scarsdale, a village in New York’s Westchester County. Prior to her election, Dr. Levitt-Flisser served four years as a village trustee, where she found that her scientific training could be useful in community service as well as in her medical practice. 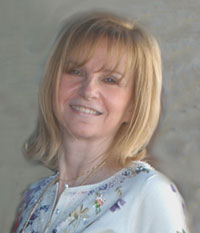 Miriam Levitt-Flisser, M.D., Class of 1971 With a full-time pediatric practice in Bronxville, Dr. Levitt-Flisser also is an attending physician at Lawrence Hospital and a member of its Board of Governors, as well as medical director of the Bronxville school district and its employee health service. She also has teaching appointments at Einstein and at Montefiore, is involved with numerous activities on behalf of people with disabilities, and is a member of a group of physicians who volunteer in emergencies.

While that may seem a lot to juggle, Dr. Levitt-Flisser noted, “Years ago I was a medical resident with three children, including twins, under the age of three. After they grew up, I felt like I was on vacation. It also helps that my husband has always been very supportive and that my work places are close by, so I don’t have to commute very far.” 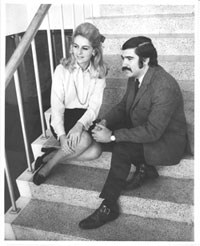 As a student in 1970, Miriam Levitt with husband Harvey Flisser, on the stairs in the vestibule near the D. Samuel Gottesman Library — Photo Credit: NY Daily News Photo Her association with Einstein began at age 14, when she had an internship at neighboring Van Etten Hospital, filing X-rays. "My work supervisor was a paraplegic World War II veteran named Sandy Weinzimmer, who has been a lasting inspiration to me," she said. "Also, when I mentioned I wanted to become a doctor, staff members invited me to meetings and taught me about medical procedures and terminology They certainly didn't have to do that, but it was a great help to me and I've been grateful ever since."

While she loves her pediatric practice, some aspects of it led her to seek solutions. She explained, “The greatest thing that I do is interact with a child, make a diagnosis and then a treatment plan. I like to see results and to fix things. That’s what really counts.”

She continued, “I found that handling all the paperwork in a practice takes a great deal of time but doesn’t really accomplish anything. It’s frustrating and is in part what motivated me to work in local government. There are some problems that can only be solved at the community level, so often my efforts amount to extending my individual practice into public health, where the aims are similar but the means are different.

Mayor Levitt-Flisser working at a village board meeting “For example, if people with disabilities need a ramp to enter a building, or need help with seeing or hearing information, you can provide those things as a public servant. You can enhance public safety, improve recreational facilities and ensure that in an emergency the first responders know if someone in a house has special needs. These are all things I’ve worked on as a trustee that I could not have done as an individual physician.”

Dr. Levitt-Flisser’s experience with the modernization of record-keeping and communication in her medical practice has influenced her approach to urban management, as well., As a result, she pushed for the development of an interactive website in Scarsdale, which allows residents to convey their concerns to government officials online, as well as to sign up for programs and obtain a variety of services.

She credits her own mentors, noting, “Einstein provides excellent medical training while instilling ideals of community service, especially to underserved populations. My own teachers were such great role models, competent and skilled, as well as passionate about their work.”

And today, in her medical practice and political aims, Dr. Levitt-Flisser carries that tradition forward.