Offering Insights into the Heart

In the world of academic medicine, Dr. Mario Garcia is known as a triple threat – a physician who also is an investigator and an educator. Dr. Garcia arrived at Einstein earlier this year, bringing his expertise and renown in cardiac imaging to the Bronx. Throughout his career, he has played a major role in both advancing our ability to image the cardiovascular system and educating cardiologists about all aspects of cardiovascular diagnostics. 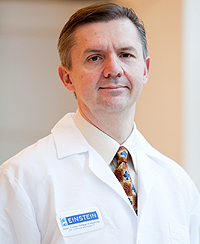 At Einstein, Dr. Garcia is professor of medicine and of radiology, while at Montefiore he serves as chief of the cardiology division. He also holds the Pauline Levitt Endowed Chair in Medicine and is a member of the Wilf Family Cardiovascular Research Institute. In these roles, he will conduct research, teach students and physicians, and serve the diverse patient population that seeks care at Montefiore.

“Our faculty and students are extremely committed to the service of our diverse community, especially one that’s poor and underserved,” noted Dr. Garcia. “Serving the community is a large part of our mission. We want to expand our programs from the hospital into the surrounding neighborhoods, applying technological advances in imaging to improving healthcare in the Bronx.”

He added, “We’re implementing similar programs to relieve our crowded emergency departments and to improve the quality of our advanced diagnostics and interventional programs at the heart center.”

Dr. Garcia also plans to see patients a few days a week. In particular, he looks forward to the opportunities to educate tomorrow’s cardiologists. The author or co-author of four books, he has begun a project through which he is helping younger cardiologists write a manual for actual emergencies involving echocardiography.

His role as a teacher will not be limited to the Bronx, though. As before his arrival at Einstein and Montefiore, he plans on traveling to the Dominican Republic, Puerto Rico, Mexico and Venezuela – “pretty much everywhere in Latin America” – to give talks and seminars about the latest advances in non-invasive cardiology.

He noted, “All the technologies and applications that we’ve helped to develop have been rapidly adopted throughout Central and South America. We’re very involved in their training and education, and in collaborative research efforts.”

He added, “This work is tremendously rewarding as it represents a considerable contrast to my own medical education in the Dominican Republic during the 1980s, when we were trained to be skillful clinicians, but we didn’t have some of the tools that were necessary to practice modern medicine.”

Completing Dr. Garcia’s medical-science triad will be his research, which will focus on two areas in particular. He explained, “We’re trying to find out why patients with diastolic heart failure have trouble conducting physical exercise, developing shortness of breath, for example. And we’ll examine the role of screening imaging tests for predicting cardiovascular events, such as evaluating the role of computed tomography (CT) in identifying cardiac health risks.”

In conjunction with his arrival at Einstein and Montefiore, Dr. Garcia brings vast experience, success and accolades. His rise to the top of his profession began at the Cleveland Clinic, where he ultimately served as director of echocardiography, leading the conversion of the echo lab from videotape to digital media. Under his direction, the clinic became a leader in abstract presentations and publications in cardiac imaging. “We collaborated to develop the technology that allowed CT coronary angiography and were among the first few centers in the U.S. to validate its application in humans,” he said.

From 2006 until earlier this year, Dr. Garcia was director of cardiovascular imaging at Mount Sinai, where he expanded the cardiac imaging programs (CT, MRI, echo and nuclear) and consolidated them under a single program. “We also developed a system of rapid evaluation and discharge of patients with chest pain at the emergency department, becoming one of the most important referral centers for advanced cardiac imaging in the tri-state area.”