Einstein Hosts Daylong Event on Providing Care to the Homeless

Students from more than a dozen medical schools converged at Albert Einstein College of Medicine on Feb. 24 to learn about how to better provide care for homeless people at a daylong symposium on the topic, organized by the Homeless Outreach Project at Einstein (HOPE). 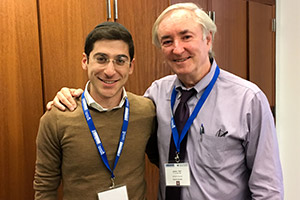 “The burden of homelessness is too great for any one group to bear,” event coordinator Joseph Abraham, a second-year Einstein student, told the crowd of more than 100 people who traveled to the Price Center/Block Pavilion on a rainy, mid-semester Sunday from medical schools along the East Coast, from Maryland to Connecticut.

HOPE Symposium participants included aspiring doctors as well as social workers, physician assistants, nurses, doctors, and administrators from Einstein and Montefiore and agencies across the United States, from Nashville to Boston. “To make any difference, it’s imperative that we reach out and learn to rely on each other so that we can effectively change the world around us,” Mr. Abraham said. 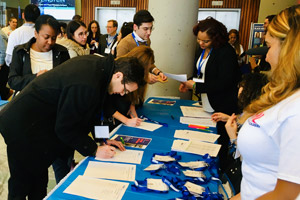 Signing up for the HOPE Symposium at the Price Center.HOPE faculty adviser Andrea Littleton, M.D., medical director of the community organization Bronx Works, and clinical assistant professor of family and social medicine at Einstein and a family physician at Montefiore, served as emcee for the event. The day included featured speakers, sessions where students learned from poverty and homelessness experts, and a question-and-answer panel discussion.

As part of the special event, several student groups presented their success stories and challenges. Four members of Einstein’s HOPE board were among the presenters: second-year students Frank DiRenno, Max Rossberg, and Galila Shapiro, and first-year student and incoming HOPE coordinator Sharon Galperin.

HOPE supports a 24-hour Bronx drop-in center for the homeless called The Living Room as well as an organization, St. Ann’s Corner of Harm Reduction, that connects substance abusers to health resources.  The Einstein students explained that they conduct health education workshops on topics such as hypertension, heart health, diabetes, stress reduction, and mindfulness, and they get to know clients better through activities such as arts and crafts workshops. The students also distribute cooking kits and participate in needle exchange programs.

Seeds for the symposium were sown last September, when Mr. Abraham and other HOPE members reached out to Alicia Martinez, CBSL program manager at Einstein, to see if a one-day event might work. The students already knew other schools were interested, but they needed Einstein’s support to make it a reality. 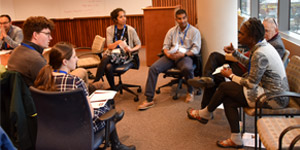 Andrea Littleton, M.D., far right, HOPE faculty adviser, during a breakout session with medical students.Ms. Martinez and Heather Archer-Dyer, CBSL’s director, helped the students come up with a plan of action. “Everyone was committed to the goal,” Ms. Martinez said. “That is, to give voice to the needs of this vulnerable population and bring future practitioners together to share ideas.”

Mrs. Archer-Dyer brought in several community-based service groups, such as BronxWorks, and was able to recruit speakers who work with the homeless as well as people who formerly had been homeless themselves. “We wanted the next generation of physicians to better understand the history of homelessness and the policies that are contributing to this epidemic,” Mrs. Archer-Dyer said. “It’s in direct alignment with Einstein’s longstanding tradition of training physicians dedicated to social justice and advocacy.”

Raising the Alarm on Homelessness

Many of the speakers at the symposium addressed the extent of the problem. On any given night in New York City, about 60,000 people sleep in shelters, said Annabel Palma, New York City deputy commissioner of strategic initiatives in the department of social services, one of the symposium’s presenters. Their placement in neighborhood shelters near support networks is key for their safety and connection to a particular community, Ms. Palma noted.

About 23,000 of those in shelters are children, said George Nashak, another symposium panelist and the executive director of Care for the Homeless, which coordinates healthcare at 23 service sites in New York City where homeless people congregate. 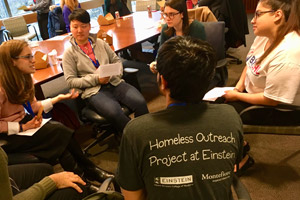 Students from different medical schools share strategies for helping the homeless.Keynote speaker James O’Connell, M.D., president and founding physician of the Boston Health Care for the Homeless Program, said that as a medical resident in Boston in the early 1980s he treated few homeless people. But by the time he was finishing his residency, the emergency department was inundated with homeless patients.

“The idea of following people over time—sticking with people—is something that homeless people really hang on to,” said Dr. O’Connell, who is also assistant professor of medicine at Harvard Medical School. “Their lives are marked by such fragmentation, such loss, that the last thing in the world they want is for someone to spend a week with them and then disappear.”

O’Connell said multidisciplinary outreach teams can help provide better care for the homeless. Their contact with patients doesn’t have to be limited to office or clinic visits, he said, noting that “street medicine,” or providing care directly to homeless people living outdoors, can be effective. “Most of what we do can be done outside or in a fast-food restaurant as long as you have a little privacy,” he said.

Dr. O’Connell added that medical professionals should be aware of the stark medical and health dangers faced by the homeless after they are discharged from hospitals following treatment.  “It’s really tragic what happens to people living on the streets. Their death rate is three times higher than those people who are living in shelters. And the death rate for people living in shelters is already four to five times higher than for people of the same age living in housing.” 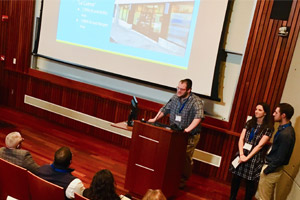 Einstein’s CBSL program is collecting feedback from the event’s participants. “We hope the symposium served as a breeding ground for more collaborative work between student groups and external organizations, possibly even prompting multiple institutional grant efforts,“ Mrs. Archer-Dyer said. She added that she would like to make the event an annual one, offering more opportunities for dialogue, advocacy, and innovation.

“Today’s a day of learning and sharing, but most importantly of planning,” Mr. Abraham told the crowd. “I want you all to leave today energized and with a plan to implement one small change, be it an initiative at your school, a proposal to your local government—something—anything that will mean that we are fighting for our people and letting them know that they are not forgotten.”