Dr. Martin Cohen considers himself a lucky man. He recently retired from a 50-year career at Einstein devoted to two of his great loves: caring for patients and teaching cardiology, activities he considers complementary. 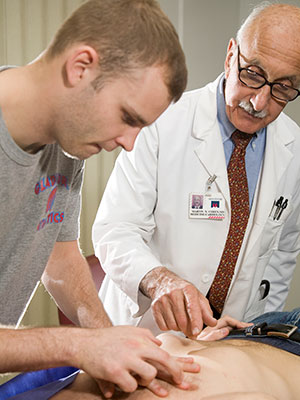 Dr. Cohen guides a student through the examination of a patient“I’m particularly grateful that I’ve been able to help people appreciate cardiac physiology and apply it to patient care,” he said. “I just love that moment in a conference when a student sees the association between the physiology and the case at hand. That’s really a kick. You see the lights turn on!”

Dr. Cohen’s enthusiasm is contagious. Many recall his brilliant solution to a longstanding problem: interpreting subtle differences in heart rhythms. He created an encyclopedia of heartbeats on tape—a unique diagnostic tool.

“Marty’s ability to emblazon the subject matter in a student’s mind was inspirational,” said Dr. Edward Burns, executive dean, who studied with Dr. Cohen more than 40 years ago.

Dr. Sarah Becker, a member of Einstein’s class of 2017 who is now a psychiatry resident at Montefiore, concurred, saying “Dr. Cohen was the epitome of professionalism and clarity. I can still hear him mimicking a murmur.”

The son of a teacher and a lawyer, he grew up in New Jersey. He considered following his father into the law, but realized he was more suited to medicine—a choice he’s never regretted. “It was a good fit from the start,” he said.

After undergraduate studies at Harvard, he attended medical school at Columbia, and then returned to Harvard for his residency and a cardiology fellowship in Boston. He then served in the Army Medical Corps during the Vietnam era, preparing lectures and presenting at conferences.

As an intern at Peter Bent Brigham Hospital in Boston, he was particularly impressed by one of the attendings, Dr. Lewis Dexter, a cardiologist who became his mentor. “I was drawn to cardiology as my own discipline because I felt it had a solid scientific basis for its interventions,” he recalled.

Cardiology has changed enormously over the years, notably, he said, in the increasing use of controlled, randomized trials for interventions and medications. But he never forgot the point of all the research: its application to people. 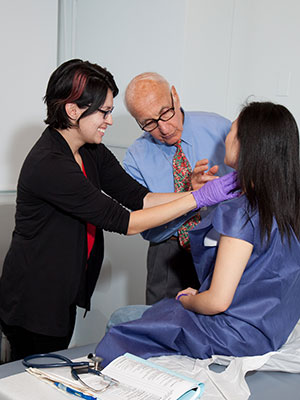 Dr. Cohen instructs a student in checking a patient’s thyroidDr. Cohen embodies a quality Einstein aims to instill in its students: he is a lifelong learner. Time and experience have taught him to see patients in a larger context.

“If you want to find out what is going on,” he said, “listen to what the patient is saying. That will help guide the therapy.”

For example, to ensure patients’ compliance with medication regimens, it’s crucial first to hear their concerns. “If you see a patient in the hospital,” Dr. Cohen added, “it’s tempting to focus on their symptoms at time of admission, but the current medical condition is just one snapshot of his or her whole life.”

Dr. Cohen has been happy to carry on his mentor’s legacy by also teaching students and residents. “The students at Einstein are terrific,” he said. “They’re so quick; they pick up a concept and start applying it almost instantly. That’s very gratifying for a teacher.”

One more reason Dr. Cohen feels fortunate: he’s had the constant support of his wife, Judy, their three children—Steve, a lawyer; Ellen, a Montefiore-trained pediatrician; and Beth, a teacher—and their eight grandchildren. He noted, “I was pleased to have a partner and kids who allowed me to be as crazy as I am, accepting my work hours and all the weekends on call. I’ve been lucky.”

As has Einstein, to have had Dr. Cohen’s many contributions over the years.

What lies ahead? In the near term, a vacation by the ocean, and getting to know his household’s newest addition: a cat named Carly.

But he hasn’t closed the door on teaching. After running the Physical Diagnosis course for decades, he became a preceptor about 15 years ago, and will continue in that role as professor emeritus. When asked why he plans to keep his hand in teaching, his answer is simple: “I love it.”