Over the last few years, Einstein students have traveled to the Universidad Autónoma de Chile (UACh), allowing them to experience how medicine is practiced in another country and culture. 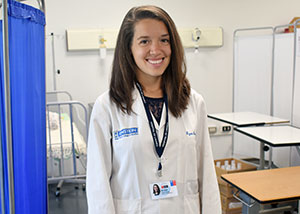 Fourth-year medical student Ryan Arams at the clinic in Talca, Chile“Travel helps us to learn from one another,” said Dr. Matt Anderson, associate professor of clinical family and social medicine at Einstein and an attending physician at Montefiore who offers global health opportunities abroad through his own projects. “Traveling as a medical student is doubly important as it teaches our future doctors the importance of approaching their patients, especially those different from them, with humility and respect.”

Einstein’s Global Health Fellowship Program embodies this perspective, sponsoring nearly 100 students each year. Since the 1970s, it has sent thousands of Einstein students across the globe.

But global health fellowships shouldn’t only benefit the students and their future patients. Faculty and staff at host institutions donate their time and effort, so it’s critical for the experience to be equitable. Now, Einstein is developing a new model for global health fellowships, aimed at creating a sustainable research partnership that will provide meaningful experiences for visiting students and contributing to significant results for host institutions.

“Our goal is to build on the previous fellowship model while also fostering sustainable research projects that benefit everyone involved,” explained Jill Raufman, director of the fellowship program. “This will allow our students and their mentors to address key issues identified by our host.”

Building a Program in Chile 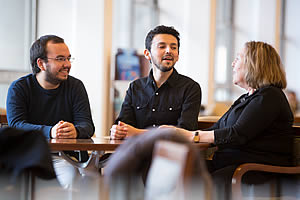 Chilean medical students (from left) José Pablo Muñoz Salas and Juan Ignacio Guerra chat with Jill Raufman in the Einstein CaféEach project will be centered around one of three themes: adolescent reproductive health, the impact of the environment on health, and nutrition and obesity. Students will work with Chilean doctors, as well as with research mentors based at Einstein and Montefiore, to develop rigorous protocols and clinically relevant studies.

“This opportunity arose because of our special relationship with UACh,” said Ms. Raufman. “In the winter of 2015, prior to travelling to Chile for their fellowship, two of our students consulted with the Chilean doctors they would be mentored by, and with our own Dr. Anderson, to discuss their common interests and goals, and to develop a research project that would be meaningful to all of them.”

She continued, “As a group, they decided to do a survey on adolescent reproduction because teen pregnancy is considered a significant issue in Chile that has a lifelong impact, reducing income and education levels for those girls and their children.”

The two Einstein students—Fay Korich (class of ’16) and Melissa Ochoa-Trochez (class of ’17)—worked with the physicians to develop a survey that asked young women who came into the clinic about their knowledge of and attitudes towards contraception. (Einstein and Montefiore’s Institutional Review Board (IRB), which must approve all clinical studies, evaluated and approved the team’s protocol, as did the IRB at UACh.)

Among the team’s most significant findings was that the girls’ relationship with their parents, particularly their mothers, was a critical factor in their use of contraception. The student presented their findings at UACh before they returned to Einstein.

“The physicians and staff appreciated the students’ findings, as it provided evidence to support what they observe in the clinic,” said Ms. Raufman.

While Einstein’s Global Health Fellowship program has been sending Einstein students to Talca, Chile, since 2011, and hosting students from UACh since 2015, the connection has an even longer history.The exchange program is rooted in a friendship between Einstein and Chilean doctor Roberto Belmar, M.D., dating from the early 1970s.

Then the public health director in Santiago, Dr. Belmar fled Chile following the military coup of 1973. Fearing for his life, he sent telegrams to 20 hospitals he had visited in the United States, asking them to send plane tickets for him and his wife. He got one response; Einstein’s then acting dean, Dr. Ernst Jaffé, sent the tickets.

Dr. Belmar obtained political asylum in the U.S., teaching at Einstein while working at Montefiore. Although he returned to Chile in 1985, Dr. Belmar has maintained his connection to Einstein. 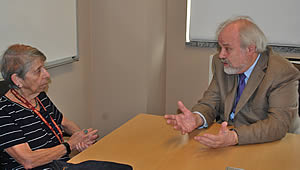 Dr. Jorge Las Heras chats with Einstein’s Dr. Ruth Macklin during a visit to EinsteinThis past winter, Ms. Raufman met with a new group of medical students eager for a global health experience. She suggested that several of them speak with Fay and Melissa about their research and consider continuing their project. The idea took and, in the spring of 2017, three new Einstein students headed to Chile. They developed a new survey given to mothers who came into the clinic with their daughters.

“This was really special to me,” said Marie Boller (class of 2017). “As a medical student, you want to do something helpful and meaningful with your fellowship. By coming up with this topic and survey together, we know we’re doing something great for doctors and patients in Chile, and we’re honing our research skills.”

With this success, Ms. Raufman arranged for fourth-year medical student Ryan Arams to stay in Chile for a year, starting this fall. Two other fourth-year students are lined up to partner with Ryan in January 2018 for two months. Then, in June 2018, two first-year students will join Ryan during their summer fellowships and continue work on the project.

“This will be the first time we’re sending first-year students to Chile, helping to fulfill the model we’ve envisioned with UACh,” said Ms. Raufman. “In preparation for their participation, these students are already interacting with the upperclassmen to learn about the project.”

A Template for Collaboration

“The adolescent reproduction project was a launching point,” said Ms. Raufman. “We, together with faculty at UACH—Drs.Ivonne Moreno and Patricia Leon Ferrada—have since identified environmental factors for health and nutrition and obesity as two other areas of focus that could benefit both institutions and make a difference in the communities we serve.”

To finalize details of the program, she traveled to Chile for a week this past spring. “I’m really excited about how things are developing,” she said. “It’s going to be a truly collaborative and multi-level project, and it embodies practicing what we preach here at Einstein.”

Dr. Siobhan Dolan, professor of obstetrics & gynecology and women’s health at Einstein and attending physician at Montefiore, has agreed to be the research mentor for the reproduction project and other faculty members have expressed interest in taking on more formal mentoring roles for the other topics.

Ms. Raufman also hosted Dr. Jorge Las Heras, dean of the medical college at UACh, during a recent visit to Einstein and Montefiore where further discussions of the collaboration took place. Dr. Las Heras noted, “We’ve had this collaborative program with the exchange of students for some years now, and we’re happy with the results. We’d like to expand our program with Einstein and the opportunities that exist for our students who travel to the Bronx.”

To date, six Chilean students have come to Einstein, with two more expected in February, while nearly two dozen Einstein students have traveled to Talca.

Ms. Raufman foresees the Chilean project becoming a model for other Einstein global health fellowship programs that students pursue around the globe. The goal is to build on projects that already exist and that are useful to the host.

“As the students spend time in each other’s countries, they will learn about research projects that are needed and build on them,” she said.

Toward expanding the concept, Ms. Raufman has also been in contact with officials at a medical school in the Dominican Republic. “They’re thrilled at the idea,” she said, “especially because the Bronx has a high population of Dominicans and the research would be mutually beneficial.”

“It’s an innovative model for student projects,” she noted. “There are so many possibilities.”