Along Einstein’s “Main Street,” a colorful exhibit highlights research by scientists at the College of Medicine’s Rose F. Kennedy Intellectual and Developmental Disabilities Research Center (IDDRC) over its first 50 years, along with research posters detailing current work by center investigators. This special display set the stage for a symposium held Thursday, November 2, in Robbins Auditorium, when Einstein and Montefiore celebrated the center’s 50th anniversary. 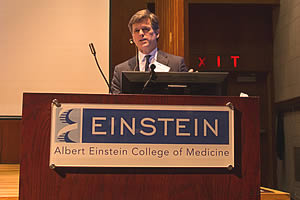 Dr. Timothy Shriver delivers the keynoteIn his welcoming remarks, Dr. Steven Walkley, director of the center, noted, “The IDDRC has a remarkable and inspiring story.” It began in 1961, when President John F. Kennedy compelled the nation to do something about intellectual and developmental disability (IDD). During the next year, the investigative panel established by the president reported its findings. And almost simultaneously, the president’s sister, Eunice Kennedy Shriver, revealed for the first time that their sister Rosemary Kennedy had intellectual disability.

Soon after these events, Congress passed legislation establishing the National Institute of Child Health and Human Development (NICHD) as well as a network of 12 IDD research centers around the country, including one at Einstein. On May 1, 1966, Rose Kennedy and son Robert broke ground for the Rose F. Kennedy Center for Research in Mental Retardation and Human Development, now the Rose F. Kennedy IDDRC. Thanks to near-continuous funding by the NICHD, Einstein researchers achieved many advances over these past decades, with examples depicted in the “Main Street” panels and the accompanying poster session.

Looking to the Future 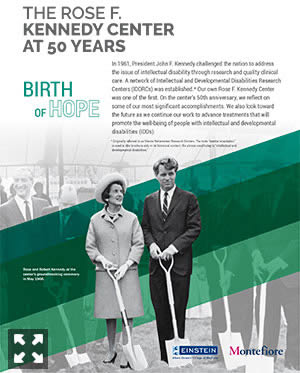 Click here to view event brochureThe afternoon symposium was the day’s headline event, attended by more than 100 members of the Einstein-Montefiore community. It featured IDD scientists from other institutions whose work is reflective of collaborations with Einstein investigators. Dr. Timothy Shriver, chair of the Special Olympics, gave the keynote address, discussing what he termed the “inclusion revolution.”

A grandson of Rose F. Kennedy and a son of Eunice Kennedy Shriver, Dr. Shriver stressed the importance of meeting the needs of people with intellectual disabilities by overturning injustice and disparities, and changing long-held attitudes concerning the abilities of individuals with IDDs.

Among the event’s other speakers were: 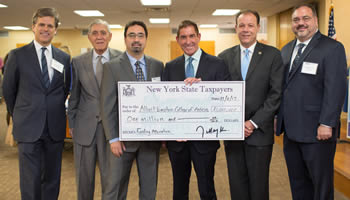 From left to right: Dr. Tim Shriver, Dr. Allen M. Spiegel, Dr. Kamran Khodakhah, Sen. Jeff Klein, Assemblyman Mark Gjonaj, Salvatore CiampoAt a luncheon preceding the symposium, New York State Senator Jeffrey Klein presented a check for $1 million that will support renovations to the Kennedy Center. Other honored guests at the private event included Dr. Ruth Gottesman, chair emeritus of the Einstein Board of Trustees, and Dr. Melissa Parisi, chief of the IDD Branch at NICHD, who gave the luncheon keynote. Congressman Joseph P. Kennedy III (D-MA), great-grandson of Rose F. Kennedy, sent a videotaped statement marking the occasion. He was joined by Congressman Joseph Crowley (D-NY), who represents the district in which both Einstein and Montefiore are located.

Following the symposium, attendees gathered at a reception on “Main Street” to view the 11-panel, 41-foot display detailing the history of the Rose F. Kennedy IDDRC. It will remain in place until January 1, 2018.