When she was in high school, Samantha “Sammy” Chalmers fell ill, and it took nearly six months for doctors to diagnose that an autoimmune disease was at the root of her health problems. Although Sammy was frustrated by the lack of understanding about her disease and how difficult it was to determine what was wrong, it sparked an interest in medicine that ultimately led her to pursue a Ph.D. at Einstein. This past May, Sammy was among the graduates who crossed the stage at David Geffen Hall to be hooded and receive their diplomas. She now continues her research as a postdoctoral fellow. 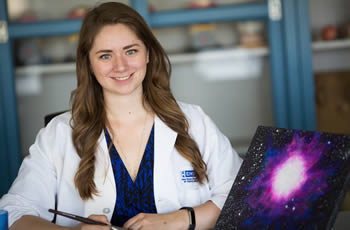 Sammy Chalmers, Ph.D., with a work of hers in which art imitates scienceAt Einstein, Sammy’s thesis research focused on lupus nephritis, a complication specific to the kidney that is found in individuals who have the autoimmune disease systemic lupus erythematosus. She studied how macrophages, a major component of the immune system, contribute to this disease.

Sammy’s own personal experiences with autoimmune diseases have played a substantial role in her trajectory through the world of biomedical research, and motivate her to persevere through challenges in the lab.

She noted, “My knowledge of autoimmune diseases helps me keep perspective. When I’m in the lab and experiments aren’t going well, I remind myself that there is a larger question to be answered.”

Insights from a Loving Mentor

Sammy credits another event from her youth for informing her passion for biomedical science. An avid athlete, she tore a muscle in her back and was sidelined for a while. As she recuperated from the injury at her grandparents’ house, her grandfather, a dentist, showed Sammy diagrams of the affected muscles in an anatomy book. He taught her which muscle she had injured, along with how it worked, and explained why certain treatments could help the healing process. 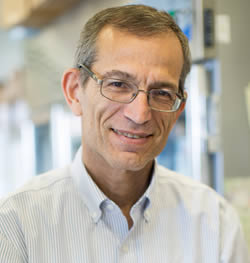 Sammy’s mentor, Chaim Putterman, M.D.“I think that was the day I knew science was my calling,” she said. “I completely fell in love with the subject matter.”

Her grandfather continues to be an important role model to her. “I see his calm demeanor, his accomplishments and his confidence, and I hope to emulate them.”

As her studies continued and her passion for scientific research grew, Sammy took part in Einstein’s Summer Undergraduate Research Program, which matches college students with a faculty mentor over six weeks during summer break. Sammy was paired with Dr. Chaim Putterman, professor of medicine and of microbiology & immunology at Einstein, and chief of the division of rheumatology at Montefiore and Einstein whose research centers on lupus.

“My interests in immunology and autoimmune diseases made Dr. Putterman an excellent mentor for me,” she said. Ultimately, she decided to pursue her Ph.D. at Einstein, in Dr. Putterman’s lab, influenced by her positive experiences as an undergraduate.

A Discovery Outside of the Lab 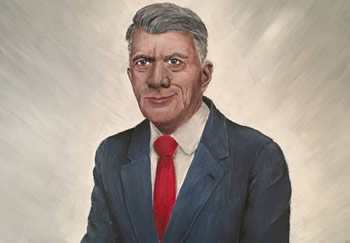 Sammy painted this portrait of her grandfather for her grandmother after he passed awayAs a respite from long days of experiments in the lab, Sammy often turned to her love of art. Although she had always enjoyed sketching, she decided to try her hand at painting.

“I found that the feel of the paintbrush in my hand and the colors of the acrylic paints I used, brought me an intrinsic feeling of calm,” she said.

She added, “Painting allows me to access a creative ‘non-logical’ side that can often fall by the wayside while doing academic research. There’s a creative side to science—in the need to think outside of the box to advance a project, for example. Painting helps me tap into that.”

Sammy has painted a number of works for people at Einstein, and her art has appeared in Ad Libitum, Einstein’s art and literary magazine.

Her passion for art also informs her appreciation of the science she pursues. “In viewing immunofluorescence microscopy, I’m often struck by the vivid colors within cellular components, which appear to be ‘painted’ with a fluorescent molecule,” she observed. “I hope to incorporate some of these aesthetics into my future work.”

With her postdoctoral efforts on some projects showing promise, Sammy continues to find her bench work appealing. “I feel a sense of connection to the lab and to the community at Einstein,” she said.