Can we hack the Fountain of Youth?

Students, faculty, and staff tackled the question in earnest late last month, hunching over computers and pouring through data for more than 30 hours at Einstein’s first-ever hackathon, focused on the science of aging. The Graduate Division of Biomedical Research sponsored the inaugural event, which was funded by the National Institutes of Health and designed to sharpen skills in creating reproducible and rigorous research. 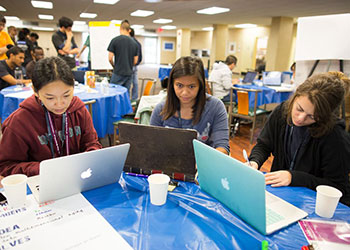 Nine teams worked around the clock, intently focused on developing an app or website addressing an issue connected to aging research“A lack of reproducibility of major studies in biomedical science has been a growing concern, with recent high-profile examples occurring in cancer genomics and pharmacology,” noted hackathon organizer Jessica Mar, Ph.D., assistant professor of systems & computational biology, in a recent blog post. “There is a consensus that increased attention to computer-programming skills, data analysis and effective communication across interdisciplinary teams would bolster the quality of scientific research.”

She added, “It’s intimidating and scary to sign up for a two-day event where you’ll work long hours with people you may not know, but the benefits are huge, especially for research skills, and people really stepped up to the challenge in a big way.”

In the weeks before the round-the-clock collaboration event, participants attended workshops on statistical analysis, programming, and studies conducted at Einstein’s Institute for Aging Research. The hackathon formally kicked off on July 24 with a panel of experts in aging research, moderated by Paul Marantz, M.D., M.P.H., associate dean for clinical research education.

“The next frontier is trying to target aging with therapeutic drugs to see if we can combat all age-related diseases simultaneously,” said panelist Sofiya Milman, M.D., assistant professor of medicine. “There’s chronological aging and there’s biological aging, and we all know people in their 70s and 80s with no diseases. Can we stall biological processes associated with aging so we can delay the onset of disease and extend our health span?”

Helena Blumen, Ph.D., assistant professor of medicine and in the Saul R. Korey Department of Neurology, and Xiao Dong, Ph.D., postdoctoral fellow in Dr. Jan Vijg’s lab, also served on the panel. Both agreed on the need for teamwork, respect among researchers and the benefits of a multidisciplinary approach to generate and analyze data for solutions to research questions. 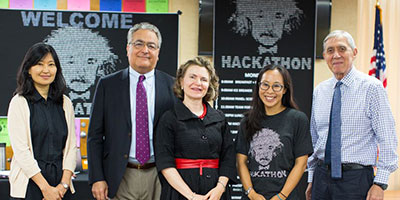 Dr. Jess Mar (second from right) with the hackathon judges, Drs. Mimi Kim, Harry Shamoon, Meredith Hawkins and Allen SpiegelWith coffee cups, water bottles and printouts littering their tables, teams brainstormed projects, scrolling furiously on laptops, digging through public datasets and writing code for their apps or websites. Through lunch and dinner, they focused on defining problems in the field of aging research and devising creative solutions. Some even conferred via Skype with experts in Australia and Japan who, as research colleagues of Dr. Mar, enthusiastically agreed to serve as mentors after she told them about the event.

The winning team, BioAge, created a website that predicts a user’s biological age based on information from the RNA in their blood. The runner-up, team WDUCS, created “CareCo,” an app to help seniors better coordinate medical appointments and strengthen their social networks to improve their quality of life. Team AARB won third place with a map of New York City’s zip codes showing how variables like income, transportation or air quality affect how long a person lives.

Other teams examined the characteristics in animals that determine their longevity, how an individual’s cholesterol and blood pressure compares to others in the same age range; and the role of the bacteria clostridia in aging populations.

Although each group was required to have at least one member proficient in coding, many of the participants had limited experience working in data science. 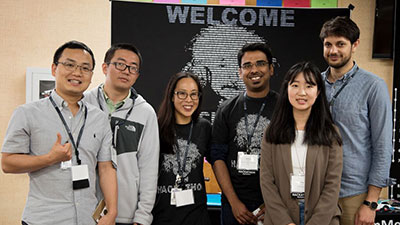 Dr. Jess Mar (center) with members of the winning team, BioAge (from left): Zuen Ren (Ph.D. student), Dr. Yang Liu (postdoc), Ameya Kulkarni (Ph.D. student), Yu Liu (Ph.D. student) and Wesam Azaizeh (Ph.D. student)“I thought this would be a good chance for me to dip my toes in,” said Mahfuz Miah, a fourth-year Ph.D. candidate in Dr. Michael Aschner’s lab. “There’s so many datasets out there and you can have fun with them, asking questions and analyzing, but only if you have the ability. This has inspired me to learn more of these programming languages and get these skills under my belt.”

“Working with data on this scale is becoming the norm in science so this was a cool opportunity for people who don’t necessarily think like this every day to do it for a day-and-a-half and get the experience,” added Alyssa Casill, a Ph.D. candidate in Dr. Matthew Gamble’s lab.

Some participants were frustrated that the ideal dataset they were looking for didn’t exist, but others found it difficult to focus their projects because of the large amount of publicly available data.

“It’s getting easier to generate data but it’s getting more challenging to analyze all of it and to learn the process of analyzing the data responsibly. I think it’s going to be an important skill to have in the biomedical science enterprise,” said Josh Mayoral, a fourth-year student in Einstein’s Medical Scientist Training Program.

Aviv Bergman, Ph.D., chair of systems & computational biology, said he welcomed events like the hackathon where students can better familiarize themselves with data science.

“There is this old saying that data is not information, information is not knowledge, knowledge is not understanding, and understanding is not wisdom,” said Dr. Bergman. “This event is a step in that direction, to take data and make good of it.”

Dr. Mar said colleagues who helped serve as mentors during the hackathon have already approached her with ideas for the next one. “It was wonderful, and I’m so proud of everyone from our Einstein community who participated and helped make this event such a giant success,” she added. “I’d do it again next week if I had the time,” she joked.