For nearly 50 years, Dr. Stephen G. Baum has been an important figure at Einstein, and a highly respected mentor, colleague, physician, administrator, advisor and friend to many. He arrived as a young physician-scientist just as the College of Medicine was entering its own “early adulthood” of 13 years in existence. The young doctor and young medical institution matured together. As he shifts roles—yet again—from senior associate dean for student affairs to senior advisor for students, we spoke with the avuncular Dr. Baum about his time at Einstein, to get the kaleidoscope view that his myriad roles at the College of Medicine have afforded him. 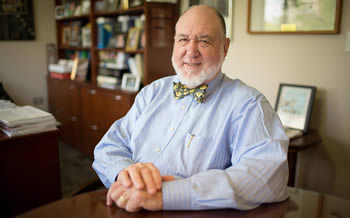 Stephen Baum, M.D.Q: You joined the Einstein faculty as a research associate in 1968, just as Einstein entered its 13th year. What were your initial impressions of your new workplace?

A: Einstein was a very welcoming place. Although there was no infectious diseases division in the department of medicine in those days, Einstein was a world Mecca for virology—and I was a virologist. There were at least a dozen eminent virologists doing seminal work under the aegis of Dr. Harry Eagle—the person who formulated Eagle’s “media,” so important in the use of tissue culture techniques. The department of medicine, on the sixth floor of Ullmann was chaired by Irving London, an esteemed hematologist, who had one department administrator and who met with all of us for lunch each day in the sixth floor library. All of us attended in medicine at Jacobi, which was our primary teaching hospital at the time. If you were well trained, and had an interesting research idea, you were pretty sure to get your first RO1 grant from the NIH.

Q: You were among the original chiefs of the department of medicine’s division of infectious diseases. While in recent years Ebola and Zika have been in the headlines, what were the infectious diseases of gravest concern for you and your colleagues then?

A: Those were the days before AIDS and before Lyme. We were dealing with the basics: pneumonia, endocarditis, urinary and post-surgical infections. These have not gone away, but have been with a plethora of emerging infectious diseases and increases in fungal diseases because of the use (misuse) of antibiotics, and the iatrogenic immunodeficiencies created by chemotherapy.

Q: You also served as the director of Einstein’s Medical Scientist Training Program, which was one of the first established with funding from the NIH. What did you see as the greatest challenges in helping to shape physician-scientists of the future? How does that compare with the challenges we face today?

A: Einstein was one of the first three Medical Scientist Training Programs in the U.S. In those days, it was one of the routes to physicians becoming scientists as well. There were other routes, such as subspecialty fellowship programs like the one I entered at the NIH. Now, pretty much the only physicians who have a chance at becoming real scientists are those who go through an MSTP. Then, as now, among the big challenges was how to keep one’s edge in science while going through a prolonged residency training program. By the time residency was completed, advances in your research field had progressed in new directions, requiring a lot of time and work to get up to speed with new developments and knowledge. Research residency tracks were designed with that problem in mind. Now, the biggest challenge is getting funded once training is finished. It’s important to choose carefully to match one’s clinical field with research focus to optimize success at both. 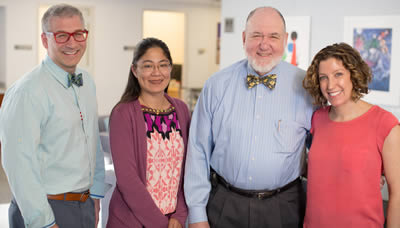 Dr. Baum with his colleagues in student affairs, from left, Dr. Joshua Nosanchuk (now senior associate dean for medical education), Christina Chin (director for the office of student affairs) and Dr. Allison Ludwig (now associate dean for student affairs)Q: As you know, when Einstein was established, the concept of bench-to-bed/bed-to-bench research—or what we now call translational medicine—was strongly encouraged by some founding faculty, such as Irving London and Saul Korey. How has this “best practice” as it is promoted now beneficial to today’s young physician-scientists and the patients they serve?

A: Finding a way to be both clinically and scientifically productive is to find a niche where the two come together as closely as possible.

Q: You also served as the director of the office of graduate education at Einstein. At that time, jobs in academia were easier to come by for Ph.D. graduates. What do you see as contributing factors to the changes that have occurred with regard to competition/available positions within academia? What were some of the challenges faced by graduates during your leadership of the program?

Q: In 1987, you moved to Beth Israel Medical Center to chair its department of medicine. While there, you were instrumental in Beth Israel becoming an Einstein-affiliated hospital in 1994. What are the key things one aims to impart to students during clerkship?

A: First and foremost is the idea that what you do and don’t do now has implications beyond yourself. There are implications for your colleagues—whatever you don’t do, someone else must do; and there are implications, of course, for your patients. Lives depend on you: on your knowledge, on your professionalism, and on your sense of responsibility.

Q: How have clerkships changed since your own medical education?

A: The biggest change, I think, is the move toward the use of hospitalists as the primary teaching attendings. While many of them are smart and excellent, they are also busy with a primary focus of decreasing a patient’s length of stay. The positive aspect of this is that they are more available. The negative one is that they are often occupied with urgent, but not necessarily academic pursuits.

Q: In 2007, you returned to the Bronx as dean for student affairs at Einstein. What are the challenges you’ve noticed over the past decade while guiding Einstein students along their journey through medical school and into residency?

A: These are pretty much as they have been: encouraging the best students to reach their highest potential and to help those with academic or psychological difficulties. I think we do a super nurturing job at Einstein and our graduates, overwhelmingly, are respected in their residencies.

Q: Match Day is among the most exciting (and nerve-wracking) days in a medical student’s life. What’s it like for you?

A: As I said to someone at Match Day this year, it’s like Ground Hog Day for parenthood. Each year it’s the same joyous event for your “children," but each year is a bit different and wonderful in its own right.

Q: What are you most proud of when you look at each year’s crop of graduates and what they’ve accomplished?

A: That for most of them, this is a culmination of all their hard work, coupled with a totally understandable apprehension for what is to come. We know that the vast majority of our graduates will rise to the top of the residency cadre and that we have trained them well.

Q: What have been the most rewarding aspects of your many roles at Einstein?

A: It’s quite selfish, but it’s the tremendous gratification of believing that I have made a positive contribution to the training of so many students and continuing to receive, after many years, correspondence from those I have grown closest to, informing me of their progress in medicine as well as in their private lives. Each one of these communications “makes my day.”

Q: How has medical practice changed from when you got your own M.D.? And what has remained the same?

A: Almost everything, except the joy at diagnosing and correcting when possible, a patient’s illness.