Home > Features > Eddie Degerman: From the Minor Leagues to Medicine

Eddie Degerman: From the Minor Leagues to Medicine

Spring is an eventful season for graduates. And it has long been a special time for Einstein medical student Eddie Degerman, class of 2017, who pursued a career in medicine after first following another dream—a career in baseball. 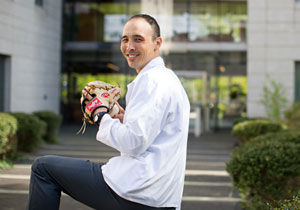 Eddie Degerman will make his pitch in the field of physical medicine and rehabilitationTuesday, May 23, 2017, marked the culmination of Eddie’s long, indirect path to becoming a doctor, as he crossed the stage at Lincoln Center’s David Geffen Hall with his young daughter Kennedy in his arms to accept his hard-earned diploma from Einstein. Come July, he will begin the next leg of his journey: honing his skills as a specialist in physical medicine and rehabilitation (PM&R).

If commencement is “opening day” for doctors, then Match Day marks the close of spring training, when players learn if they’re headed to the major leagues. Match Day, when fourth-year medical students find out where they will complete their medical training, proved to be a great day for Eddie and his family; he learned he will enter a one-year internship in medicine at Montefiore/New Rochelle, followed by residency in PM&R at Hofstra Northwell School of Medicine.

“While both baseball and medical school have arduous aspects to them, I’m thrilled to be one step closer to becoming a practicing doctor,” he said. “It’s the only thing I’ve wanted to be other than a baseball player.”

A Major Change in Prospects

For Eddie, the 2017 Match Day was the polar opposite of July 4, 2009. By that date, the top pitching prospect had played three seasons of minor league baseball with the St. Louis Cardinals organization. He was accustomed to living on the road and staying in cheap motels across the country while trying to make it to “the show.”

On that hot Independence Day, the 6-foot-4 right-hander stood on the mound in Springfield, Missouri after walking six batters in a row. The packed house of fans mockingly cheered every time he threw a strike.

“I was struggling,” he recalled. “And the harder I fought to control my pitches, the worse things got. I remember sitting in the dugout after getting pulled, and it was the loneliest feeling in the world.”

Soon after, he was released and his baseball career was over.

Finding His Way to Medicine

Until that point, baseball was Eddie’s life. He learned his curveball at age 10 and later developed a deceiving delivery that fooled batters. He pitched in the College World Series for Rice University. In 2006, he was a finalist for the Roger Clemens Award with future major league all-stars Tim Lincecum and Andrew Miller, and was drafted in the fourth round by St. Louis.

“When I was released, I didn’t know what I wanted to do other than baseball,” he said. Initially, he got a position substitute teaching at his old high school in Granada Hills, California.

“The year 2009 was a tough one for my family. Before my last season with the Cards started, my father died following a battle with pancreatic cancer. One thing that made an impression on me was how the doctors had taken such great care of him.”

He continued, “Because of his prognosis, my dad’s primary care doctor couldn’t do much medically, but she was so compassionate and gentle. I thought to myself, ‘This is really important.’ The way they all treated my father stuck with me.”

As he considered his options after baseball, he realized he wanted to help people. And he determined he could do that by becoming a doctor.

“Other than baseball, it was the first time in my life that I knew what I wanted to do. It was a great feeling.”

Having absolutely no idea how to pursue a career in medicine, he bought the book How to Get into Medical School. Since his degree from Rice was in economics, he enrolled at the University of Southern California to take the required science classes.

When he got into Einstein, he recalls being nervous. “Everything was so new. It was a whole new world,” he recalled. But he found that his time as a baseball player provided him with valuable experience he could draw on.

“I’d be taking a multiple-choice test and having a good run early, marking each answer, and I’d tell myself, ‘OK you can’t get too excited, keep focused,’” he said. “It’s like pitching. If you’re doing well and cruising through a game, you can’t get complacent. You still have to get the last out.” 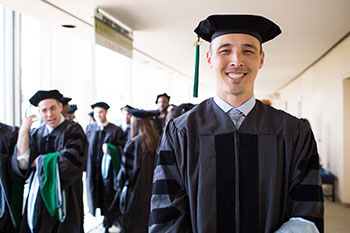 Edward Degerman, M.D.While he didn’t decide which medical field to pursue until an elective in PM&R during fourth year, he feels the field is a good fit for him. “I appreciate the functionality of what we do to treat patients, and the focus on helping them achieve goals. That’s something I can relate to and understand.”

“Eddie offers a sense of altruism that is pretty rare,” noted Dr. Mark Thomas, associate professor of PM&R at Einstein and an attending physician at Montefiore, who served as Eddie’s mentor. “He wants what the patient wants for themselves.”

“His background in baseball certainly offers invaluable experience that gives him an edge,” added Dr. Stephanie Rand, another mentor who is assistant professor of PM&R at Einstein and an attending physician at Montefiore. “Since childhood, Eddie’s had experience with the mechanics of the human body and physiology without even intending to learn it.”

Eddie doesn’t know yet whether he will ultimately specialize in sports medicine. “For now, my priority is to concentrate on helping patients,” he said.

Asked if he misses playing baseball for a living, he shook his head and then smiled. “Sometimes I’ll be watching a game and I’ll miss being up on the mound and that competitive drive that comes with being part of a team. But I can try to use that in my efforts to help patients now.”