Editor’s Note: On May 24, 2017, the Einstein community learned it had lost one of its giants. Isabelle Rapin, M.D., professor emerita in the Saul R. Korey Department of Neurology and of pediatrics at Einstein and a neurologist at Montefiore, passed away following a bout with pneumonia. She was 89. Following is an updated version of a story that first appeared on our website in 2012, when the College of Medicine established the annual Isabelle Rapin Conference on Communication Disorders. 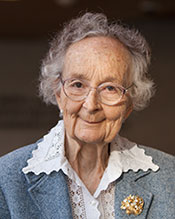 Isabelle Rapin, M.D.Of her many contributions to the fields of neurology and pediatrics, Dr. Isabelle Rapin took great pride in her work with basic scientists to seek greater clues to the underpinnings of the neurologic disorders that she diagnosed and studied in patients for nearly 60 years. She also cherished her clinical work with those patients and their families, treating them, learning from them and offering guidance on managing issues that often span a patient’s lifetime. But the pinnacle, the achievement of which she was most proud, was her teaching.

A member of the Einstein faculty since 1958, Dr. Rapin—who “officially” retired in 2012, but continued her academic pursuits and other scholarly activities—was a singular mentor to countless colleagues, residents and students at the College of Medicine and beyond. As a leader in the field of child neurology, she is credited with a number of discoveries in the field of neurogenetic disorders in childhood, including shaping our understanding of autism—a disorder whose complexity is described as a spectrum of related disorders. In addition to her renown as a pioneer in addressing the plight of individuals with autism, she was often referred to as “a luminary in her field” and “always the guiding light.”

“Isabelle was responsible for perpetuating Saul R. Korey’s unique model for neurology that we have at Einstein, but which, operationally, doesn’t exist elsewhere,” said Dr. Mark Mehler, who knew Dr. Rapin since his days as an Einstein student and is now professor and chair of neurology at Einstein and Montefiore, as well as the Alpern Family Foundation Chair in Cerebral Palsy Research and director of Einstein’s Institute for Brain Disorders and Neural Regeneration. “She was a seminal influence in characterizing neurologic disorders as ‘lifespan disorders,’ which start at conception, extend throughout adult life and need to be addressed throughout a patient’s life. She also was a star clinician and teacher whose scholarly mentorship extended beyond students, postdoctoral fellows and faculty to include caregivers, families and the general public.”

In recognition of her distinctive authority, in 2012 Einstein created an annual conference in Dr. Rapin’s honor, focused on communication disorders. To date, topics have included recent advances in research of Williams Syndrome, dyslexia, Rett syndrome, and tuberous sclerosis.

“Each year’s conference is designed to bring together scientists and clinicians at Einstein, to both raise their awareness of various communication disorders and to encourage collaboration toward identifying possible causes and treatments,” noted Dr. Steve Walkley, director of Einstein’s Rose F. Kennedy Intellectual and Developmental Disabilities Research Center, which hosts the conference. 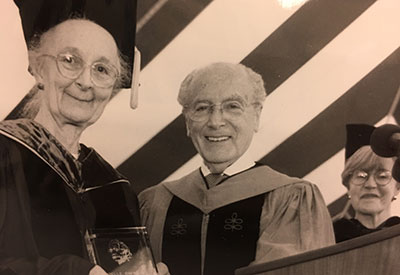 Dr. Rapin receiving the alumni association’s Honorary Alumnus Award at commencement“Isabelle was doing translational research more than 50 years ago, before anyone had coined a term for it or knew what it meant,” noted Dr. Mehler. “Influenced by Saul Korey, Dom Purpura and Bob Katzman, she taught all of us who followed the importance of bringing science into our understanding and treatment of disorders. She was the world’s expert in the field of pediatric communication disorders, and during her career she defined as well as refined our understanding of an entire field.”

The conference represents one of a multitude of honors bestowed upon Dr. Rapin throughout her career. These included the American Academy of Neurology’s President’s Award, a prestigious award given annually to a leader in the field of neurology, and receiving Honorary Alumna status at the College of Medicine, which also hosted an international symposium on autism in her honor in 2006. To commemorate her mentorship contributions, the department of neurology also established the Rapin Award, which is given annually to neurology trainees with distinguished scholarly activities that most embody her spirit of biomedical inquiry and distinction.

A Lifelong Love of Learning

A founding member of both the Child Neurology Society and the International Child Neurology Association, Dr. Rapin’s many accomplishments in the scientific realm reflect her lifelong passion for science. As a child growing up in Switzerland, she became fascinated by science and determined she would one day become a doctor. Her unique determination and ability to fully immerse herself in her field were clear by age 10, when she understood active versus passive immunization.

The nervous system fascinated her when she attended the University of Lausanne Medical School, but it was during a rotation in a Paris hospital that she was introduced to child neurology, prompting her to come to the United States to fulfill her dream. She was accepted as an intern in pediatrics at Bellevue Hospital, in New York City, followed by a neurology residency and year of fellowship at the Neurological Institute at Columbia-Presbyterian Hospital.

It was during her residency that Dr. Rapin first met her eventual Einstein colleague, Dr. Dominick P. Purpura, distinguished professor emeritus of the Dominick P. Purpura Department of Neuroscience and former Einstein dean. As Dr. Purpura recalled, “We were each busily reading charts in a room at the Neurological Institute when we struck up a conversation. That led to a fast friendship through which we could bounce ideas off one another and discuss our patients.”

It was clear to Dr. Purpura from their first encounter that Dr. Rapin stood out. “I always felt that Isabelle knew so much more than the average resident, and I considered myself to be an average resident!” he said. “Even then, she was already displaying strong leadership qualities.”

Following her residency, Dr. Rapin was hired by Dr. Korey (Einstein’s founding chair of neurology) for a faculty position at the nascent College of Medicine. Her interest in clinical research, which began during her residency, continued at Einstein. She always believed that patients can offer important clues to biology with dramatic and exhilarating effects when science helps the understanding of the underlying disease process. 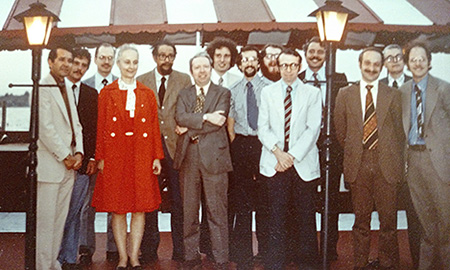 In 1976, Dr. Rapin was the only female physician in the pediatric neurology division. Now, approximately 60 percent of the department’s faculty are women, many of whom were influenced by her example.In 1959, she obtained her first National Institutes of Health grant, spurring a long and prolific research career that produced more than 250 papers, books and book chapters on topics that range from lysosomal diseases to hearing loss and language and communication disorders.

“Isabelle’s research contributions have changed our understanding of many different fields within neurology,” said Dr. Solomon Moshé, director of clinical neurophysiology and of the division of pediatric neurology at Montefiore, as well as vice chair and professor of neurology and professor of neuroscience Einstein. “And, she conducted pioneering work in metabolic diseases of the brain, including lysosomal disorders.” Her most recent publication, “The autism “epidemic”: Ethical, legal, and social issues in a developmental spectrum disorder,” published in Neurology’s “News & Views” section on May 18, 2017.

Dr. Rapin’s influence is also evidenced by her academic contributions at Einstein. She founded and initially led the Child Neurology Service and Fellowship Training Program, through which she trained generations of successful adult and child neurologists. (This included her daughter, Dr. Anne Louise Oaklander, who earned an M.D.-Ph.D. degree at Einstein and is a leading pain neurologist at Massachusetts General Hospital.)

“The program that Isabelle created was one of the first in the country, and has an international reputation for excellence,” noted its current director, Dr. Moshé, who also holds the Charles Frost Chair in Neurosurgery and Neurology. “Many of our graduates originally trained at Einstein because of Isabelle, and have gone on to create their own successful programs. Almost everything happening in this field, worldwide, can be linked back to her in some way.”

Consistently admired for her clinical and scientific accomplishments throughout her illustrious career, Dr. Rapin continued to impress her colleagues and friends with her enthusiasm for learning and her eagerness to share knowledge as recently as this year.

“I always went to Isabelle with any clinical questions, any questions about mechanisms of causation, and about the latest theories,” said Dr. Purpura. “She was a tremendous source of good information and understanding. With her perseverance and synthetic mind, which was able to put her knowledge of clinical, behavioral and scientific research together, she could take in the little leaves, the trees and the forest. That’s an unusual and powerful combination of skills.”

Dr. Moshé, who considered Dr. Rapin to be one of his mentors, agreed. “Isabelle taught you and then encouraged you to develop your own perspectives while remaining available to help. She was always the one we would go to with a difficult case, and somehow she was always correct with the diagnosis.”

Although she retired in 2012, Dr. Rapin continued to keep current with the research and clinical advances in her field. Ever the mentor, available to colleagues and patients alike, she often noted, “Every patient can teach us something we don’t know. Patients are our teachers.”