Einstein is an institution based in science, but members of the community are also dedicated to celebrating their artistic sides. Ad Libitum, a club founded to raise awareness of and celebrate the bonds between art, medicine and science, toasted the artistic endeavors of the College of Medicine’s students, faculty, staff and friends at its annual Arts and Literary Night, held on January 18, in Lubin Dining Hall. Members of the Einstein community enjoyed the paintings, drawings and photographs on display, as well as readings of original poetry, essays and fiction, while live jazz music provided an art-gallery atmosphere. 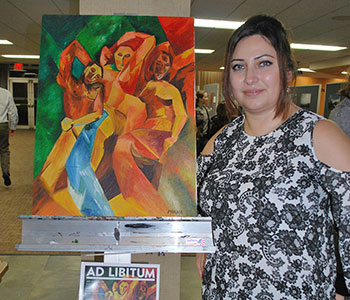 Mirna Jaber shows off one of several paintings she had on display; this piece has graced the cover of Ad LibitumThe event was organized by third-year Ph.D. students Basia Galinski and Yves Juste. The two are co-leaders of the Ad Libitum Club and co-editors-in-chief of Ad Libitum, Einstein’s art and literary magazine, which will release its 15th issue during spring 2017. Among the art on display was a black and white portrait of Albert Einstein painted by Dr. Ellen Grober, clinical professor of neurology. The piece originated from a project Dr. Grober did for an art class she attends. The assignment—to create a black and white portrait—was given on the 33rd anniversary of Dr. Grober’s employment at Einstein, making her choice of subject a perfect way to mark the occasion.

She said, “I use art as a form of meditation and take classes once a week. It started because I wanted to improve my anatomy drawing. I encourage students to do the same and not to feel disheartened by more experienced artists.”

A Platform for Sharing Art

Professional artist Mirna Jaber, whose husband Luc is a postdoc in Dr. Sanjeev Gupta’s lab, praised Dr. Grober’s artwork. “It has accurate dimensions and good contrast of shade and light,” said Ms. Jaber, who displayed some of her oil paintings. Her reproduction of Picasso’s “Three Women” was featured on the cover of Ad Libitum in 2016.

Dr. Jayanta Roy-Chowdhury, professor of medicine and of genetics, was also among the 50 visual artists present, and is a perennial contributor to the magazine as well. He showcased some of his latest nature photographs, including images from a trip he recently took to Antarctica.

“This event is something to be proud of and I’m happy to be a part of it every year,” he said.

Adriana Nieto, an administrative secretary and coordinator for the family and social medicine clerkship, had both drawings and photographs on display, and regularly submits her art to appear in Ad Libitum. “I studied art before coming to Einstein and was a volunteer at the Children’s Hospital at Montefiore for several years, using art therapy to aid patients’ recovery,” she said. “This event is an amazing effort by the students to celebrate the arts at Einstein.”

Writing that Reflects Research and Medicine 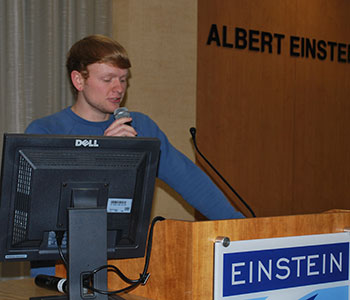 Medical student Keith Sellers shares a moving tribute to a special teacherScience was the main theme in the spoken word portion of the evening, which included readings by Dr. Sylvia Smoller, medical student Keith Sellers and graduate student Kyle Jensen. Dr. Smoller, professor emerita of epidemiology & population health, read an abecedarian poem—in which each line begins using the letters of the alphabet, from A to Z. “I enjoy the creative process behind this kind of writing because it doesn’t follow rules like a scientific paper,” she said.

Mr. Sellers shared a moving piece written to the individual who had donated her body to the first-year anatomy course that he will soon complete, while Mr. Jensen shared an excerpt from his recently self-published novel, An Evolution of Men.

To close the evening, those in attendance enjoyed song stylings by Einstein's a cappella singing group, the Lymph Notes.

A silent auction—the sixth held in conjunction with the event—raised nearly $850 to benefit the nonprofit Bronx River Art Center (BRAC). Dr. Zachary Katz, now an alumnus of the graduate program, initiated the special partnership after taking a ceramics course at BRAC. The funds raised support youngsters from the Bronx taking classes at the center.

Gail Nathan, BRAC’s executive director who attended the event with arts advisor Laura James and interns Madeline Prachar and Calvin Coke, observed, “The work on display here is impressive and illustrates that the two worlds of science and the arts are not isolated.”

(To view slideshow of photo gallery, click on an image below; then move your mouse over the left or right margins to navigate.)