What motivates a doctor to devote his career to improving outcomes for women with cancer? 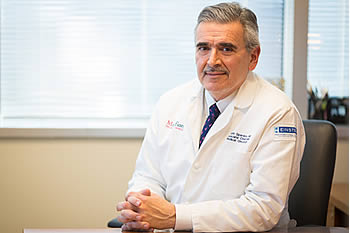 Joseph Sparano, M.D.For Joseph A. Sparano, M.D., the inspiration came from his grandmother, who died of breast cancer during his childhood. “I have very vivid memories of her and what she endured. That's what drove me to pursue medicine and a career as a cancer specialist,” he says.

Dr. Sparano was born in what is now Montefiore New Rochelle Hospital and raised in the Bronx. He received his B.S. degree from City College of New York’s Sophie Davis School of Biomedical Education and his M.D. degree from New York Medical College. He has spent nearly his entire career at Montefiore and Einstein, since joining as a fellow in medical oncology in 1986.

As director of breast medical oncology at Montefiore and associate director for clinical research at the NCI-designated Albert Einstein Cancer Center, Dr. Sparano is well known for his pioneering research using molecular and genetic profiling for diagnosing and treating breast cancer, lymphoma and HIV-associated cancers. But he is especially proud of his efforts to enroll greater numbers of women of color in cancer clinical trials.

The eroding distinction between cancer research and care

“Access to clinical trials is now an integral part of providing high-quality cancer care,” says Dr. Sparano. “From tests that focus on the genomics of a person’s tumor to new immunotherapies, experimental diagnostics and treatments are making personalized medicine a reality for many patients with cancer.” 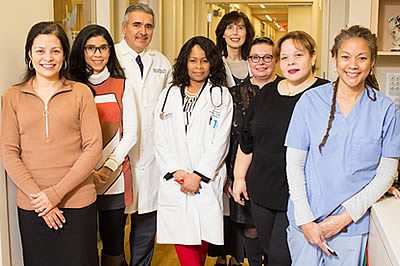 Dr. Sparano and teamDr. Sparano is working to bring the benefits of clinical trials and cutting-edge care to residents of the Bronx. “The burden of cancer falls disproportionately on our country’s minority populations,” he notes. “Men and women of color have higher cancer incidences and higher death rates than white Americans. They also tend to be diagnosed later in the course of their disease and have less access to proven-effective preventive and treatment measures and to health insurance to cover costs. Helping these populations gain access to cancer clinical trials is crucial to improving the clinical cancer care we can offer them.”

For example, says Dr. Sparano, “We've learned from our breast-cancer clinical trials that black women taking the chemotherapy drug Taxol for some reason are twice as likely as white women to develop the serious side effect of neuropathy, or peripheral nerve damage. We just published a study that looked at the genetics and identified the variant that causes this side effect. We’ve also learned that black women with estrogen-receptor-positive cancer have a higher risk of recurrence than other women, despite receiving the same therapy. We’re designing studies to find what the causes may be.”

To enroll more people of color in clinical trials, Dr. Sparano tries to publicize those trials as widely as possible.

"Studies show that the single most-important reason that patients enroll in clinical trials is their physicians’ recommendation," he says. “So I’ve made it a priority to inform doctors in the Einstein-Montefiore's network about available clinical trials, offering details that could motivate their patients to participate in trials that may help them.”

“Access to clinical trials is now an integral part of providing high-quality cancer care. From tests that focus on the genomics of a person’s tumor to new immunotherapies, experimental diagnostics and treatments are making personalized medicine a reality for many patients with cancer.”

As with most clinical trials, those that evaluate treatments for breast cancer have traditionally recruited mainly white women. Twenty years after Congress mandated that research funded by the NIH include minorities, fewer than five percent of clinical trials participants nationwide are non-white. By contrast, about two-thirds of participants in Montefiore-Einstein cancer clinical trials are people of color, reflecting the institutions’ strong efforts to reach out to the populations they serve.

Partnering with the National Cancer Institute

In 2014, Montefiore and Einstein were awarded a five-year, $3.4 million grant from the National Cancer Institute to conduct multi-site cancer clinical trials and research to reduce healthcare disparities in cancer care. The award came from the recently established NCI Community Oncology Research Program (NCORP). This national network of investigators, cancer care providers and academic institutions is conducting research to improve cancer diagnosis, treatment and management, particularly in minority and underserved communities. Montefiore-Einstein was chosen as one of 12 NCORP Minority/Underserved Clinical Sites.

The Montefiore-Einstein NCORP program is directed by Dr. Sparano, who leads efforts in cancer therapeutics, and by Bruce Rapkin, Ph.D., professor of epidemiology & population health at Einstein, who focuses on cancer control and delivery of care. Dr. Rapkin, a psychologist, was recruited to Einstein from Memorial Sloan-Kettering Cancer Center in 2009. He works to develop community interventions around cancer and to improve the quality of life for medically underserved individuals and communities. 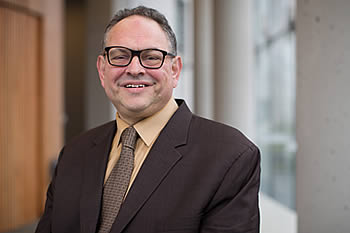 Bruce Rapkin, Ph.D.“Not only does quality cancer care need to be available to people of color and underserved groups, but we need to remove barriers to quality care by improving people’s health literacy and their knowledge of preventive measures,” says Dr. Rapkin. “NCORP is allowing us to study how best to accomplish that. It’s also helping us devise strategies for bringing primary care physicians into this educational effort so they can advise patients on the best possible measures for reducing risks for cancer—especially those types that are especially common in underserved communities, including lung, colorectal and breast cancer.”

Dr. Rapkin says that “one of the most exciting aspects of the NCORP enterprise” is developing new partnerships with Montefiore’s network of cancer care providers and support services.

Dr. Sparano hopes that NCORP will bring the latest advances in cancer treatment to people who all too often don’t benefit from them. “Cancer mortality rates are declining rapidly nationally, as a result of better screening and prevention and improved treatments derived mainly from clinical trials,” he says. “But improvements have lagged in minority populations, and the NCORP mechanism is allowing us to integrate new approaches that are helping us address disparities in all those areas, including treatment. Ideally, NCORP will bring us closer to our goal of offering every patient the opportunity to participate in a clinical trial if it's appropriate for their specific situation.”