Heart disease is the leading cause of death in the United States.  According to the Centers for Disease Control and Prevention, heart disease kills more than 600,000 Americans each year—one in every four deaths in the country.

The most notorious and immediate cause of heart-disease deaths is a heart attack, caused when a blood clot forms in a coronary artery and kills heart muscle cells. Each year about 40,000 people die within 30 days of a heart attack. But many more deaths occur when nonfatal heart attacks damage the heart so severely that they lead to heart failure, the impairment of the heart’s pumping ability.

Richard N. Kitsis, M.D., (r) with Yun Chen, Ph.D.The American Heart Association estimates that 5.7 million Americans are living with heart failure. Symptoms include breathlessness, fatigue and leg or body swelling that ultimately precludes normal activities. More than half of heart-failure cases stem from coronary heart disease—often meaning a previous heart attack. Typically, heart attacks have damaged muscle of the left ventricle, the heart chamber that pumps blood throughout the body. Loss of tissue puts an extra burden on the remaining heart muscle, causing it to become dysfunctional over time.

Once heart failure develops, the prognosis is grim: Studies show that half of people diagnosed with heart failure will die within five years, and the Centers for Disease Control and Prevention estimates that heart failure contributes to more than 300,000 deaths each year. "Dying from heart failure is not a pleasant way to go," says Richard Kitsis, M.D., professor of medicine and of cell biology, director of Einstein’s Wilf Family Cardiovascular Research Institute and the Dr. Gerald and Myra Dorros Chair in Cardiovascular Research at Einstein. "The condition can worsen over several years before it finally proves fatal."

Dr. Kitsis and his Wilf Institute colleagues are focusing on several strategies to combat heart failure. These include: minimizing the tissue damage caused by heart attacks; growing healthy coronary arteries from a person’s own heart cells to replace arteries occluded by heart disease; and stopping heart failure from progressing once it occurs.

The amount of dead heart muscle from a heart attack determines whether or not heart failure will develop. Much of this heart-muscle death is actually induced by heart cells themselves. When confronted by lack of oxygen and other heart-attack stressors, these cells essentially kill themselves by activating cell-death pathways. In a 2002 paper in Circulation, Dr. Kitsis and his colleagues demonstrated that, by inactivating various genes, they could block these pathways and preserve functional heart muscle.

Evripidis Gavathiotis, Ph.D.Kitsis’ lab has previously identified potential drug candidates using robots to screen hundreds of thousands of chemicals for their abilities to block heart muscle cell death (Probe Reports from the NIH Molecular Libraries Program, 2010).  But, it was a chance observation that focused attention on designing a drug against one particular "drug target": BAX.  This protein had long been known to contribute to a form of cell death known as apoptosis.  But the Kitsis lab also discovered that BAX unexpectedly plays a critical role in a second form of cell death called necrosis, which they reported in a PNAS paper in 2012. The fact that BAX plays these dual roles—in necrosis and apoptosis—means that "blocking" BAX could reduce cell damage from a heart attack while also preventing the development of lethal heart failure.

The central challenge is developing novel drugs that can be given to patients to reduce cell death in the early hours of a heart attack.  Dr. Kitsis partnered in this effort with Evripidis Gavathiotis, Ph.D., associate professor of biochemistry and of medicine, and a chemical and structural biologist, who has already created drugs that modulate diverse cellular targets in cancer and aging. Most important, Dr. Gavathiotis’ previous work defined the structure of BAX, which was reported in Nature in 2008, and how its shape changes during apoptosis. These studies enabled the discovery and rational design of small molecule inhibitors.

As a logical next step in their research, Drs. Kitsis and Gavathiotis have joined forces to develop BAX inhibitors that limit the massive cell damage that occurs during a heart attack. Their work is funded in part by a three-year, $750,000 American Heart Association Collaborative Sciences Award.

"We now have several small molecules that target BAX and that we are developing further," says Dr. Gavathiotis.  These small molecules render rodent and human heart muscle cells resistant to cell death induced by a variety of toxic situations, including the deprivation of oxygen, or conversely, the overabundance of oxygen, which occurs when blood flow during a heart attack is re-established using angioplasty.

"Ideally," says Dr. Gavathiotis, "our BAX inhibitors will both minimize the tissue damage from heart attack and preserve heart function. If so, we’ll work to optimize the inhibitors so they can be evaluated in clinical trials."

Dr. Kitsis stressed the overall goal of new drug development: "While the design of an effective and safe drug is a complex process, the hope is that this approach will lead to a novel therapy to reduce mortality from one of the world’s major killers."

In 2012, Bin Zhou, M.D., Ph.D., professor of genetics, of pediatrics and of medicine at Einstein, published important and surprising findings in Cell about where the coronary arteries originate during development. 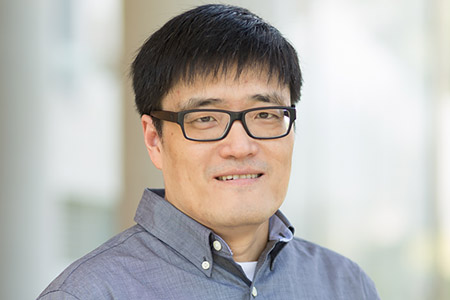 Bin Zhou, M.D., Ph.D.The findings were important because coronary arteries are the focus of heart disease: they provide heart muscle with the oxygen and nutrients they need to pump blood, and their blockage from heart disease triggers heart attacks. They were surprising because scientists had assumed that the coronary arteries couldn’t originate from the cells that turned out to produce them.

Previous studies had suggested that the coronary arteries arise during development from cells of the sinus venosus (a heart cavity present only in embryos) or from the epicardium (the heart’s outermost layer). Dr. Zhou and his Einstein colleagues showed that the coronary arteries largely come from cells of the endocardium, the heart’s innermost cell layer. More specifically, they arise from endocardial cells lining the ventricles (the two large chambers of the heart).

"Prevailing wisdom held that endocardial cells are terminally differentiated, meaning they cannot become any other cell type," says Dr. Zhou. "But we showed that one population of ventricular endocardial cells is responsible for forming the coronary arteries." The finding has promising implications for preventing heart attacks as well as the heart failure that often result from them. 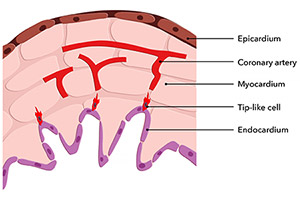 Click to enlargeSince publishing his 2012 paper, Dr. Zhou has been studying how those endothelial heart cells evolve into coronary arteries. His research group has discovered that they differentiate into tip-like cells, which play essential roles in vessel sprouting throughout the body but had never before been studied in the heart. Moreover, he has found the mechanism that regulates the formation of tip-like cells during coronary artery development.

"Tip-like cells are major functional cells for generating new vasculature," says Dr. Zhou. "In the heart, they spearhead the developing coronary arteries as they grow out of the endocardium en route to their final position near the ventricular surface." (See illustration.)

The formation and function of tip-like cells, Dr. Zhou has found, is regulated by a feedback mechanism involving two signaling pathways, VEGF and NOTCH. "Such a mechanism has been described for other vascular formations such as blood vessel formation outside the heart or associated with tumors," says Dr. Zhou. "We found that these signaling pathways are also involved in the developmental angiogenesis leading to coronary artery formation."

"So we know that coronary arteries originate from endocardially-derived tip-like cells and have identified the signaling pathways that regulate that process," says Dr. Zhou. "If the heart’s tip-like cells persist beyond embryonic development  into adulthood—something we’re now investigating—this knowledge may bring us closer to the day when coronary arteries can be synthesized in the lab and then implanted into heart-disease patients who can benefit from them." 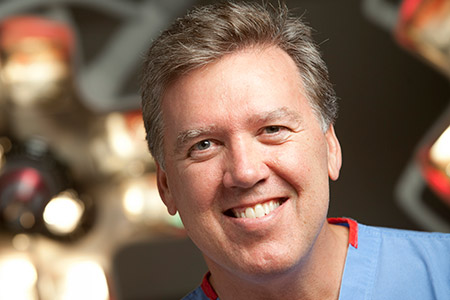 Robert Michler, M.D."Heart failure is often devastating to a patient’s quality of life and inflicts significant mortality," says Dr. Michler, who is also co-director of the Montefiore Einstein Center for Heart and Vascular Care. "Advances in medical and surgical treatment are helping to extend the lives of heart-failure patients. But unfortunately, the condition tends to worsen once it develops. With more than five million Americans now living with heart failure—a number expected to rise to eight million by 2030—we urgently need strategies to treat the condition differently and to keep it from progressing."

With that aim in mind, Dr. Michler and colleagues in 22 countries embarked on a major clinical trial.

To slow disease progression in heart-failure patients, doctors generally prescribe medical therapy set out in guidelines established by the American Heart Association and other organizations. "But in patients with coronary artery disease as the cause of the heart failure," says Dr. Michler, "it hasn’t been clear whether medicine is sufficient or even appropriate as the sole therapy." Decades earlier, studies had found that Coronary Artery Bypass Surgery (CABG) was effective for patients suffering from disabling angina (chest pain caused when heart muscle is deprived of blood) and multivessel disease, but heart-failure patients were very rarely enrolled in those studies.

Dr. Michler, chairman and principal investigator of the STICH Surgical Therapy Committee, and his international colleagues hypothesized that CABG plus medical therapy would improve survival and quality of life for patients with coronary artery heart disease and heart failure. So beginning in 2002, more than 1,200 patients fitting that description were enrolled in the Surgical Treatment for Ischemic Heart Failure (STICH) study and were randomly assigned to receive either medical therapy alone or medical therapy plus CABG.

After evaluating the long-term (10-year) effects of the two treatments, Dr. Michler and colleagues published their findings in The New England Journal of Medicine in 2016. The death rate from heart disease or any other cause was significantly lower among patients who had undergone CABG plus medical therapy than among those patients who received medical therapy alone.

"We’re gratified to have found that surgery adds such a dramatic benefit to heart-failure patients receiving medical therapy," says Dr. Michler. "Bypass surgery can help millions of Americans with heart failure live longer lives, lives of better quality and lives free of heart attack, stroke and hospitalization. Now we need to find even more effective treatments for stabilizing and even reversing heart failure—perhaps through regenerative surgery, in which we’d transplant immature progenitor cells into the damaged heart so that those cells would produce new blood vessels and new cardiac muscle cells."