For many years, Dr. Sanjeev Gupta, professor of medicine and of pathology, has been hosting physicians and scientists from around the world in his laboratory at Einstein’s Marion Bessin Liver Research Center and offering advanced training in the essentials of liver research, including cell and molecular biology techniques. 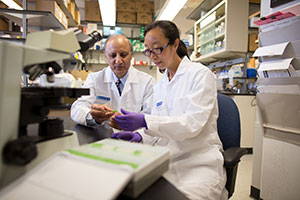 Research trainee Dr. Jinghua Liu with Dr. Sanjeev Gupta“The idea was to help countries that were somewhat behind in developing modern research capabilities, especially those related to translational research,” explained Dr. Gupta, who is also an attending physician in hepatology and gastroenterology at Montefiore, and serves as the Eleazar and Feige Reicher Chair in Translational Medicine at the College of Medicine.

Dr. Gupta’s lab receives an ongoing stream of applications from young physicians and scientists from countries such as India, China, Nepal, Pakistan, Russia, Brazil, Turkey and Egypt, as well as from Iraq, Syria and Iran. “I’ve had at least ten candidates who have funding from their own governments or institutions, eight of whom were able to come to Einstein for training using that support,” he said.

Most recent among those candidates was Dr. Jinghua Liu, a young obstetrician and gynecologist who was on the faculty at a university in Shanghai, China. Dr. Liu spent a year in the Gupta lab after winning a scholarship through a program sponsored by the Chinese government that supported “one year of research training in an outstanding U.S institution.”

As an obstetrician, Dr. Liu cares for significant numbers of pregnant women who suffer from debilitating liver diseases, often caused by hepatitis viruses. “I’ve always believed that a good doctor should be a good researcher, so I wanted to be at a prestigious research institution where I could learn skills in basic research relevant to my specialty,” said Dr. Liu. “I was impressed with the enthusiasm for research at Einstein.”

In Dr. Gupta’s lab, she learned advanced research methods by working on projects aimed at preventing replication of hepatitis B virus and the use of liver cell transplantation to cure acute liver failure in lab animals.

“This translational work lays a sound foundation for researching new ways to treat liver diseases in humans,” she said. “I’ve acquired valuable knowledge that will help my patients back home and also advance my career. I see a whole new world of possibilities.” 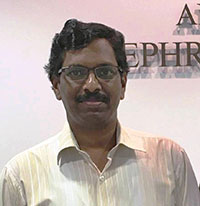 At Einstein, Dr. Chinnasamy investigated the effects of heavy metals, such as arsenic, on the liver. Contamination of water by arsenic and other heavy metals has become an increasing problem in Pondicherry as well as many other parts of the world, including the United States. His research in Dr. Gupta’s lab examined whether arsenic could worsen liver toxicity of other metals, such as copper, which leads to a rare condition called Wilson’s disease.

Doing so required running RNA sequencing studies in conjunction with bioinformatics approaches in order to analyze large datasets. He also examined the effects of arsenic on the process of differentiating pluripotent human stem cells into liver cells. In assisting lab team members with their projects, he used cell transplantation methods, too. His hard work led to several research presentations in national meetings as well as collaborations with members of the Gupta lab on their projects.

“I truly appreciated the unlimited support I received throughout my experience at Einstein, both on the professional and personal level,” said Dr. Chinnasamy. “Everyone helped me face the challenges of research and life in a new environment, so that the lab felt like a second home to me.”

He added, “Dr. Gupta made me feel secure and comfortable. He is a source of motivation and inspiration to me.” 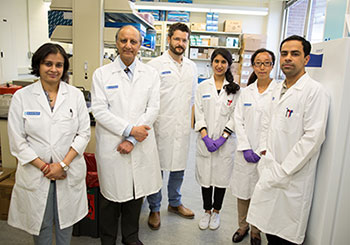 Members of the Gupta lab team with Dr. LiuIn working with his trainees, Dr. Gupta is involved in all facets of the training process, from experimental design and performance of studies to data interpretation, presentations and preparing manuscripts.

When asked about the value of the visiting physician/scientist initiative, he said, “The research the visiting trainees do has led to many publications and presentations. Several of these overseas trainees are now full professors at their home institutions, one is dean of a medical school, and others are contributing to the education of their students or the care of patients as well as to research in their homelands.”

He added, “There are tangible benefits for my own team, too. In sharing what they know with others, they’re able to refine their own skills, and they can expand their research experience through additional projects. In several instances, we’ve been able to accelerate progress in our own investigations.

“The greatest reward is seeing how much excitement and learning these enthusiastic trainees and my lab team exchange,” he said. “Interactions with talented scientists and clinicians often lead to interesting new ideas.”