Home > Features > “Junk” Science: One Scientist's Quest To Understand Cellular Housekeeping and Its Influence on Aging and Age-Related Diseases

“Junk” Science: One Scientist's Quest To Understand Cellular Housekeeping and Its Influence on Aging and Age-Related Diseases

While growing up in Spain, Ana Maria Cuervo, M.D., Ph.D., often heard her mother say, “In a clean house, everything works better.” Young Ana Maria didn’t make much of it at the time, but this sage advice would become the guiding principle of her scientific career. 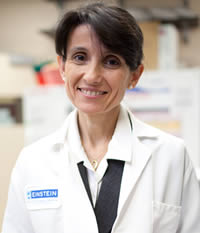 Ana Maria Cuervo, M.D., Ph.D.Dr. Cuervo is a physician-scientist who specializes in autophagy—from the Greek words “auto” and “phagein,” meaning “self-devouring”—a fancy term for cellular waste management. Almost every type of cell in the human body uses a variety of strategies to degrade and recycle old, mutated or otherwise damaged proteins and other molecules, keeping cells’ interiors spic and span.

Although autophagy was discovered in the 1960s, the biomedical community initially paid little attention. After all, who cares about the trash, so long as it’s discarded periodically? But over time, researchers realized that good cellular housekeeping is not just for neat freaks but is critical to human health. What’s more, since autophagy slows down with age—one of Dr. Cuervo’s major discoveries—therapies to enhance autophagy may help prevent or reverse a range of age-related diseases and perhaps slow the aging process itself.

Autophagy is finally basking in the limelight. In October, the Japanese scientist Yoshinori Ohsumi was awarded the 2016 Nobel Prize in Physiology or Medicine for his pioneering studies of the genes and mechanisms that underlie this vital process.

“The honor recognizes our field of autophagy and how basic research—Dr. Ohsumi studies yeast genes—can have a transforming impact on biomedical science,” says Dr. Cuervo, professor of developmental and molecular biology, of anatomy and structural biology, and of medicine, co-director of the Institute for Aging Research, and the Robert and Renée Belfer Chair for the Study of Neurodegenerative Diseases at Einstein. “The discovery of the autophagy genes in yeast has allowed researchers including me to establish connections between autophagy failure and many human disorders including cancer, diabetes and Alzheimer’s disease. Academic and industry labs are now developing drugs that target those genes, with the goal of curing those diseases by modulating autophagy.” 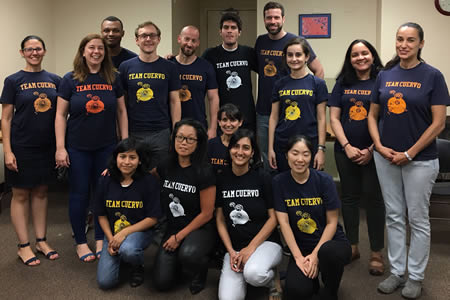 The Cuervo Team, Summer 2016Dr. Cuervo won recognition early in her career for dispelling the notion that lysosomes—the cell’s enzyme-filled recycling centers—indiscriminately degrade proteins. Along with her mentor (the late J. Fred Dice of Tufts University School of Medicine), she then identified the molecular machinery that drives this selective recycling process, which they dubbed chaperone-mediated autophagy (CMA). This type of autophagy involves specialized molecules that “guide” old and damaged proteins to the lysosomes for digestion.

“CMA makes sure your proteins behave—kind of like the old-fashioned chaperone that escorted you and your boyfriend to the movies,” says Dr. Cuervo, whose findings were published in the journal Science in 1996, a coup for such a young scientist.

Since joining the Einstein faculty in 2001, Dr. Cuervo has made several other major discoveries in the field, including finding that:

Dr. Cuervo’s discovery that CMA naturally declines with age and is impaired in several age-relative diseases has opened up a whole new perspective on the biology of aging.

“Healthy older people can lose, say, 50 percent of their ability to recycle materials and they’ll still do reasonably well,” says Dr. Cuervo, whose words tumble out by the dozen as she discusses her favorite topic. “But problems can arise for people who produce a mutant protein—as in some forms of Alzheimer’s disease—but whose efficiency at getting rid of those proteins decreases significantly. This leads mutant proteins to accumulate even as their rate of production stays the same, ultimately contributing to neurological problems.” 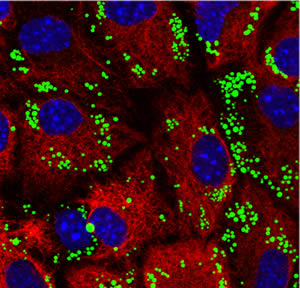 While autophagic aging may be inevitable, the good news is that it may be treatable. A study led by Dr. Cuervo’s husband, Fernando Macian-Juan, M.D., Ph.D., professor of pathology, found that centenarians have naturally robust autophagy, which presumably contributes to their longevity. “If we can determine the genes responsible for their youthful autophagy, we might be able to mimic this effect with drugs or other therapies,” says Dr. Cuervo.

Dr. Cuervo’s research team is already testing autophagy-boosting drugs, which have shown promise in animal models. In the meantime, people of any age can take measures to optimize their cell recycling. “Basically, follow your grandmother’s advice: eat a balanced diet, get enough sleep, and exercise,” she says. “Each of these activates autophagy.”

Dr. Cuervo and her team are also investigating autophagy’s role in cancer, which primarily affects older people. “As you age, the decline in autophagy’s efficiency makes your cells—particularly your DNA—more vulnerable to damage,” she explains. “And this increases the possibility of a normal cell transforming into a bad cell—a cancer cell.”

Recently, Dr. Cuervo found that autophagy plays yet another role in cancer: Cells ramp up their CMA when they become malignant. “Since cancer cells have such a high rate of growth, they need a huge amount of nutrients, which they get through efficient recycling of their components,” she says. “This would also explain why cancer cells can be so resistant to chemotherapy. Chemo aims to cause damage to the cancer cells. But because their CMA is so good, cancer cells can handle that damage very well. It’s like they’re saying, ‘Bring it on!’”

In one of her many NIH-funded studies, Dr. Cuervo is attempting to find how cancer cells that develop in older people rev up their CMA. “That’s what we’d like to achieve in normal cells of the elderly,” she says.

“I’m not claiming that ‘fixing’ autophagy will be a cure-all, but it may be able to do a lot,” says Dr. Cuervo. “Autophagy is a fundamental mechanism in the cell. And if the cell is cleaning up after itself, other things in the body will start working better.”

Essentially what her mother said all those years ago.