Home > Features > An Introduction to Medicine for Minority or Disadvantaged Students

An Introduction to Medicine for Minority or Disadvantaged Students

“Today is the beginning of your dreams,” said Elizabeth de León Bhargava, New York State deputy secretary for labor, during her keynote address at the graduation ceremony for this year’s Summer Undergraduate Mentorship Program (SUMP), on August 4 in Lubin Dining Hall. The event marked the end of the six-week program, which each summer offers 14 undergraduate  students from groups underrepresented in medicine or from economically disadvantaged backgrounds a chance to learn more about the medical profession. 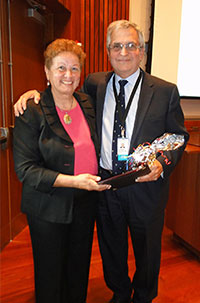 Dr. Nereida Correa presents Dr. Fernando Camacho the 2016 Helen Trias Rodriguez Award, given since 2012 to recognize an individual’s extraordinary commitment, advocacy, guidance and devotion toward enriching the lives of SUMP students. Dr. Camacho has served as a SUMP clinical mentor since the program’s inception.“Taking part in SUMP allows students to get an inside view of what the practice of medicine is about, and to learn about issues that concern them,” said former SUMP participant Natalia Rodriguez.

Led by the Hispanic Center of Excellence (HCOE) directors Drs. Hal Strelnick, Nereida Correa, and Nelly Maseda, SUMP is one of several pipeline programs under Bronx HOPE (Health Opportunities Partnership-Einstein). SUMP provides students the opportunity to shadow local physicians, many of whom are from Montefiore and Jacobi. Students also attend lectures on health disparities and hands-on workshops, and they complete a capstone project.

“Through SUMP, you gain a well-rounded perspective of issues related to health disparities and learn how to communicate effectively with patients to provide them with the best care possible,” added Ms. Rodriguez, who is currently an HCOE research fellow.

Topics for students’ projects are inspired by their clinical experiences and/or lectures, and are presented to an audience of SUMP peers, family members, physician mentors and invited Einstein faculty. This year’s presentations touched on a broad range of issues, from “Major Depressive Disorder in African Americans” and “Health Disparities among the LGBT Community” to “Asthma Disparities in Minority Populations within the South Bronx” and “Health Disparities among Hispanic and African Americans with Alzheimer's Disease.”

Recalling his mentor M.D./Ph.D. student Dayle Hodge, Justin Maldonado, a rising senior at John Jay School of Criminal Justice, noted: “Dayle was so much more than my research mentor—I looked to him as a role model. I will be forever grateful to him.” 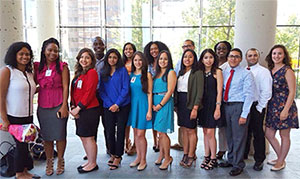 This year’s SUMP studentsMr. Maldonado is following a path that Ms. de León Bhargava said she had once considered. “At one point I had to choose between law school and med school,” she said. “Had I been in a program such as SUMP, I might have pursued becoming a doctor.”

At the graduation, Ms. de León Bhargava reminded the students of the importance of pipeline programs in minority communities like the Bronx, noting, “Education has opened so many doors for me… Do not take this program lightly. It offers so many opportunities for expanding your knowledge and experiences.”

Courtney-Lynn Harvey, a rising senior at Andrews University, is glad she sought out SUMP to gain more exposure to medical school and broaden her horizons. “Even though I was born in and live in the Bronx, I didn’t know much about health disparities,” she said. “Shadowing a physician has taught me how important it is to understand patients’ stories.” 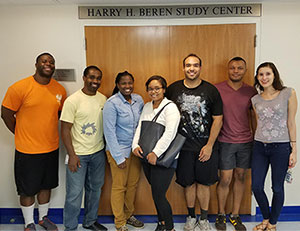 Einstein Ph.D. and M.D./Ph.D. students serve as research mentors for the SUMP studentsFollowing their summer in SUMP, many of the undergrads who are underclassmen return to college, armed with new knowledge and motivation. Some, like Ms. Rodriguez, return to Einstein in subsequent summers to take part in other pipeline programs offered through Bronx HOPE. These include Einstein Enrichment Program (EEP) and Montefiore Health Opportunities Program (Monte-HOP).

Those who have recently graduated college may look for work within healthcare fields or prepare their applications for medical school or graduate programs in other health fields such as dentistry, occupational or physical therapy, or nursing.

At least one former SUMP participant is among the current crop of medical students at Einstein. Bronx native Laura Andaluz-Scher, who attended SUNY-Binghamton, took part in SUMP, and helped coordinate the program with Ms. Rodriguez the summer following her graduation from college. During a gap year before applying to medical school, she worked as an MCAT tutor for Kaplan, helping other students prepare for the all-important entry exam that is part of the medical school application. She then made her own applications and is among the first-years in the class of 2020.

“I learned a lot about myself and the medical field through my participation in SUMP,” said Ms. Andaluz-Scher. “And though I was accepted at some other New York City medical schools, my connection to Einstein made deciding where to go easy. I’m excited to be here, pursuing my dream of becoming a doctor.”

Undergraduate students, Einstein students and physicians interested in SUMP can learn more about the program by visiting the SUMP website, or by e-mailing questions to Cara Stephenson-Hunter, Bronx HOPE program manager, at hcoe.sump@gmail.com.